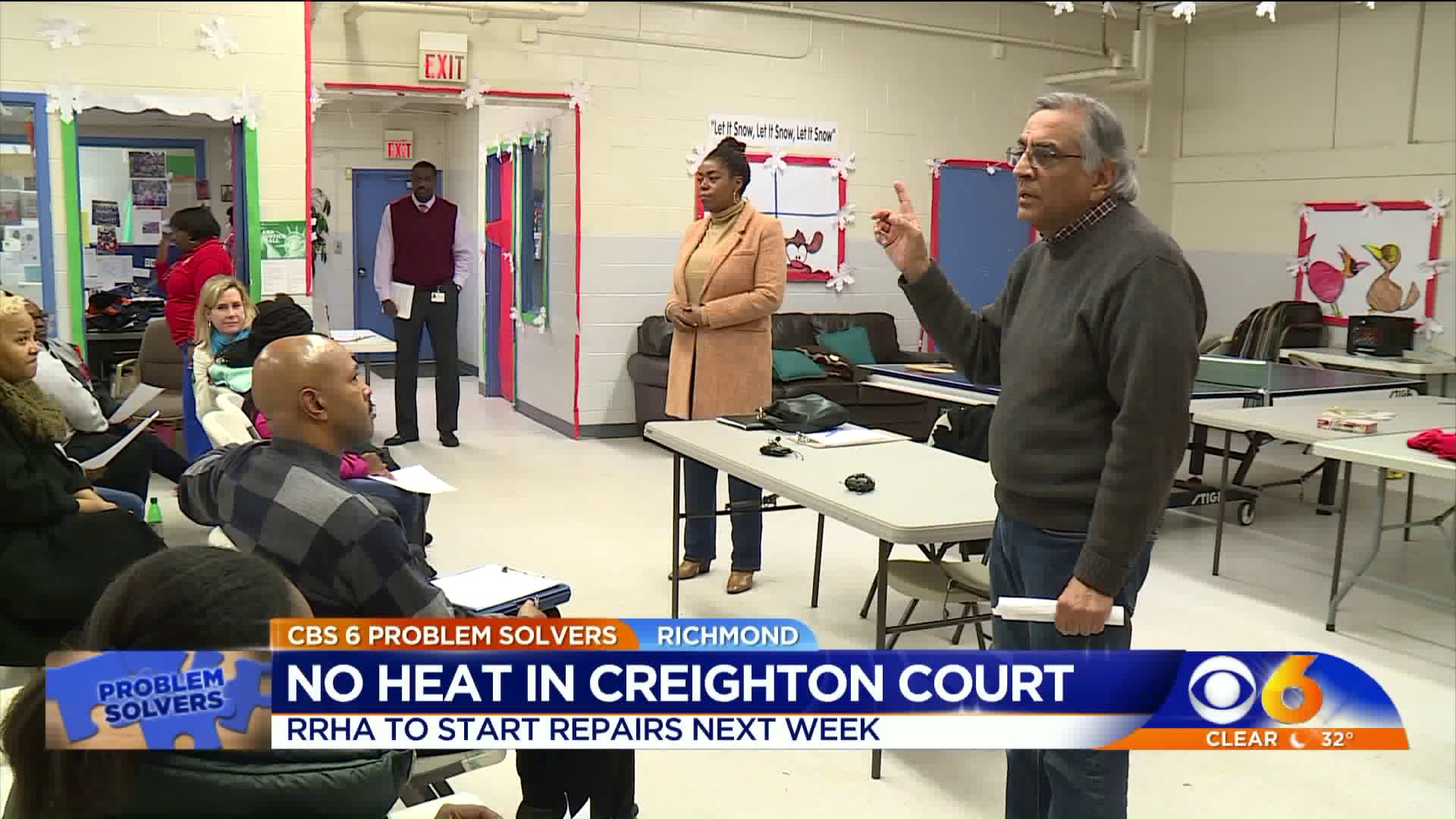 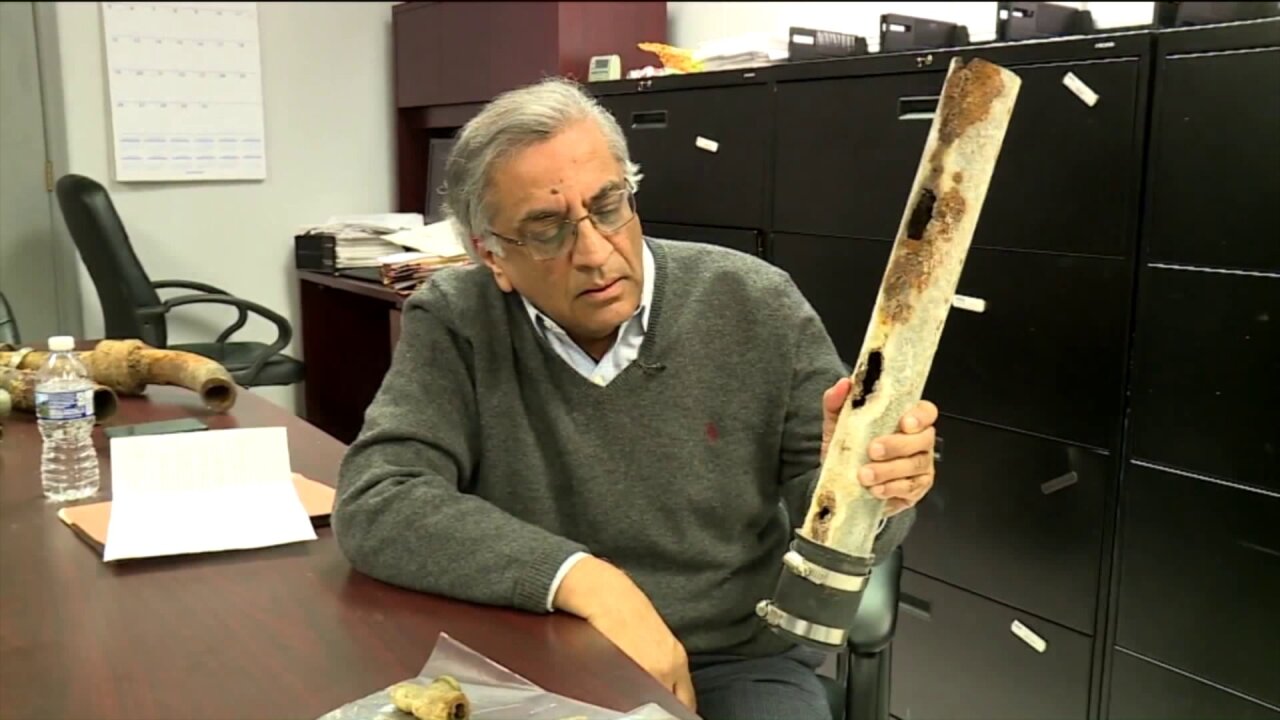 RICHMOND, Va. – The man at the helm of the Richmond Redevelopment and Housing Authority (RRHA) for the last three years has resigned, officials confirmed to WTVR CBS 6 reporter Melissa Hipolit.

Somanath had been scheduled to brief Richmond City Council members Monday about ongoing heating issues at Creighton Court, one of the six massive subsidized housing communities run by the agency.

The board appointed Somanath, the former president of Richmond's Better Housing Coalition, to serve as interim CEO in January of 2015 while the agency conducted a nationwide search for a new leader after embattled CEO Adrienne Goolsby resigned.

“This Board recruited T.K. Somanath out of retirement to help the RRHA though a transition period," Adams said. "We are grateful for his service to the Authority during the past three years and notably his accomplishments in beginning the critical work of replacing RRHA’s aging public housing portfolio."

Adams said the board's Governance Committee is heading the search for Somanath's replacement.

Somanath recently sat down with the CBS 6 Problem Solver reporter Melissa Hipolit on Jan. 9 to answer questions following a  rally where a crowd called for his removal over ongoing heating issues at Creighton Court.

The CBS 6 Problem Solvers first uncovered the heating issue when we interviewed a man who said he has not had heat at Creighton Court for six years.

The circumstances around heating problems in multiple public housing units managed by the RRHA have only grown since CBS 6 first reported on the issue in Creighton Court. Now Somanath is saying that some officials knew of the problem a year ago but a lapse in communication kept senior management from being informed and prepared.

“Yes, there has been some lapses. I am the first one to admit we are not perfect,” Somanath said.

Somanath said RRHA site maintenance at Creighton learned roughly a year ago they would have to shut off the heat in four buildings, but senior management was not informed.
Then in October 2017, as temperatures turned colder, senior management learned those four buildings and three more had the heat turned off --with that number eventually growing to 12.

“Now we have put a system where field office really has to inform senior staff members so we can take immediate action,” Somanath said.

But McArthur Jefferies said he's been without heat for six years, and is often just given a space heater to help with frigid temperatures.

“Do you feel like you did your best with the October situation or could you have responded sooner?” Hipolit asked.

“I think if we can improve the communications between the maintenance folks at field level to central heating crews and senior staff, I think we can take immediate action,” Somanath replied.

Somanath showed us the old deteriorated pipes in the buildings that caused the need to shut off the heat. They’re rusted, leaking and he said their condition puts the ceilings at risk for collapse.

“For example, this is a pipe that goes to the radiator hot water pipe, and it’s almost 80-90 percent blocked so the radiators don’t get the circulation it needs to provide heat,” Somanath said.

He said the same thing happened in November in Gilpin Court and effected more than 300 units.

Somanath was blunt when he said there’s no way to guarantee it won’t happen again, due to the aging infrastructure.

“Unless we change the piping systems in all these 3,000 some public housing units we are always going to have problems in the winter,” Somanath said.

Somanath said the capital needs facing RRHA far exceed what HUD provides, and while he understands activists and residents’ concerns, he said he doesn’t believe ousting him will fix the problem.

In a letter to Creighton Court residents on Thursday, RRHA officials said they will begin restoring heat to 50 families whose apartments don't have it next week.

The Department of Housing and Urban Development confirmed that heat does not work in more than 50 units and a total of 12 apartment buildings.

The U.S. Department of Housing and Urban Development (HUD) and the RRHA initially gave dozens of residents space heaters, then relocated them to vacant units or hotels until heat can be restored to their units.

Because the original heating system is so damaged, the RRHA says baseboard heating will now be installed in the units without heat.

“We expect that work will begin next week,” read the letter.

Because the original heating system is so damaged, the RRHA says baseboard heating will now be installed in the units without heat.

Here is an update on the Creighton Court heat situation. To be resolved by Feb. 28th, according to @VibrantRRHA @CBS6 pic.twitter.com/YCKi4GmOZV

“We expect that work will begin next week,” read the letter. “The installation for each building is expected to take about a week to complete.”

They went on to say it will take contractors about 10 to 12 hours to restore heat in each unit.

Effected families are going to stay in a temporary location while the work is being done.

The RRHA expects to have heat fully restored in all 12 buildings by no later than February 28, 2018.

Former CEO resigned in January of 2015

The head of the public housing authority in Richmond before Somanath also resigned from her post.

Adrienne Goolsby resigned in January of 2015 after serving less than three years on the job.

In a news release from RRHA, Goolsby was credited with raising ratings for the beset housing system.

However, Goolsby was also at the helm when longtime RRHA Police Chief Hal Hazelton was placed on administrative leave and then fired with no explanation.

Additionally, a CBS 6 News Investigation in November of 2013 revealed a master set of keys to more than 4,000 Richmond homes stolen from an unlocked vehicle.

The RRHA knew the keys were missing, but instead of telling residents, they started replacing locks over the course of a few weeks. The final price tag was nearly $300,000.

Nearly a week after the first report aired, the agency told residents they acted appropriately to protect residents – and that a new policy was in place to make sure this does not happen again.

During that time Goolsby pledged that she was  committed to openness and transparency, but would not sit down with CBS 6 for an interview.

Depend on WTVR.com and CBS 6 News for complete coverage of this important local story.