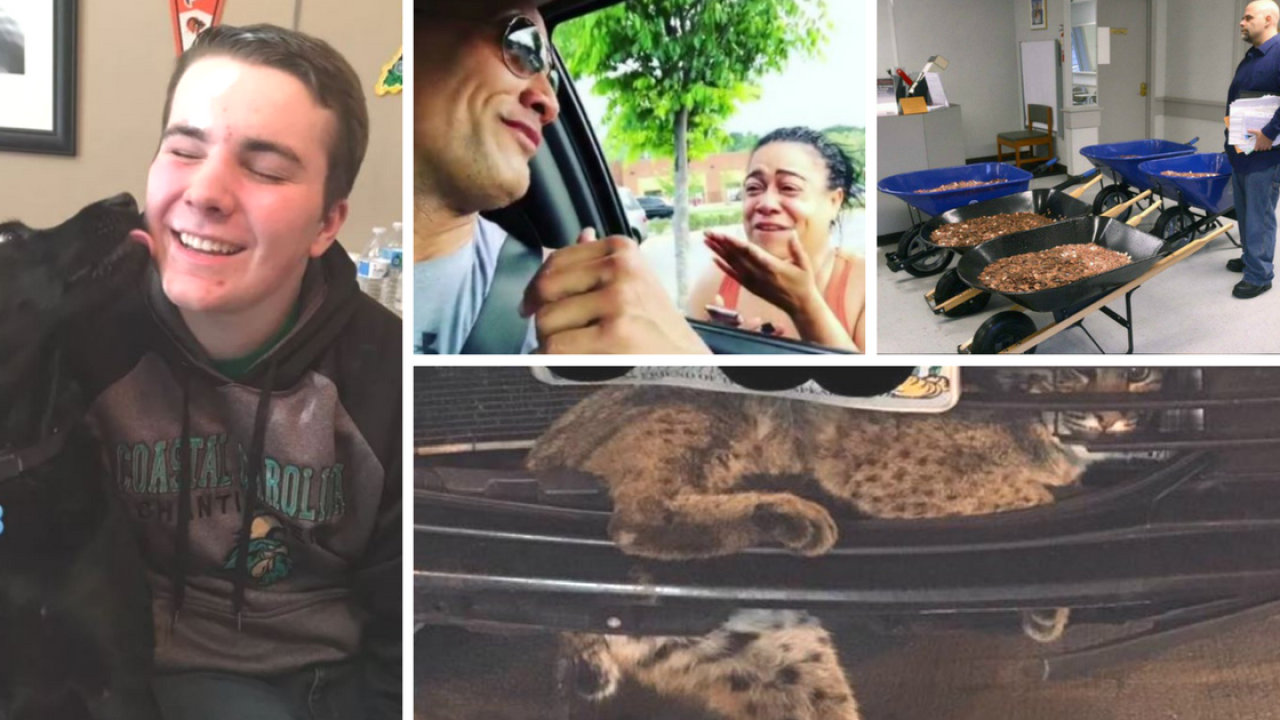 RICHMOND, Va. – There was no shortage of terrible tragedies around the world and right here in metro-Richmond in 2017. In fact, our most-clicked stories were very grim – murder, drugs, dog mauling, and violence surrounding the rise of white nationalist agenda.

That’s why this particular roundup is to shine a light on our more positive stories, in the order they received traffic (just not the most traffic, because those are the hard news stories).

Movie star Dwayne “The Rock” Johnson owns a farm outside Charlottesville, Virginia. That is known to many of his adoring fans. But what you may not know, is that when Johnson stays at the farm, he goes into town to workout at a public gym. But a group of women discovered him one day….

Stafford County high school students got a big surprise when they opened their yearbooks this year and saw a photo of their four-legged classmate. The photo shows student Andrew Schalk and his service dog Alpha.

Man wheels 300,000 pennies to DMV to inconvenience the state

There is a chance most readers understand the feeling of hopeless inconvenience. Well, Nick Stafford knew he had to do the right thing and pay DMV his car taxes, but he did it using 300,000 pennies. He hired 11 people to help him put the pennies into wheelbarrows.

Chances are this bobcat never wants to see another vehicle again. And luckily he gets the chance to avoid them. If bobcats get nine lives, this trip must have used up several.

Malakai, 9, is looking for a safe, loving forever home

In November, we participate in National Adoption Month with our “30 Kids in 30 days” initative. Malakai’s story reached a lot of people, and went “viral.” He was placed with a foster home, with lots of interest to adopt.

Where Solange Knowles shopped and dined while in Richmond

A lot of celebrities have made headlines during their visit to Richmond — Justin Timberlake, Daniel Day Lewis, Claire Danes, Alton Brown, Daniel Radcliffe, David Arquette – to name a few. This year the most clicked celebrity story was about Solange Knowles, the 31-year-old Grammy-award winning singer and little sister of music superstar Beyoncé.

She spent time exploring the city with her husband, Richmond-native Alan G. Ferguson. They stayed at the Quirk, went shopping and eating.

Henrico mom named one of America’s Most Beautiful truckers

Fifteen-year trucking veteran Rebekah Meadows has a lot to be proud of these days. The Henrico woman is a mother to three girls, a wife, she raises American Saddlebred Horses, and she was recently named one of the Most Beautiful truckers in the US by Overdrive online.

The original plan was for Sepp Shirey to carry the ball against Varina for a few yards before being tackled by two-hand touch. But his play covered 80 yards and had the football players and the crowds going crazy.

Richmond LOVES restaurant weeks and food festivals. The intent of the event was to reach the local foodie community with the food and stories of black entrepreneurship, and to promote economic diversity. Let’s just say it was a hit – with several restaurants even running out of food — and it will return in 2018.

Chester mom can’t walk or talk, but has job, family and happiness

One of the most inspirational stories this year is one about maintaining a positive attitude amid the worst circumstances – and focusing on what you have, not what you don’t. Chanel Hobb was diagnosed with ALS or Lou Gherig’s disease, which affects a person’s muscles from moving. People living with the terminal disease, like Chanel, cannot move, but their mind remains unaffected. But she was determined not to miss a beat.