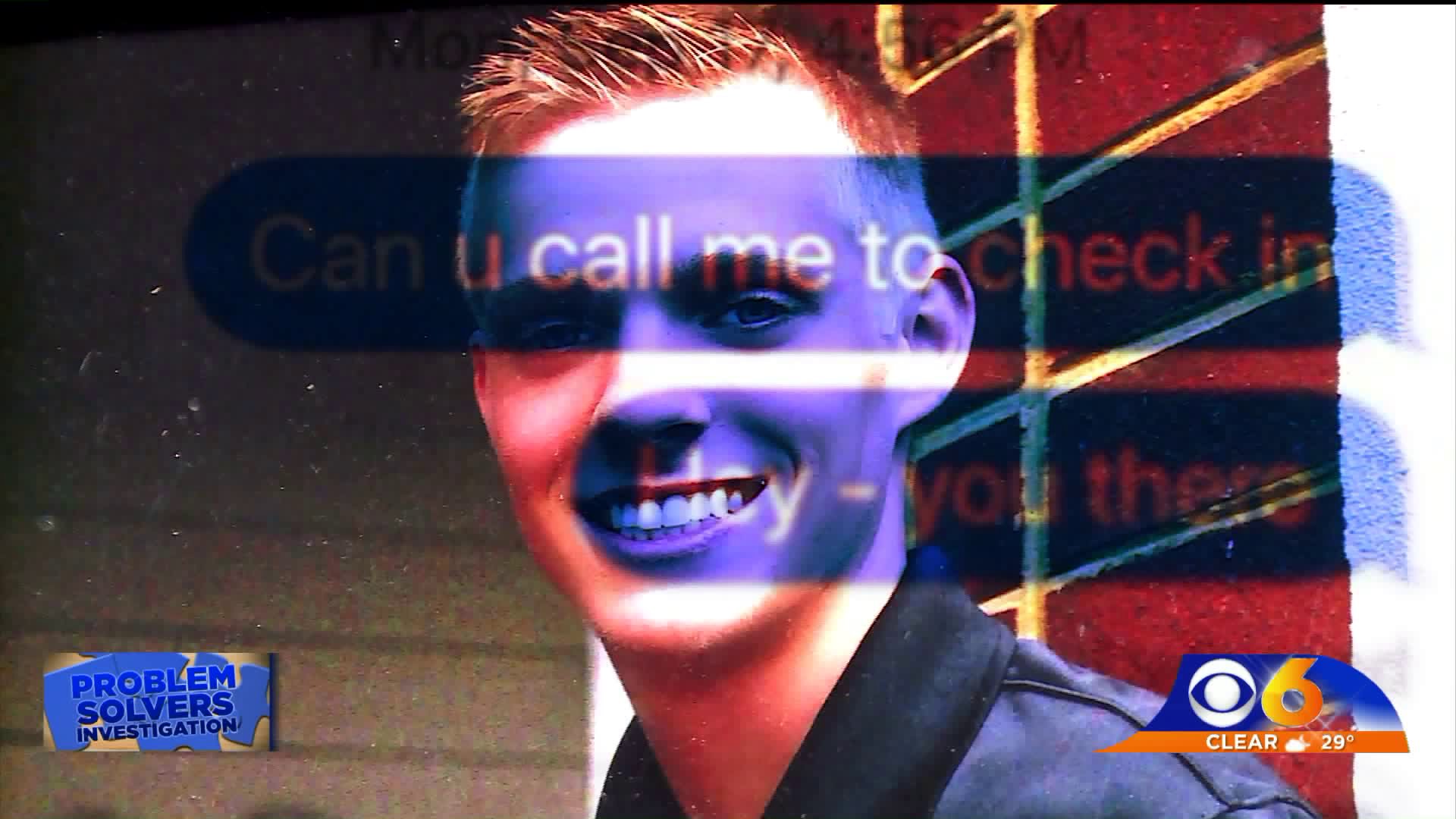 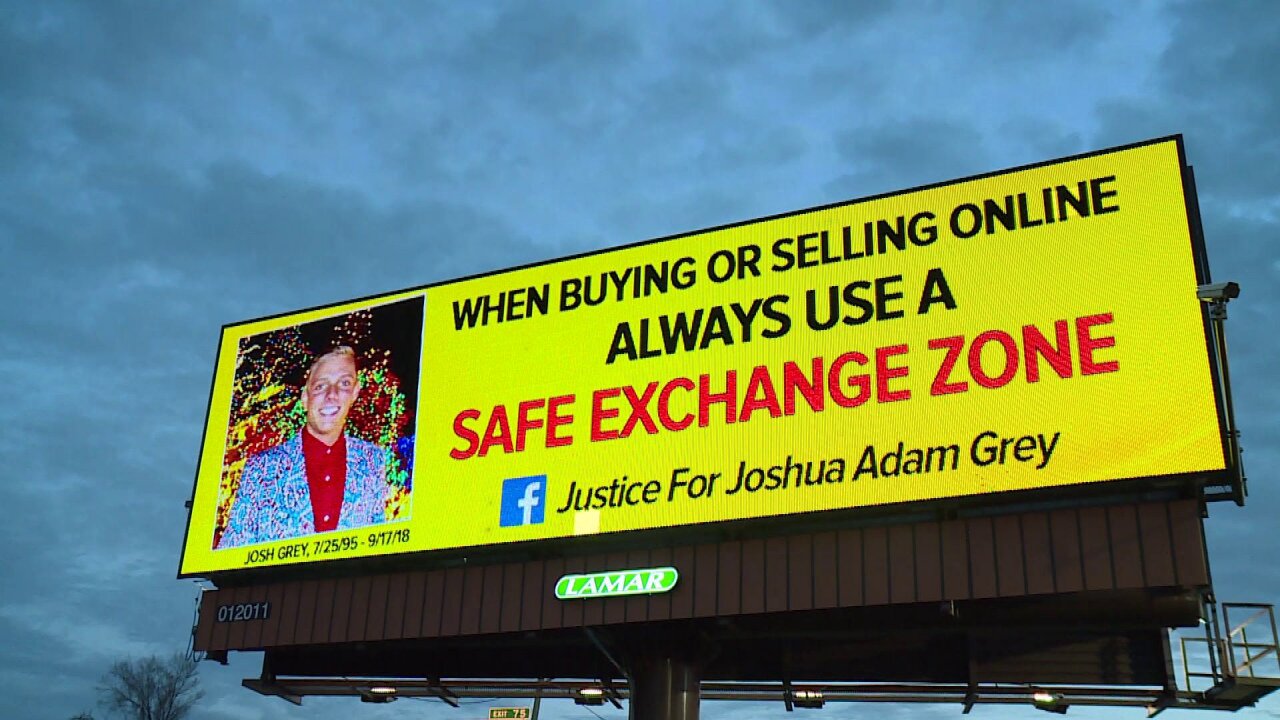 RICHMOND, Va. -- The parents of a man who police say was murdered while trying to sell his phone are attempting to save lives one billboard at a time.

“I want to save another family from traveling down this road that we didn’t ask to be on,” said Diane Grey.

Diane and Mike Grey are raising awareness about “safe exchange zones” after losing their eldest son during an online sale.

Police say 23 year old Josh Grey was fatally shot September 17, 2018 after arranging the sale of his phone on the app “letgo," an app that enables you buy and sell items to people in your area.

“The iPhone apparently was taken Josh put his hands out took one step forward like what the heck what’s going on and at that point the 15 year old turned around and shot Josh once in the chest,” said Josh’s mother Diane.

Investigators said police were called to a convenience store at the intersection of Mechanicsville Turnpike and Carver Street for the report of a person down at 1:36 p.m. that September afternoon.

“There was blood everywhere Josh was just grasping for anything and as soon as he walked in he collapsed on the floor and died at the scene from one gunshot wound to the chest,” said Diane. “It’s so senseless.”

When police arrived, they found Grey, of the 7200 block of Riverside Drive, in the store unresponsive. He had suffered an apparent gunshot wound and was pronounced dead at the scene.

Tyshawn T. Andrews, 15, of the 1300 block of Coalter Street and Demeco T. Pressey-Robertson, 17, of the 2400 block of North 23rd Street were arrested in the murder of Grey. Police have surveillance video of the crime.

Grey was shot and killed the same day a tornado outbreak spread across Central Virginia. His parents were frantically trying to reach him to check on him but instead of hearing back from Josh they received a call from a detective.

“’Mr. Grey, I need to talk with you about your son Josh,’” explained Josh’s father Mike Grey. “I immediately thought Josh had been in an accident or he had done something stupid. I told the officer to let me get his mom on the phone. Once Diane was on the phone, the officer said ‘I am sorry to have to tell you this over the phone but your son Josh was shot and killed today,’" Mike said.

“A feeling of complete emptiness filled my body, I felt sick. It was like all the air had been taken from me,” he added.

“I screamed, I fell to my knees sobbing,” said Diane.

“It’s just the most gut wrenching God awful feeling of heaviness that you can withstand,” she added.

Just two miles from where Josh was murdered is the VCU Police station, a “sell safe” location for the public to use around the clock.

“We have a full communications center here so in our vestibule area we have cameras that are centrally located can have a view of that area there’s also an air phone where a person can contact our police dispatcher should they need to report something,” said Lieutenant Dailey. “If someone is not willing to meet you [at a safe selling space] don’t do business with them.”

The Greys say they had not heard of these designated monitored areas prior to their son’s murder.

“I feel certain that Josh didn’t know they were out there just like many people around the United States nationwide don’t know they are available to use for online transactions,” said Diane.

Which inspired the Greys to start a billboard campaign to raise awareness. They financed Josh’s first billboard on Interstate 95 in Richmond.

“I’m proud of it,” said Diane. “To see his smiling face, his grin his blue eyes saying ‘don’t worry mom, I got you. I’m going to help somebody else’ and he’s helping.”

Josh’s awareness billboards are up in six states. Several have been donated to help the family spread the word about “safe exchange zones.”

“If I could make one change for one family that may think about just meeting somebody randomly and I make them think and they go to a safe exchange zone then I’ve done something in Josh’s name,” said Diane.

“My mission is to share Josh’s story coast to coast with as many people as I can. I want his story to be heard nation wide. I want Josh to be the poster child for “safe exchange zones,”” said Mike. “ When people think of “safe exchange zones,” I want them to think of Josh and his story. A story of a young man that was just trying to sell his iPhone and tragically lost his life. I want to help other families from traveling this horrific path that I have be thrust upon, not by my choice,” he added.

“It’s ruined a part of my life,” said Diane. “I will never ever get back in that split second what could have been changed had he used a “safe exchange zone.””

“A lot of people don’t know what locations have these established and they don’t know how to go about finding where those areas are,” said Lieutenant Dailey.

VCU Police established its “sell safe” zone in 2015. Stafford, Spotsylvania and Fredericksburg also joined law enforcement agencies across the country in 2015 when they added "safe exchange zones" to their parking lots.

The Petersburg Sheriff's Office also established a safe exchange zone in the early part of November 2015 with designated areas in their parking lot, located in the rear of their main office, as well as the Sheriff’s Office lobby.

Former Richmond Police Chief Alfred Durham told WTVR CBS 6 in December 2015 that buyers and sellers should come into the lobbies of any of RPD’s precinct headquarters or the main headquarters to conduct their transactions.

The New Kent Sheriff’s Office and the Chesterfield Sheriff's Office created a "safe exchange zone" in 2016.

The Powhatan Sheriff's Office created its "safe exchange zone" in 2017.

The Hanover County Sheriff’s Office says while they don’t have an official “safe exchange zone,” they welcome the public to use their location during business hours, Monday-Friday, 8am-5pm.

A Richmond Sheriff’s Office spokesperson said they are in the process of creating a “safe exchange zone.”

Henrico police say they do not have a "safe exchange zone."

“I think we need to work with the apps themselves to see if possibly we can get them to list the locations that are central to the areas where people are trying to meet and I also think areas should advertise more that it’s available,” said Lieutenant Dailey.

The Grey’s are also calling on buying and selling companies to assist in their efforts to make sales safer.

“In the future, I would like to see some form of universal database where anyone can go to find a “safe exchange zones” in their area,” said Mike. “Currently, you can go on Facebook, Craigslist, letgo, etc. and find people in specific cities, selling specific things. If it is that easy to create a database for people to post items for sale in designated cities, it should be just as easy to post the locations of “safe exchange zones” in those same cities.”

“My ultimate goal is that we can inspire them with this awareness to make it accessible on their apps that somebody with a click of a button pop in a zip code and these safe exchange zones will pop up so it’s right there so people know where to go,” said Diane.

CBS 6 reached out to “letgo.” A spokesperson responded,

“This was an unimaginable tragedy and our thoughts continue to be with Josh’s family. Our team has worked closely with local law enforcement to help with their investigation.
We are exploring a number of ways to support and encourage the use of local safe exchange zones across the country. letgo includes user profiles, ratings and reviews, and other features to help users see who they’re talking to and what others have said about them. We also use a mix of human and artificial intelligence to help moderate our marketplace and we ask our user community to help by flagging anything that raises concerns. Our team is also available to answer questions.”

The family would like to see Josh’s billboard up in all 50 states. If you would like to help the family with their campaign efforts you can message them on Josh’s Facebook page.