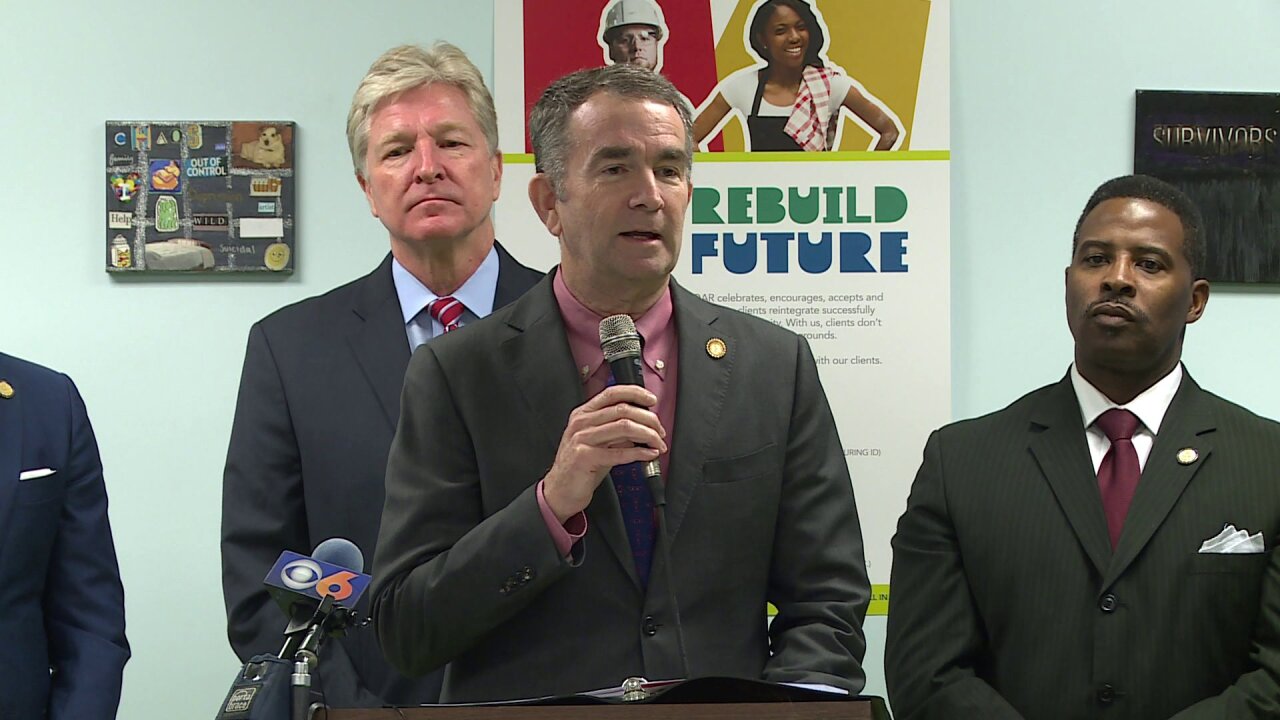 RICHMOND, Va. -- Virginia Gov. Ralph Northam is promising sweeping changes to the state's criminal justice reforms that include decriminalizing marijuana, softening the penalties for people caught stealing smaller-dollar items, and reducing the number of Virginians whose driver's licenses are suspended.

Northam, a Democrat, said at a news conference in Richmond Friday that he's backing an overhaul of the state's criminal justice reform that he said would make it more “equitable" and “compassionate.”

“People will pay a $50 civil fee and we’ll clear the records of people with previous convictions,” Northam said about decriminalizing simple possession of marijuana.

However, Northam stopped short of endorsing full legalization of marijuana.

"When Virginia and when the legislature makes that decision... when that bill gets to my desk, I’ll certainly consider," he added.

Decriminalizing will lead to fewer people in court system and jails. $50 civil fee instead of criminal record.

Northam also proposed raising the threshold of how much someone would need to steal before it’s considered a felony. Currently at $500, Northam says most cellphones cost more than that and would like to change it to $1,000.

The package of bills also includes one that would permanently eliminate the practice of suspending a person’s driver’s license suspensions for unpaid courts costs and fines. Lawmakers voted to do that last year with a budget amendment.

Since that time, Northam said over 60,000 Virginians have had their licenses reinstated.

“I will also propose that we stop suspending driver's licenses for certain non-driving offenses. Such as drug crimes, failure to pay jail fees, or driving away without paying for gas,” added Northam.

The governor also said he supports reforming the Commonwealth's parole system and giving "consideration to individuals based on their age and certain medical conditions." He said this could impact several hundred inmates in Virginia's prisons.

"Although parole was abolished in Virginia in 1995, juries were not instructed of this change until 2000 following a court ruling, that being Fishback versus the Commonwealth," said Northam. "That means it's possible that juries were imposing harsh sentences during those five years under the incorrect belief that the individuals would be eligible for parole and would serve only part of their sentence. Offering those people a pathway to parole will make our system more equitable."

It says in part that Virginia’s system of criminal justice isn’t perfect, but it succeeds in keeping Virginians safe and reforming criminals. He adds any significant changes “should be undertaken carefully with an eye toward unintended consequences.”

"We have the second-lowest crime rate in the nation, and the lowest rate of recidivism,” said Gilbert. “Doubling the amount you can steal from your neighbor without serious consequence is unfortunately a prime example of the Democrats’ looming agenda on crime and criminals.”

“Gov. Northam is placing more criminals on our streets while he makes it harder for law-abiding Virginians to protect themselves and even criminalizes them for exercising a fundamental constitutional right. His revolving door criminal justice system is a risk to everyone,” added NRA spokesperson Catherine Mortensen in response to Northam's announcement.

The 2020 legislative session starts next week.

Democrats are set to have complete control of the state house starting next week for the first time in more than two decades.