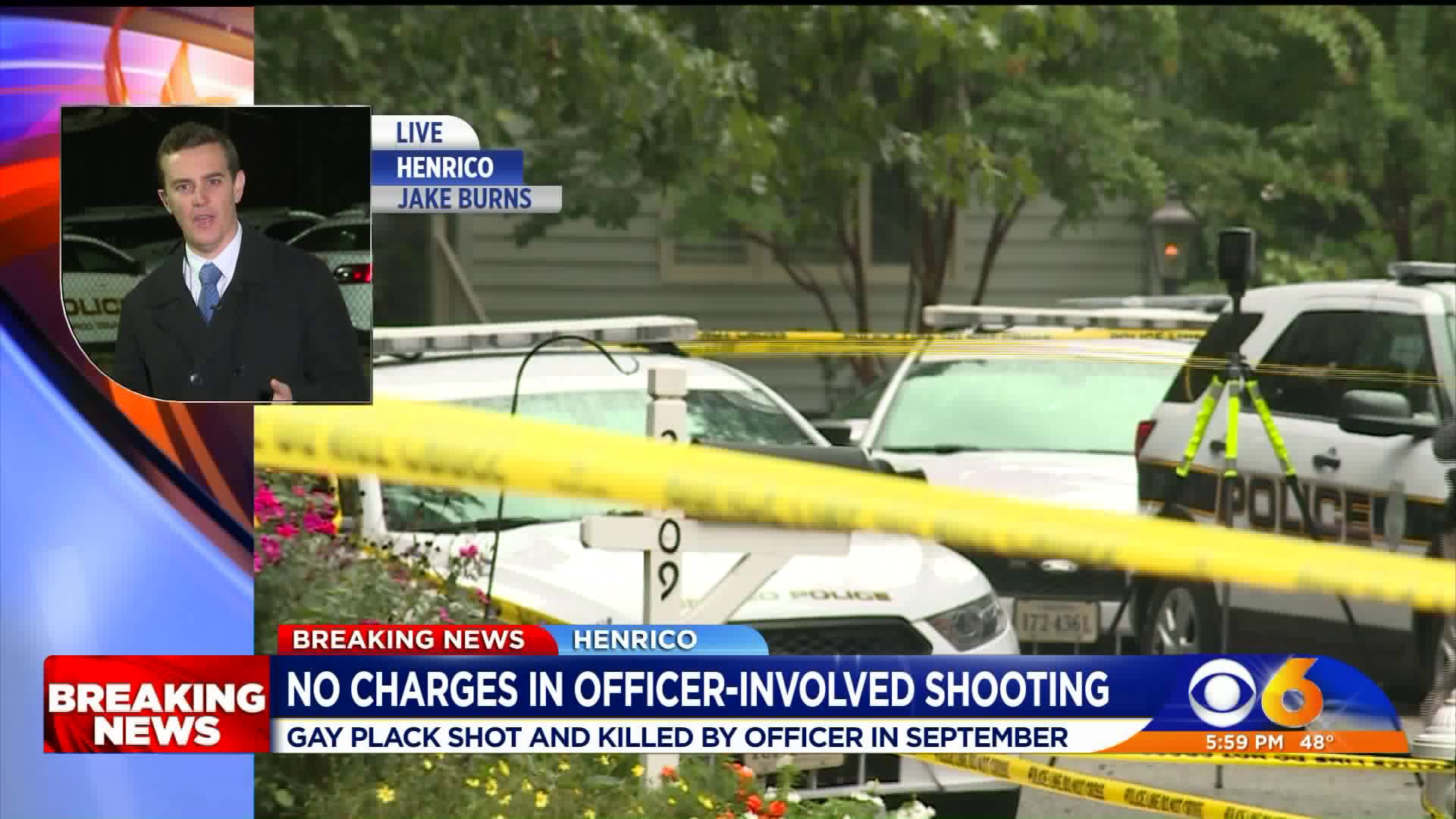 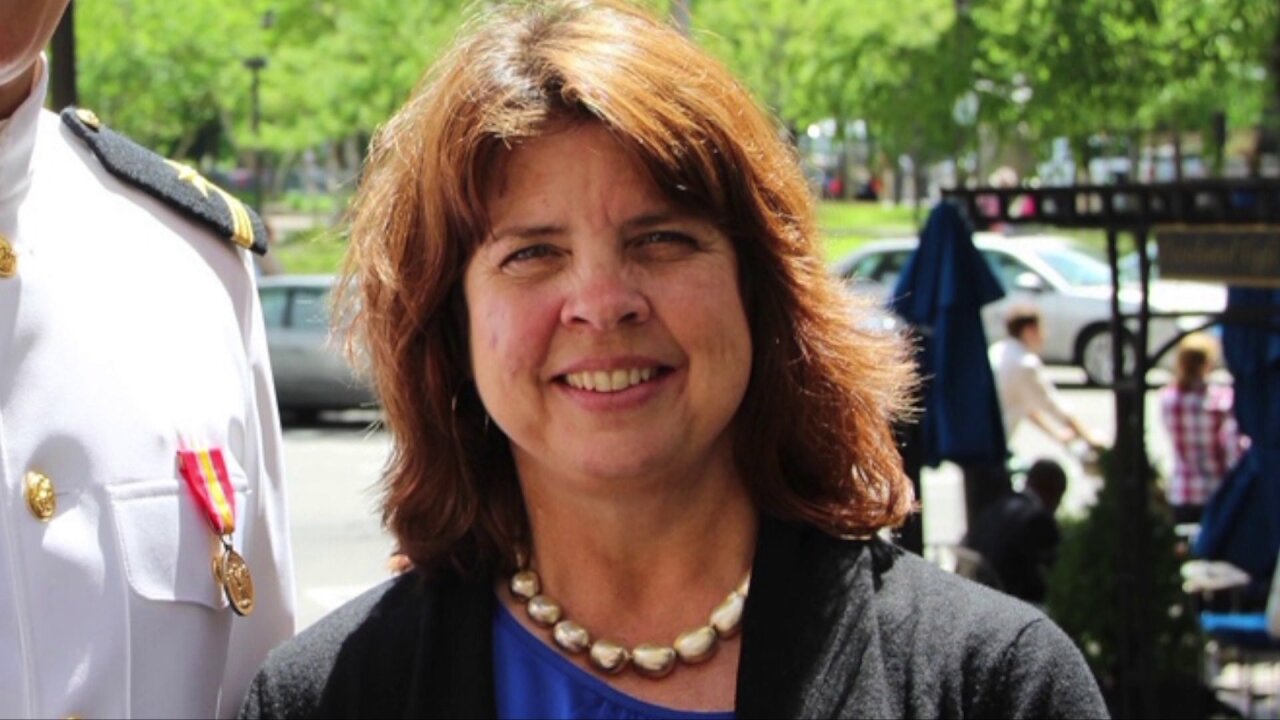 Plack died after she was shot by Henrico Police during a welfare check at her Huntwick Court home in the Wellesely neighborhood in September. Plack's doctor requested police check on his 57-year-old patient at her home.

The former nurse, preschool teacher, and talented artist had long battled bipolar disorder, according to her family.

A week after the shooting, Taylor requested that the Hampton and Stafford Commonwealth’s Attorneys independently review the shootings.

Those reports were released on Monday afternoon.

"All three reports unanimously conclude there is no criminal liability on the part of the officers,” Taylor said in a release Monday.

"While, therefore, no charges will be filed, this was a tragic circumstance and I reiterate my call for a review of mental health policies at every level, to include stakeholders at both the state and local levels, to try and avoid future tragic incidents,” she added.

READ: Results of investigations into fatal shooting of Gay Plack:

Plack’s brother Bob Bostock, who has been outspoken about the shooting, wasn’t aware of Taylor's decision. Bostock said his nephew told him a Henrico Police detective texted him at 4:29 p.m. that there was a decision issued about the investigation.

“I’m not surprised since the Commonwealth’s Attorney announced before she even began the investigation she thought there was no wrongdoing. They had no business going into her house," Bostock said. "On no previous welfare check done for my sister had anyone from law enforcement gone into her house. If they acted with a little more sense instead of breaking down her bedroom door and scaring her half to death, my sister would be alive today."

“I hope the Henrico County Board of Supervisor take a real close look at how these situations are handled, how a welfare check on a person suffering from mental illness is handled. These two officers treated her like she was a criminal and she wasn’t a criminal. She was minding her own business in her own home and she winds up dead.

That’s just wrong and very, very upsetting that apparently these officers will not be held accountable in any way shape or form for the fact they made the incredibly stupid decision to go into her home without cause," he added.

Body-camera video shown to media members showed 57-year-old Gay Plack swinging an ax at two officers before she was fatally shot during a welfare check on September 17.

The footage, which has not been released to the public, was shown to reporters inside the Henrico public safety building on September 20.

Henrico Police responded to the 2900 block of Huntwick Ct. in the Wellesley community for a welfare check called in from Plack's doctor.

The 7-minute long unedited body cam video began with two Henrico Police officers at the rear door of the home. The officers can be seen knocking on the door, but not receiving a response. After finding a door that was unsecured, officers entered the home and identified themselves as Henrico Police and called Plack’s name.

After clearing the kitchen and the second floor of the home, the officers turned their attention to a locked door on the first floor of the home. After looking through an outside window, an officer noted that the room appeared to be a bedroom with the light on.

An officer knocked on the outside window several times.

“Both of those doors are locked so there has to be someone in there,” an officer can be heard saying in the body-cam video.

Police Chief Humberto Cardounel said officers decided to force entry into a locked bedroom to see if anyone was in distress.

Body-cam video shows an officer breach the door by kicking it in. Upon entering the bedroom, one officer entered the bathroom and noted that he saw some blood.

As he pushed back the door, the officer could be seen retreating from the bathroom and a woman confronts the other officer while swinging an ax towards them. One officer can be heard telling the woman to stop several times before she was shot. Four gunshots were heard during the video.

Henrico Police confirm that both officers fired shots at Plack.

The officers were then seen standing over Plack. Cardounel said the officers believed she was only wounded in the hand.

After the shooting, an officer can be heard saying “Ms. Gay. Why would you do that? We’re just trying to help you.”

She was transported to the hospital where she died from a gunshot wound to the abdomen, according to the medical examiner.

Cardounel expressed sympathies for the family, but said he believes his officers had no other option under the circumstances.

“I feel confident in the officer’s actions. What they were confronted with, left our officers no other option,” Cardounel said.