32 Great Danes seized from ‘squalor’ to be forfeited by owners 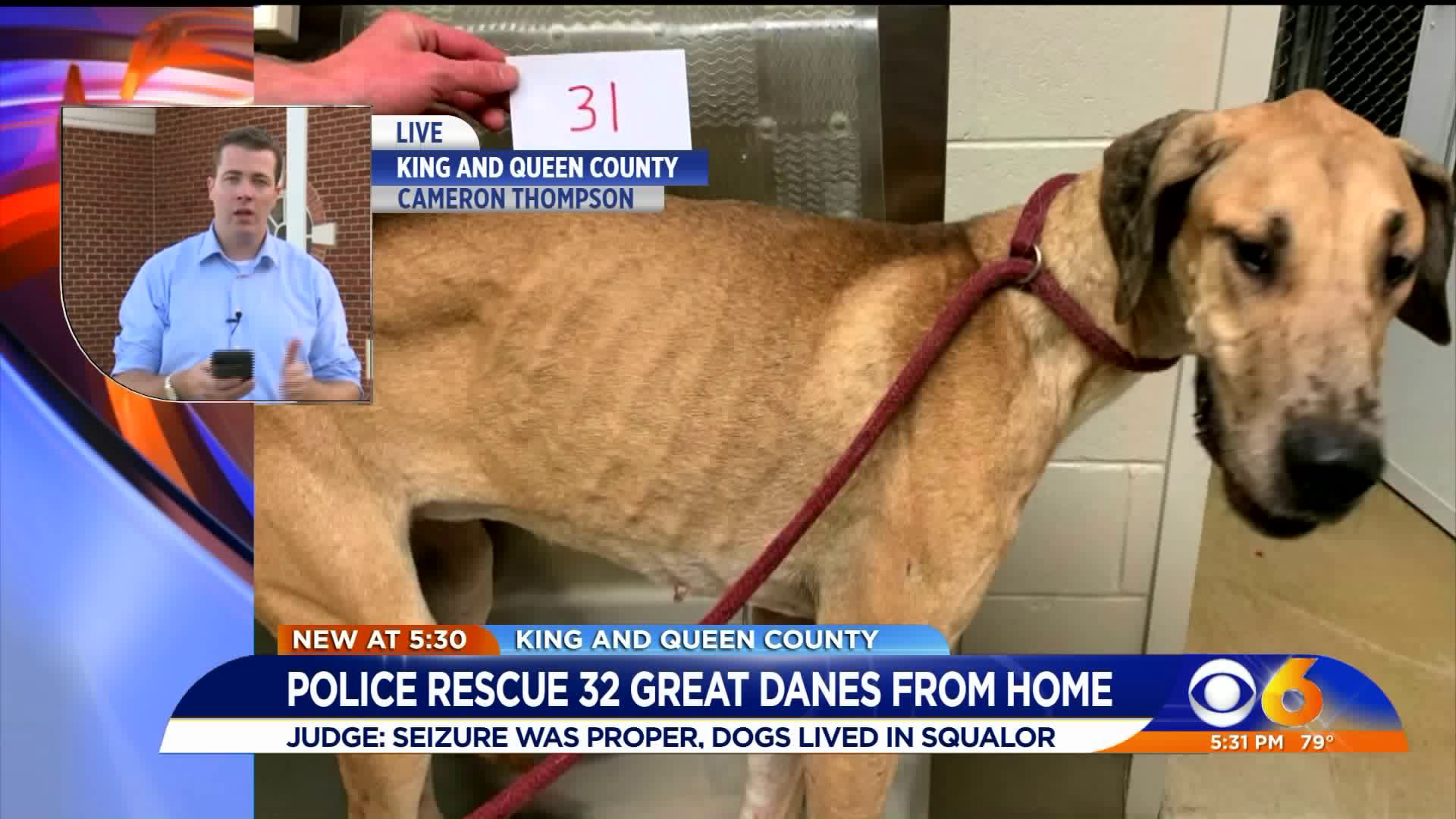 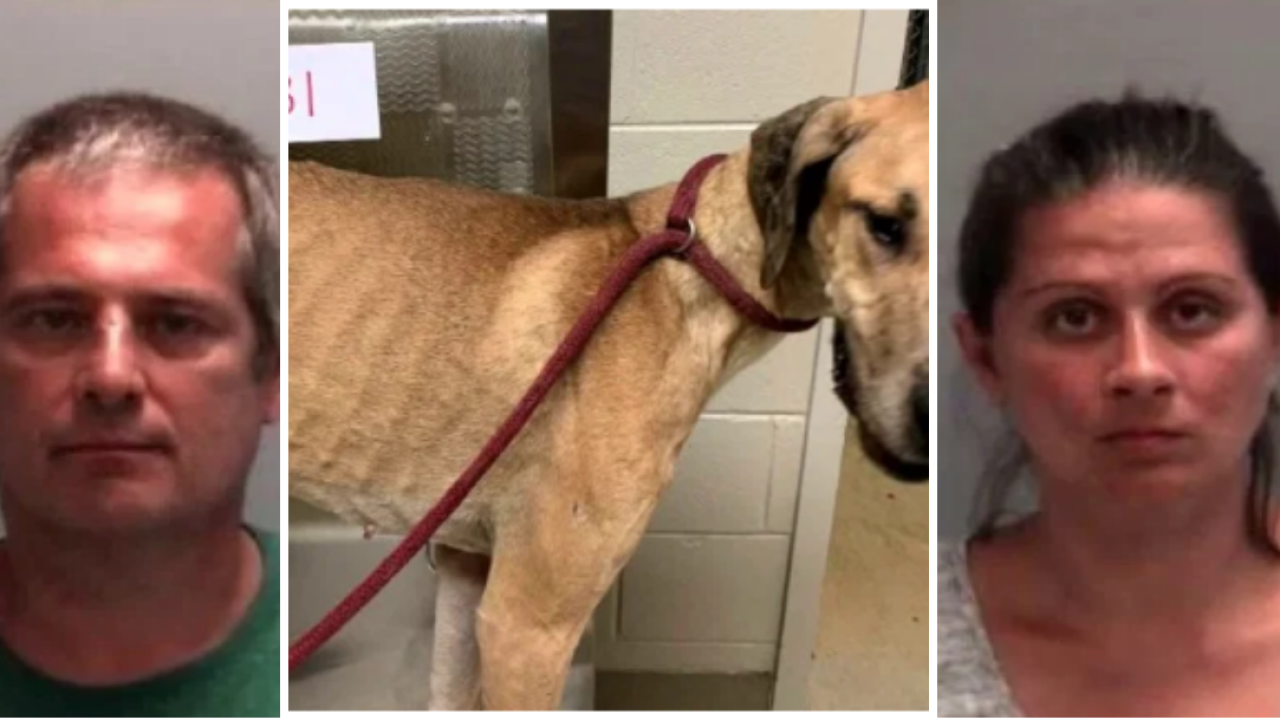 KING AND QUEEN COUNTY, Va. -- A King and Queen County District Court judge ruled on Friday that the seizure of 32 Great Danes, including 12 puppies, from a St. Stephens Church couple in August was proper, ruling he determined they were denied adequate care and shelter. The judge said the word that came to mind to describe the conditions that dogs were kept in was “squalor”.

The dogs were ordered to be handed over to the control of the Regional Animal Shelter in King William County where they have been cared for since being seized.

The judge also ordered the couple pay over $8,300 in restitution for the costs incurred by the county to care for the dogs since they had been seized and barred them from owning any companion animals. "living in squalor" must pay $8,300 in restitution and have been barred from owning any companion animals, a judge ruled on Friday.

Earlier this month, the King and Queen County Sheriff’s Office (KQCSO) announced that back on August 27, deputies had arrested and charged Richard Awlasewicz, 52, and Candice Wheat, 39, with animal cruelty after 32 Great Danes were discovered in "poor to near-death condition" in the couple's St. Stephens Church home.

Friday’s hearing was to determine whether the dogs would be returned to the owners or if they would be handed over to the county. The couple still faces criminal charges and a preliminary hearing for that case is set for November 1.

In court, witnesses for the Commonwealth’s Attorney, Charles Atkins, testified to the conditions of the home where the dogs were kept.

KQCSO Deputy Brian Burr, who executed the search warrant on the home said that there were piles of feces inside the home. He added that in a camper where they found five of the adult dogs, the floor was rotting, there was no water, the door to the camper had been propped shut and the vehicle was poorly ventilated.

Kathleen Slayman, a veterinarian who examined the dogs two days after they were seized testified that the majority of the dogs were emaciated, while all of them suffered from hookworms, while others also suffered from other varieties of worms. She also listed a list of ailments that some of the dogs suffered from including swelling in the paws and skin infections.

Slayman testified that in the weeks since they had been cared for at the shelter, the dogs had gained weight and been mostly cured of their ailments.

In court, another witness Lauri Betts, the manager of the shelter where the dogs have been cared for, listed off the weights of most of the dogs when they came in and their body condition score.

The manager testified that the body condition score is a recognized ranking system. She said that dogs would ideally score between four and five, while one to three is considered thin. Only three of the 20 dogs mentioned in court scored a four, while the rest were three or lower, including a dog that scored negative one.

These are my notes of the dogs they discussed in court regarding their weights & body scores when they came in on August 27 and their weights and scores as of Sept 17.

The shelter manager testified that the body score system goes from 1-9. 4-5 is ideal, while 1-3 is thin. pic.twitter.com/xdKWX7ptF1

After the judge’s ruling, the couple indicated they would not challenge the ruling on 30 of dogs, but wanted to appeal the ruling on dogs #17 and #22, which the couple said were service animals.

The judge told them it was an all or nothing deal and the prosecutor raised concerns about the costs of looking after all 32 of the dogs until the appeal could be heard. Atkins said the appeal likely would not be heard until after the criminal case was finished, which he said could be sometime after January 2020.
An agreement was then reached between the defense and prosecution that the couple would sign over ownership of the 30 dogs, then appeal the ruling for the two remaining dogs.

After the hearing, KQCSO John Charboneau thanked everyone who offered donations to help take care of the dogs calling the response overwhelming.
"We actually had to set up another website up because it was loaded, our site and our phones. We couldn’t get any messages out. It was remarkable the outside contacts from out of state and everywhere else in the United States. They had called across the country,” said Charboneau.

Charboneau added that the shelter already had adoptions lined up for all 30 of the dogs who were being signed over. He said the dogs will be sent to an undisclosed rescue shelter for further rehabilitation and when each dog was ready, they would be released to their new forever home.