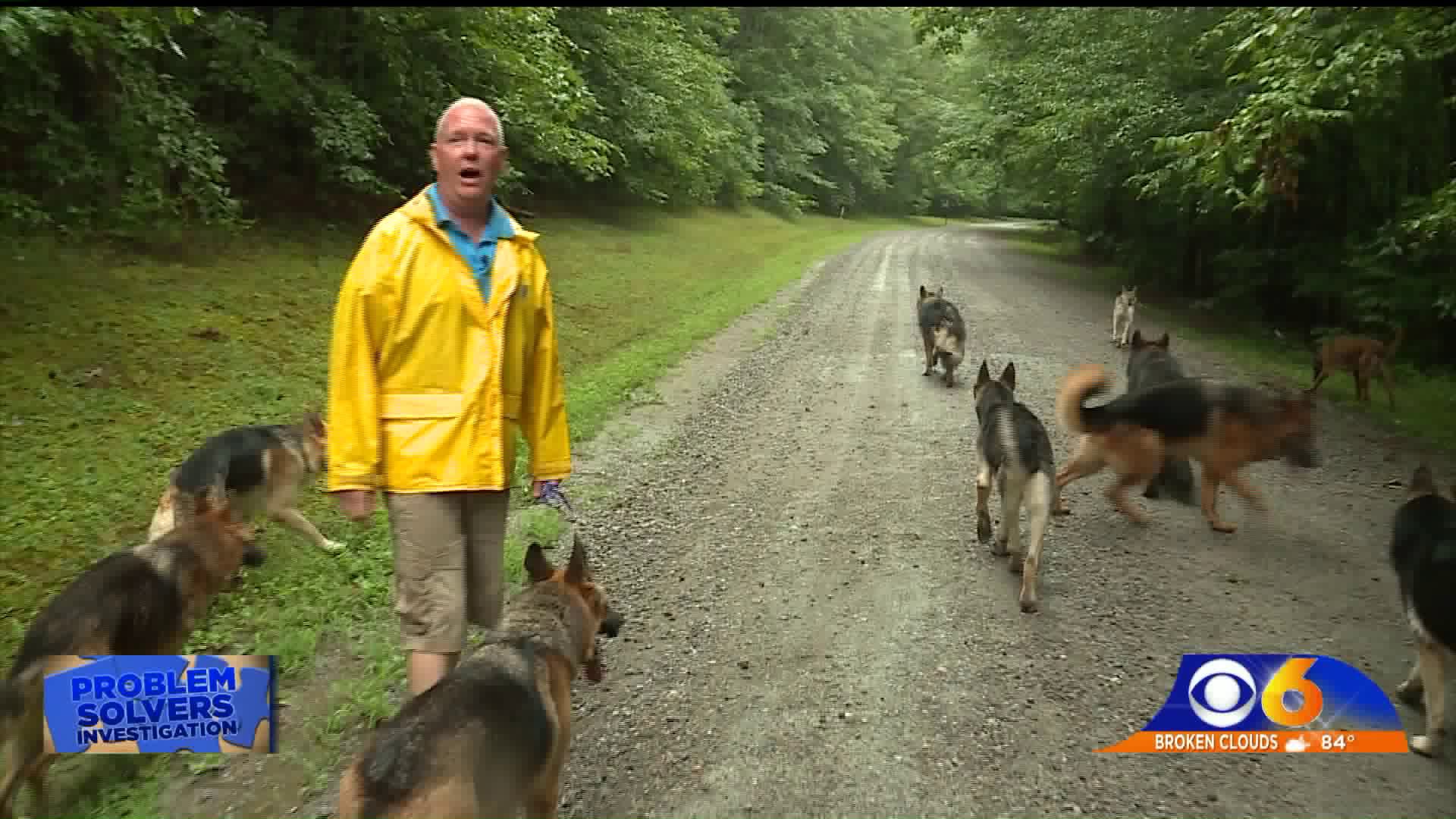 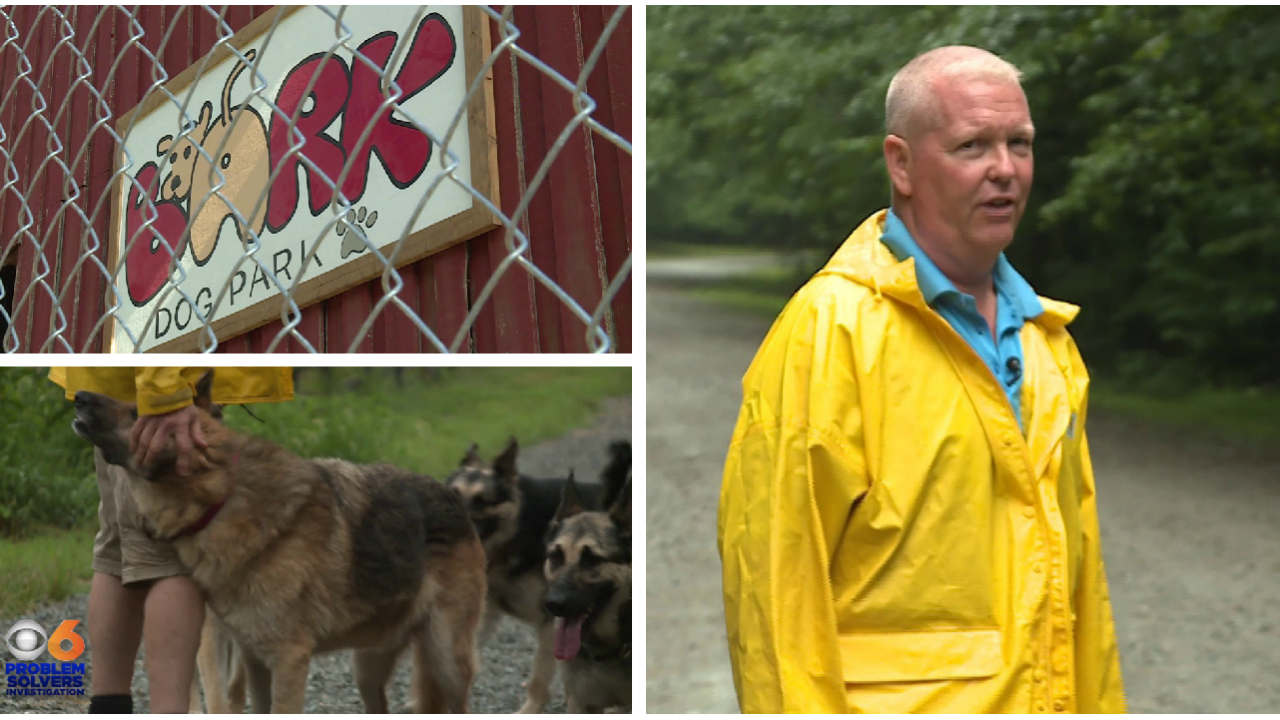 HANOVER COUNTY, Va. -- As he's done twice daily for the past 20 years, Bob Tillack takes rescue dogs for a walk on his 100-acre property in Hanover County.

Since 2005, the land has been the home of BARK, which stands for "Bandit's Adoption and Rescue of K9s."

Bandit is the name of one of the first dogs Bob ever saved.

"Those are my two personal dogs. Everybody else is in various stages of looking for a home," Tillack said while taking CBS 6 reporter Melissa Hipolit on a walk with more than a dozen German Sheppards.

BARK's mission statement is to rescue abandoned pets and other adoptable dogs from animal shelters and find them loving forever homes.

Tillack said they've had thousands of success stories and BARK's good reputation led to a partnership with the Virginia Department of Corrections for a program that teaches inmates how to train the dogs and prepare them for adoption.

BARK has even received national attention by appearing on Animal Planet back in 2016 after winning a $180,000 kennel renovation contest.

So, it came as a shock to many volunteers, when Tillack announced in early June that he would be shutting the organization down before the end of the year.

On BARK's website, you will find details about the dozens of dogs who need to be adopted before December.

But you'll also find several postings that are extremely critical of the way Tillack has run things.

That's because the official BARK Facebook page is actually run by volunteers like Ann Hall and her brother Bill Riester.

"It's a very contentious environment to go out there but I continue to go for the dogs," Hall said.

They claim mismanagement over the past couple of years has been detrimental to the welfare of the dogs and has kept many of them from getting adopted.

"We have dogs that have been there, I mean one of them has been there two and a half years, went to the SPCA and was adopted within a week," Hall said.

And, they said some of the dogs have had to go through the prison program numerous times.

"We have a dog there, that's on its third stint in the prison program. Third.  It just came back in May, it's an elderly beagle, very adoptable, has been at BARK probably 18-19 months," Hall said.

Hall and Riester said they finally became fed up earlier this month when they showed up to volunteer and noticed wounds on one of the dogs.

"There were huge wounds, and this dog is taken out by Bob and his pack of shepherds, and he clearly gets beaten up, and nothing is done about it," Hall said.

They said they called Hanover Animal Control, but when officers showed up, they were the ones who had to leave.

“We were asked to be removed from the property, so it's a clear example of retaliation because we spoke up. Every time we speak up this is what happens, volunteers are retaliated against," Hall said.

"They claim they were forced off the property by you?" Melissa Hipolit asked Tillack.

"Well, there ya go, facts sometimes have a way of, reality has a way of being a little different," Tillack responded.

The Chief of Hanover County Animal Control, Jeffrey Parker, confirmed that they received a complaint about an animal not being cared for with some open wounds.

Parker said they spoke with the owner and asked him to take the animal to the vet.

He said the case is ongoing and his office will present evidence to the Commonwealth's Attorney for review. He said animal control did not escort anyone off the property, but the Hanover Sheriff's Office asked a couple of volunteers to leave per the request of the owner of the property.

CBS 6 asked Tillack about the allegations that not enough is being done to get dogs adopted in a timely fashion.

"Is it true when these volunteers say it takes 10 months on average?" Hipolit asked Tillack.

"After that event that occurred down there at Virginia Beach, we had already started cutting back, so my intention was to put all the animals through the prison program we have some baseline behavioral data on all these dogs, even the smallest little dog can have some quirks that can bite," Tillack replied.

Tillack is referring to an incident in Virginia Beach in June of 2017 where a pit bull adopted from a rescue group killed a 90-year-old woman.

"My worst fear in all the time I've been doing this is that we put an animal in a home that injures someone. That isn't what we're about," Tillack said.

CBS 6 also wanted to know if it's a red flag that some dogs have had to go through the prison program multiple times.

"The only thing that happens bad in the prisons is they get fat," Tillack said. "It's a great program, it's good for the dogs and good for the people."

But, some of the people who used to look up to Tillack said there is not a lot of good happening at BARK right now. They said the organization is overwhelmed and under-resourced, and they are worried about the future of the dogs.

The siblings also suggested that BARK has not submitted tax returns to the IRS since 2015.

CBS 6 went on the GuideStar website, which gathers information about U.S. nonprofits, including tax returns, and found their last 990 form on the site is from 2015.

He said he forwarded her contact information to BARK's treasurer, but she has not heard from them.

CBS 6 checked with the Richmond SPCA and the Fredericksburg SPCA to see how long it typically takes them to find homes for their dogs.

Both said, on average, adoptions happen in fewer than three weeks.

Chief Parker said despite the recent investigation into one dog's wounds and the volunteer’s concerns, they have been out their regularly and found "everything is adequate by law."