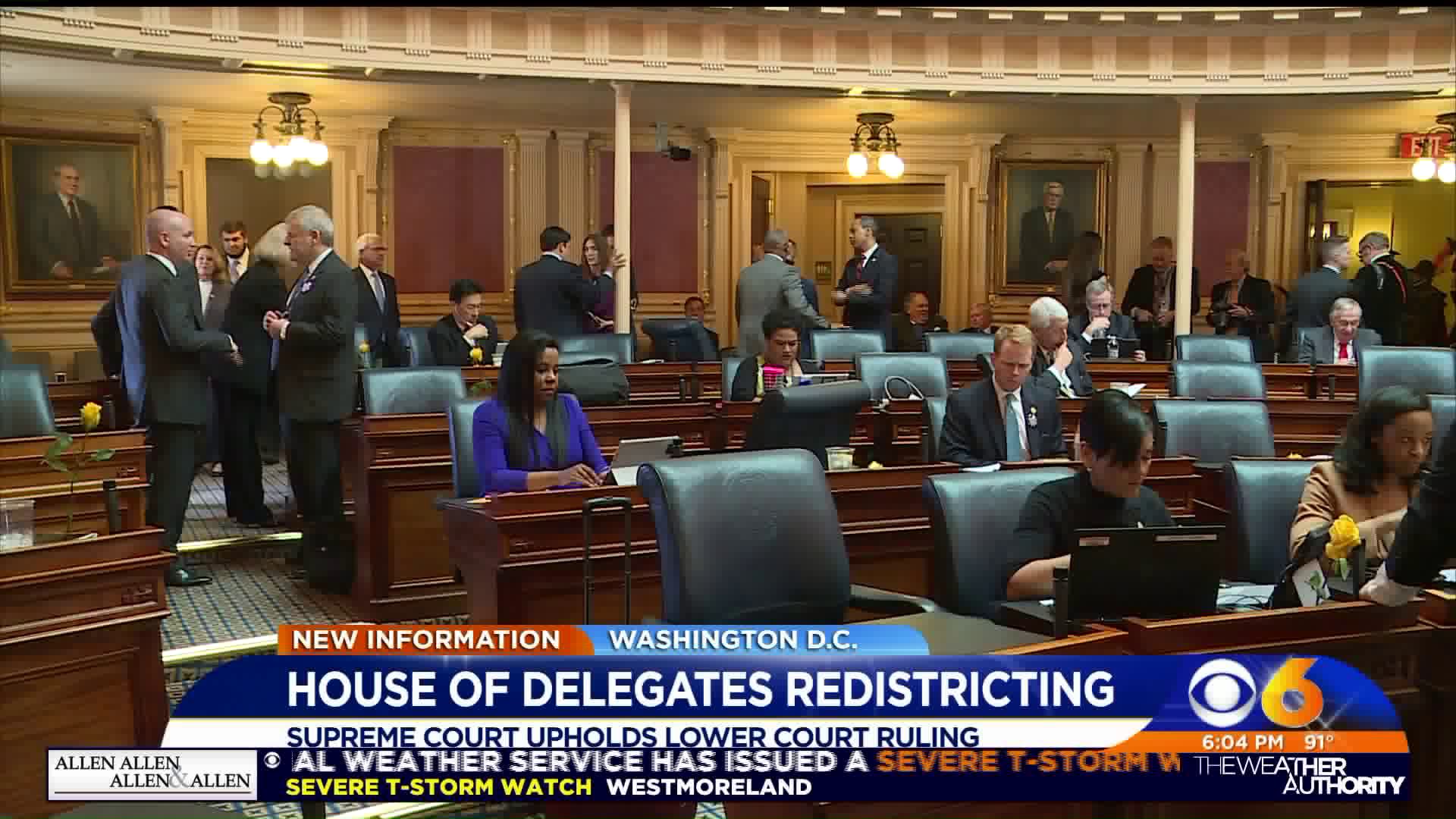 WASHINGTON -- In a split opinion, the Supreme Court of the United States (SCOTUS) ruled Virginia's House of Delegates does not have standing to challenge a lower court finding that Virginia's House map was racially gerrymandered. With the decision, court-drawn House maps, which were ordered in 2018, are upheld, and make it harder for Republicans to defend their majority in the House during November elections, according to analysis by the Virginia Public Access Project.

The Justices were split on their opinion, with five signing onto the majority opinion and four dissenting.

Justices Ginsberg, Thomas, Sotomayor, Kagan, and Gorsuch were in the majority, while Justices Alito, Roberts, Breyer, and Kavanaugh dissented.

After years of legal challenges surrounding the House map, Virginia Attorney General Mark Herring, a Democrat, chose to not pursue the appeal on the behalf of the Commonwealth.  Republican leaders intervened in the case and asked SCOTUS to vacate the lower court's ruling that 11 House districts were racially gerrymandered in 2011, when they were initially drawn.

In writing the majority opinion, Justice Ginsberg said the House does not have standing to appeal since they do not represent the interests of the state as a whole.

"The House, we hold, lacks authority to displace Virginia’s Attorney General as representative of the State. We further hold that the House, as a single chamber of a bicameral legislature, has no standing to appeal the invalidation of the redistricting plan separately from the State of which it is a part," Ginsberg writes.

The majority writes that the House did not show that their members suffered injury by the redrawing of the maps since voters chose their representatives.

"Instead, it is a representative body composed of members chosen by the people. Changes to its membership brought about by the voting public thus inflict no cognizable injury on the House," the majority opinion states.

“In short, the State of Virginia would rather stop than fight on. One House of its bicameral legislature cannot alone continue the litigation against the will of its partners in the legislative process," Ginsburg writes.

The four dissenting justices disagreed that House members were harmed by the court-ordered maps.  Writing the dissent, Justice Alito said the court-drawn map "will harm the House in a very fundamental way."

"When the boundaries of a district are changed, the constituents and communities of interest present within the district are altered, and this is likely to change the way in which the district’s representative does his or her work. And while every individual voter will end up being represented by a legislator no matter which districting plan is ultimately used, it matters a lot how  voters with shared interests and views are concentrated or split up" Alito writes.

"To suggest otherwise, to argue that substituting one plan for another has no effect on the work or output of the legislative body whose districts are changed, would really be quite astounding," the dissent continues.

"This is a big win for democracy in Virginia. It’s unfortunate that House Republicans wasted millions of taxpayer dollars and months of litigation in a futile effort to protect racially gerrymandered districts, but the good news is that this fall’s elections will take place in constitutionally drawn districts," Herring said.

"When we corrected racially gerrymandered districts earlier this year, we righted a wrong—as I have always said, voters should choose their representatives, not the other way around. I am pleased that this fall, every Virginian, no matter who they are or where they live, will cast their ballots in fair and constitutional districts," said Governor Ralph Northam (D).

Speaker of the House Kirk Cox (R-Colonial Heights) said his caucus is disappointed by the SCOTUS opinion.

“The Court’s opinion today ends a disappointing saga of orchestrated attacks against the constitutionally-enacted redistricting plan. A shadowy organization funded by out-of-state interests has cost the taxpayers millions to overturn a legislative map that passed in 2011 that passed with an overwhelming majority," Cox said.  “Unfortunately, the Court’s decision to not decide the merits of this case leaves a number of unanswered questions just two years before the next redistricting cycle. This could have been prevented if Attorney General Herring would have defended the law of the Commonwealth and allowed the Court to provide an opinion on the merits of this case."

Since SCOTUS ruled that the House does not have standing to appeal, they did not rule whether the lower court erred in ruling the 11 districts unconstitutional.  House Republicans were asking SCOTUS to vacate the order.

With Republicans holding only a slim majority in the House of Delegates, both parties have a major interest in the Justices’ decision. The party in power in 2021 will control the redistricting process for the House, Senate, and Congressional districts.

The court drawn plan that stays in place "make it more difficult this November for House Republicans to defend their current 51-48 majority," according to an analysis by VPAP.