All Richmond courts fail Homeland Security review: ‘Enter at your own risk!’ 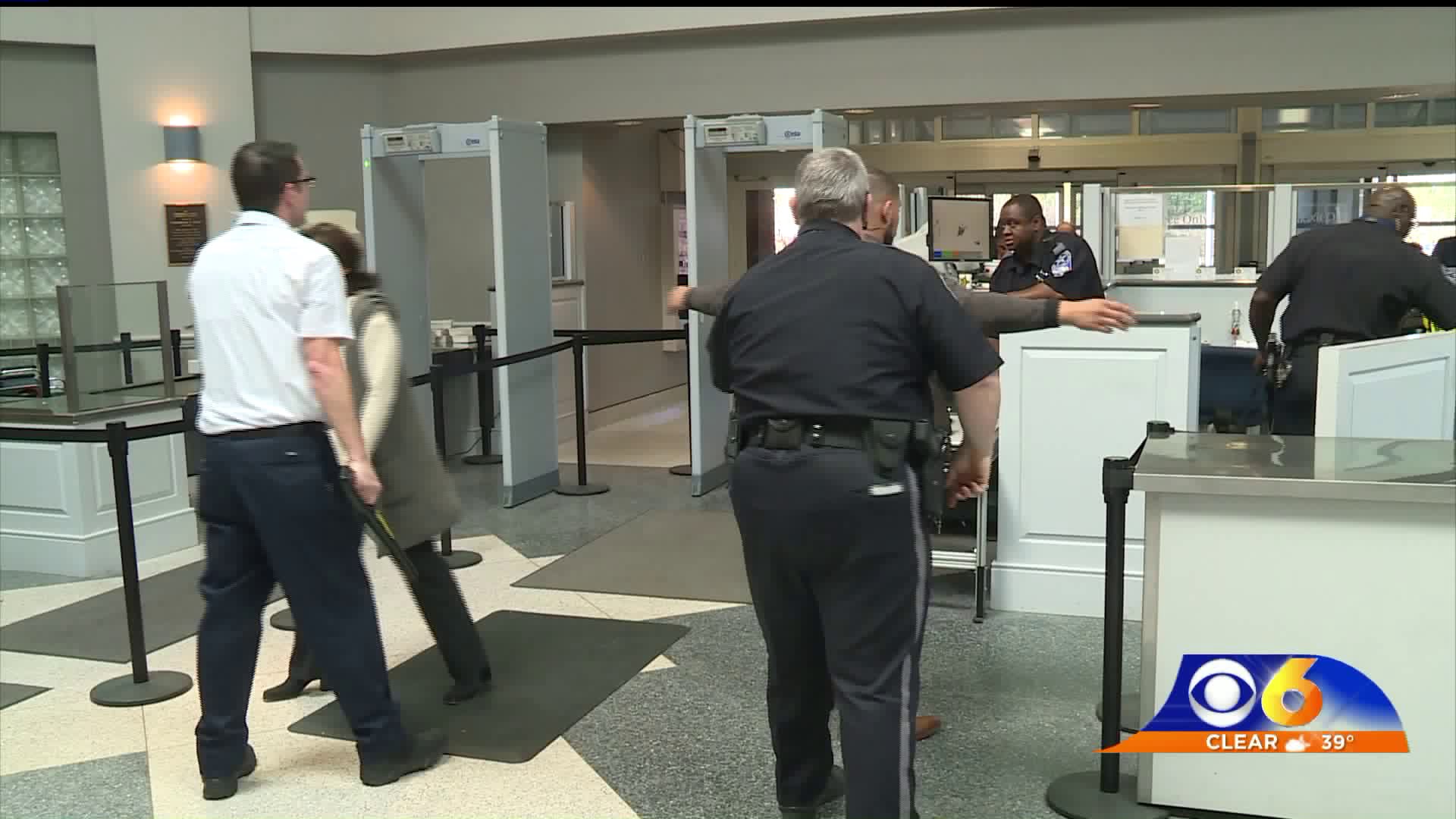 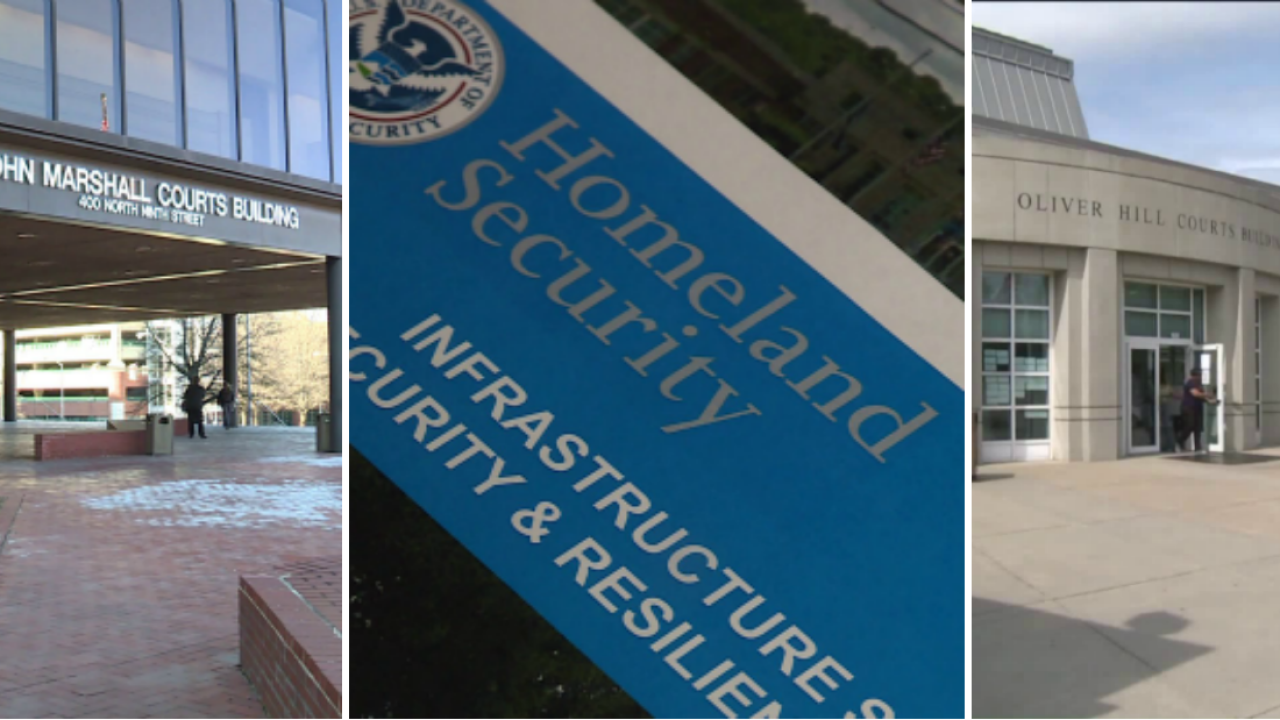 RICHMOND, Va. -- A former Richmond Sheriff said it’s only a matter of time before something tragic happens at a court building in the City of Richmond.

"It's a huge responsibility and it's very stressful knowing that you are responsible for whatever gets through there,” former Richmond Sheriff C.T. Woody said.

Woody had that responsibility for 12 years as Richmond sheriff. It's a responsibility he said concerned him when he took office in 2006 until his last day in 2018.

“There are some really serious safety issues,” Woody conceded.

A confidential DHS report, obtained by CBS 6, on the John Marshall, Oliver Hill and Marsh-Manchester court buildings laid out the risk assessments, Sheriff Woody requested in 2016 after a conducting a concerning internal security review.

DHS uses a voluntary web-based security survey known as an Infrastructure Survey tool to identify and document overall security and resilience of critical facilities across the country.

According to DHS, the security survey is conducted to:

Woody said proof of that played out October 3, 2018, when sources say Jarrell L. Young entered the John Marshall Courthouse armed with a gun.

Investigators say Young shot himself outside the courthouse and died by suicide.  The Sheriff’s Office says there is no evidence they have found that Young entered the building before shooting himself.

“They don't have any alerts outside that would alert something on the inside if somebody is coming up the steps with a gun," Woody said.

Electronic Security Systems were one of 27 vulnerabilities DHS listed in its report of John Marshall, the building that ranked the lowest of the three city court buildings.

Marsh-Manchester had 25 and Oliver Hill had 11 vulnerabilities.

“Poor camera system technology, the way the doors were designed with people coming in, the judges should have a secret entry private parking space where they wouldn’t be visibly seen,” Woody listed as some of the problems.

When it came to physical security, under normal courthouse operations, city court buildings ranked above the national average. The report commended the facilities’ proactive security management team. Oliver Hill was also commended for using ballistic glass on the ground-floor windows.

The overall PMI for John Marshall was 55, above the national average of 47 when compared to 80 other assessed judicial chambers or offices. It ranked highest in its security force and lowest in security activity history/background.

The PMI for Oliver Hill was 60, above the national average of 48 when compared to 81 other assessed judicial chambers or offices. It ranked the highest in its security force profile and lowest in information sharing and security activity background.

The PMI for Marsh-Manchester was 58 above the national average of 48 when compared to 83 other assessed judicial chambers or offices. It ranked the highest in its security force profile and lowest in security activity background.

City courts buildings were all below the failing national average when it came to RMI.

The RMI for John Marshall was 19, below the national average of 31 when compared to 64 other assessed judicial chambers or offices. It ranked highest in recovery mechanisms and lowest in preparedness.

The RMI for Oliver Hill was 30 below the national average of 33 when compared to 75 other assessed judicial chambers or offices. It ranked highest in response capabilities and lowest in mitigation measures.

The RMI for Marsh-Manchester was 28 below the average of 33 when compared to 77 other assessed judicial chambers or offices. It ranked highest in response capabilities and lowest in mitigation measures.

“Enter at your own risk!” retired U.S. Secret Service agent Cheryl Tyler said. “Those courthouses would be top priority for me because it’s impacting too many people.”

CBS 6 traveled to Washington D.C. with the assessments and met with retired U.S. Secret Service agent Cheryl Tyler who is an expert in this field.

The majority of problems CBS 6 will not disclose for public safety reasons. But some are visible the moment you walk into the buildings.

“What I see in the building’s lobby area is just an open space, there’s no guidance there’s no visual guidance to tell people how to flow properly you just all pile in,” said Tyler. “I could just jump over the rope and stand and what are you going to do? Everybody is gone chasing after me and that could be a rouse and somebody else could really be there to do the attack.”

“You have people going out and people coming in at the same time and you have two deputies watching them and you have a metal detector there and that's it,” said Woody.

In Chesterfield County experts say you are stopped the moment you walk into the courthouses by six to eight deputies and civilian security specialists.

“It’s all about layered security,” Chesterfield Sheriff’s Office Lt. Matt Wilkerson said. “As you walk in, you’re met with a magnetometer and a medal detector along with a deputy and civilian security specialist. You have a deputy in the overwatch.”

Wilkerson said cameras help them keep constant monitoring from the inside out.

“We have well over 100 cameras. We do mobile patrols out there every hour,” said Wilkerson.

CBS 6 was taken on the same tour of Chesterfield court buildings that the Department of Homeland Security took several Richmond city leaders on March 16, 2017.

The goal, according to internal communications CBS 6 has obtained, was to demonstrate best practices when it comes to securing court buildings.

“It wasn't a priority I would say because if it were a priority they would have done something about it,” said Woody. “The recommendations have been carried all the way, I know City Hall is very familiar with it and some of the council people are very familiar with it, but nobody really brought it to the forefront they kept saying we're going to do this just hold on we’re going to get this done we’re going to start this start that and it went nowhere.”

“So you're telling me not one recommendation has been taken from this report?” asked CBS 6 Problem Solver Laura French.

“From the time that report was made to the time I left, not one thing has been done to to any of them to rectify the safety issues that Homeland Security said,” answered Woody.

“If you don’t take the time and effort to actually become more proactive you are liable to all the citizens who have put you in those positions that they trust you to ensure their safety you have now become liable for their safety,” said Tyler. “How can you stand before your constituents and say you care and are taking care of them when one of the most important buildings in your city hasn’t had an update?”

All three courthouses are included in the city’s Capital Improvement Program for FY 2019-2023.

“Court building CIP projects are still being developed for scope and cost, so an exact percentage cannot be provided at this time, but it is expected security-related improvements will account for more than 50 percent of the courts’ CIP budget for FY 2019–2023,” Stoney spokesperson Tom Byrnes said.

The city acknowledged in the CIP that “recent CIP requests have proactively attempted to address (1) an insufficient and outdated security system, and (2) significant courthouse security concerns as supported by documentation by independent consultants and security assessments.”

An admission, Tyler and Woody said should have led to immediate action.

“If you’ve admitted online and spent taxpayers dollars to hire consultants to come in and tell you what’s wrong and have representatives from DHS be a part of those analyses, you’ve wasted my money you’ve wasted my time and you’ve insulted my intelligence,” said Tyler. “You can’t wait every time for an incident to happen to make your move... we don’t live in a society like that anymore, you need to be more proactive. You have an obligation and responsibility to ensure the safety and security for any and everyone that comes into that building.”

“Eventually, something tragic is going to happen and then they are going to come in and do what they should've done eight years ago,” said Woody. “This is an emergent situation it should have been corrected, but it’s time to start and the time is now!”

“The city is responsible, it's a city building it's their liability and most the time serious things happen when we are not proactive we’re reactive,” Woody added.

City courthouses fall under the Department of Public Works. According to internal communications CBS 6 obtained DPW officials were actively involved in discussions with DHS advisors during and after the assessments were conducted.

The mayor’s office said they could not comment on courts security improvements stating that the information was classified but says projects are ongoing.

None of the judges asked to comment on the story responded to CBS 6's requests. Woody said all the judge read the security reports and were concerned when briefed in 2017.

“They felt unsafe, they felt insecure as far as their safety, not afraid, but upset because they knew that the city could do better than they were supposed to do in reference of taking care of the major issues,” said Woody.

"I acknowledge some of the findings and share in the concerns of many in the courthouse. I am not in the position to comment further,” Richmond Commonwealth’s Attorney Mike Herring said.

“Our role at the Richmond City Sheriff’s Office is to secure the courthouses in our jurisdiction by patrolling the grounds and the interior of all three courthouses as well as screening those individuals entering the court buildings for the prohibited items,” said Richmond Sheriff Antoinette Irving. “We take pride in ensuring that our deputies are well-trained to ensure orderly conduct and a safe environment for all those working within, entering or conducting business at the court to the best of the resources that we have available to us.”

CBS 6 also reached out to all Richmond City Council members about the assessments. Only Councilwoman Kim Gray and Councilwoman Reva Trammell responded.

“It is deeply troubling that the City has acknowledged the shortcomings of the security systems in each of the courthouses in Richmond’s John Marshall Courts Building, yet has done little to mitigate the vulnerabilities described in significant detail in the Department of Homeland Security investigative assessment published three years ago," Gray said. "Of particular concern are the lack of a written emergency operation/emergency action plan and the lack of an incident management and command center. Likewise, the entry and exit controls are inadequate, creating opportunities for unscreened individuals to enter the building. I am going to work with colleagues on Council to prioritize these shortcomings and take appropriate action to fund necessary improvements."

"I am concerned about the judges and their safety.  This will be a top priority as chair of the public safety committee," Trammell said.

“Sometimes you just have to expose things to get things done because if you don’t expose them to the public the more it will continue to go unnoticed,” said Woody.

CBS 6 reached out to the Department of Homeland Security.