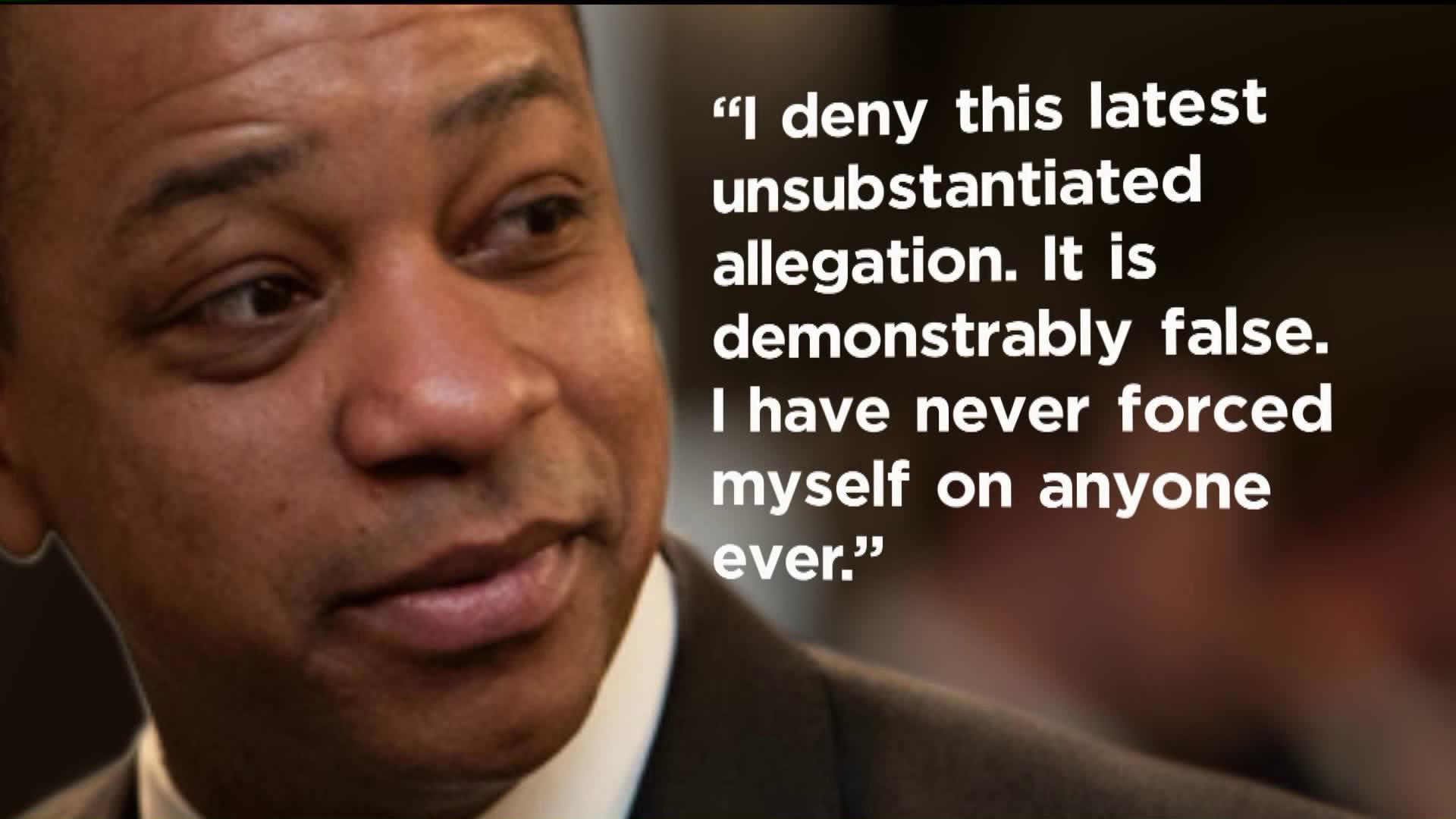 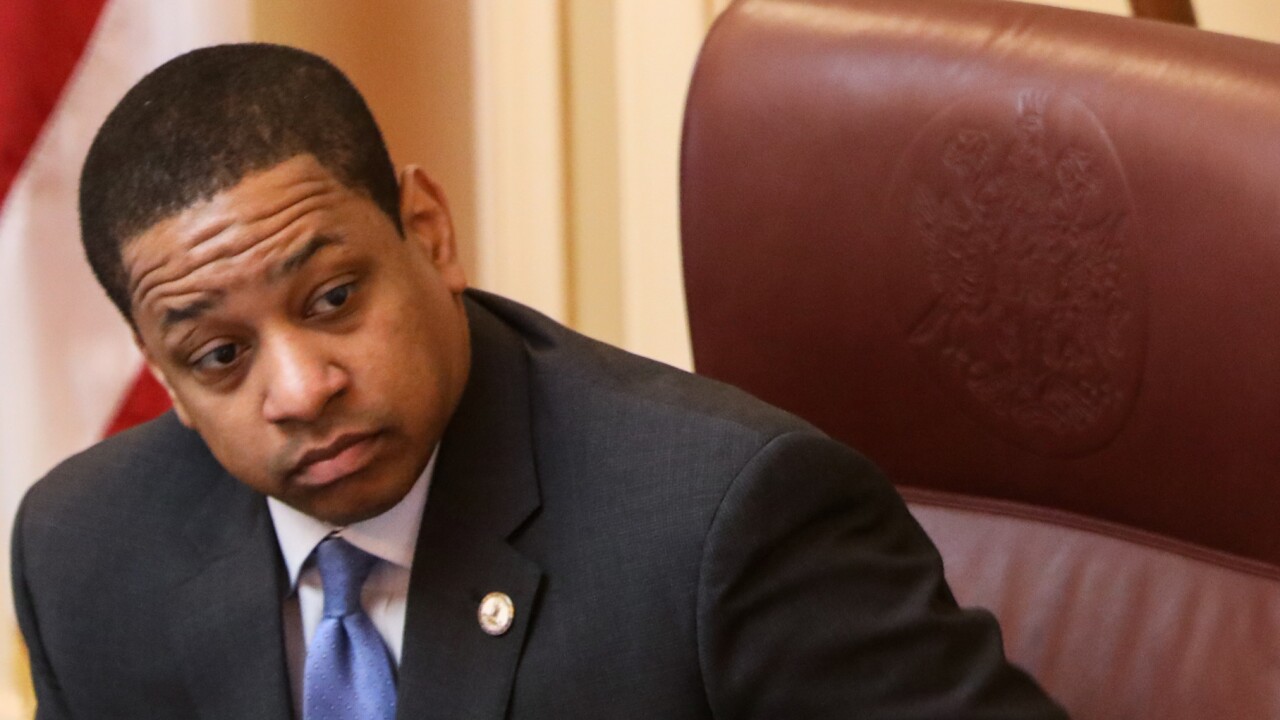 RICHMOND, Va. -- Virginia's Lt. Gov. Justin Fairfax is denying a claim made by a college classmate claiming she was raped by Fairfax in a "premeditated and aggressive attack" while they were undergraduates at Duke University in 2000.

The allegation poised by Meredith Watson was published in a release by her counsel, New Jersey based firm Smith Mullin P.C.

The assertion is the second sexual assault claim to be made against  Fairfax this week.

"Ms. Watson shared her account of the rape with friends in a series of emails and Facebook messages that are now in our possession," the release states.  "Additionally, we have statements from former classmates corroborating that Ms. Watson immediately told friends that Mr. Fairfax had raped her."

We serve as counsel for Meredith Watson, who was raped by Justin Fairfax in 2000, while they were both students at Duke University. Mr. Fairfax’s attack was premeditated and aggressive. The two were friends but never dated or had any romantic relationship.

Ms. Watson shared her account of the rape with friends in a series of emails and Facebook messages that are now in our possession.  Additionally, we have statements from former classmates corroborating that Ms. Watson immediately told friends that Mr. Fairfax had raped her.

Ms. Watson was upset to learn that Mr. Fairfax raped at least one other woman after he attacked her. The details of Ms. Watson’s attack are similar to those described by Dr. Vanessa Tyson.

At this time, Ms. Watson is reluctantly coming forward out of a strong sense of civic duty and her belief that those seeking or serving in public office should be of the highest character. She has no interest in becoming a media personality or reliving the trauma that has greatly affected her life. Similarly, she is not seeking any financial damages.

On behalf of our client, we have notified Justin Fairfax through his attorneys that Ms. Watson hopes he will resign from public office.

“I deny this latest unsubstantiated allegation. It is demonstrably false. I have never forced myself on anyone ever.

I demand a full investigation into these unsubstantiated and false allegations. Such an investigation will confirm my account because I am telling the truth.

I will clear my good name and I have nothing to hide. I have passed two full field background checks by the FBI and run for office in two highly contested elections with nothing like this being raised before.

It is obvious that a vicious and coordinated smear campaign is being orchestrated against me.

I will not resign.”

In a second statement by Watson's attorney released Friday evening, attorney Nancy Erika Smith stated that  Fairfax "used knowledge of a prior assault" against Watson "when he chose to rape her in a premeditated way."

"Ms. Watson was raped by a basketball player during her sophomore year at Duke. She went to the Dean, who provided no help and discouraged her from pursuing the claim further. Ms. Watson also told friends, including Justin Fairfax," the release states.

"Mr. Fairfax then used this prior assault against Ms. Watson, as he explained to her during the only encounter she had with him after the rape.  She left a campus party when he arrived, and he followed her out.  She turned and asked: “Why did you do it?” Mr. Fairfax answered: “I knew that because of what happened to you last year, you’d be too afraid to say anything.”  Mr. Fairfax actually used the prior rape of his “friend” against her when he chose to rape her in a premeditated way. Like he is smearing Dr. Vanessa Tyson, Mr. Fairfax is now smearing Ms. Watson."

Smith also shared a 2016 email exchange between Watson and former classmates at Duke. In the thread, Watson says she was raped by Fairfax.

The second claim comes days after Dr. Vanessa Tyson accused Fairfax of sexual assault at the 2004 Democratic National Convention. In her allegations, Tyson claimed that what began as consensual kissing "quickly turned into a sexual assault."

Fairfax denied Tyson's claims and said the encounter was consensual.

The top three Democrats in Virginia’s state government are currently contending with various controversies, including Gov. Ralph Northam and state Attorney General Mark Herring admitting to having worn blackface in the 1980s. The trio of controversies has thrown Virginia politics into chaos, as state Democrats look for the best way to move past the swirling issues.