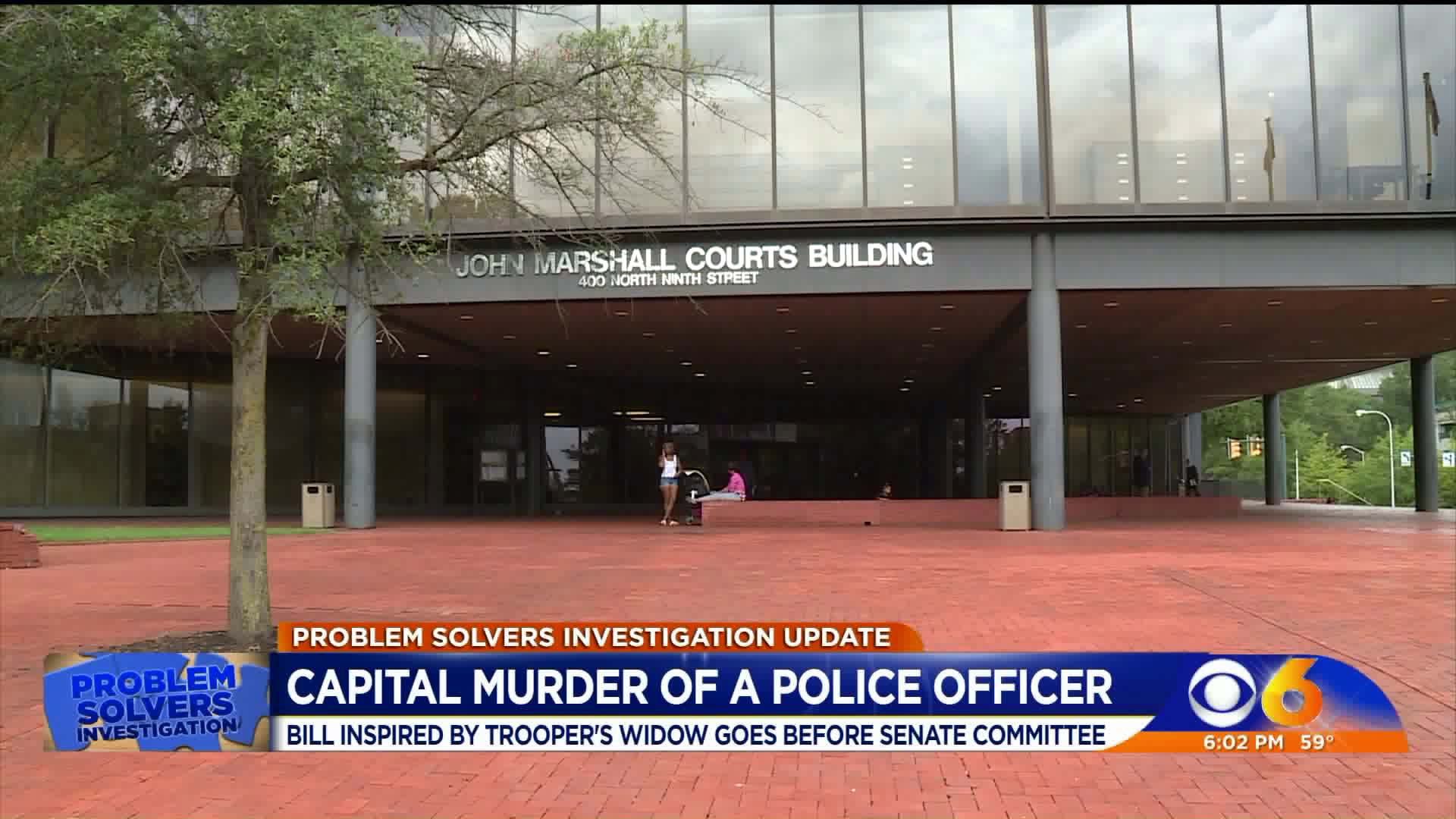 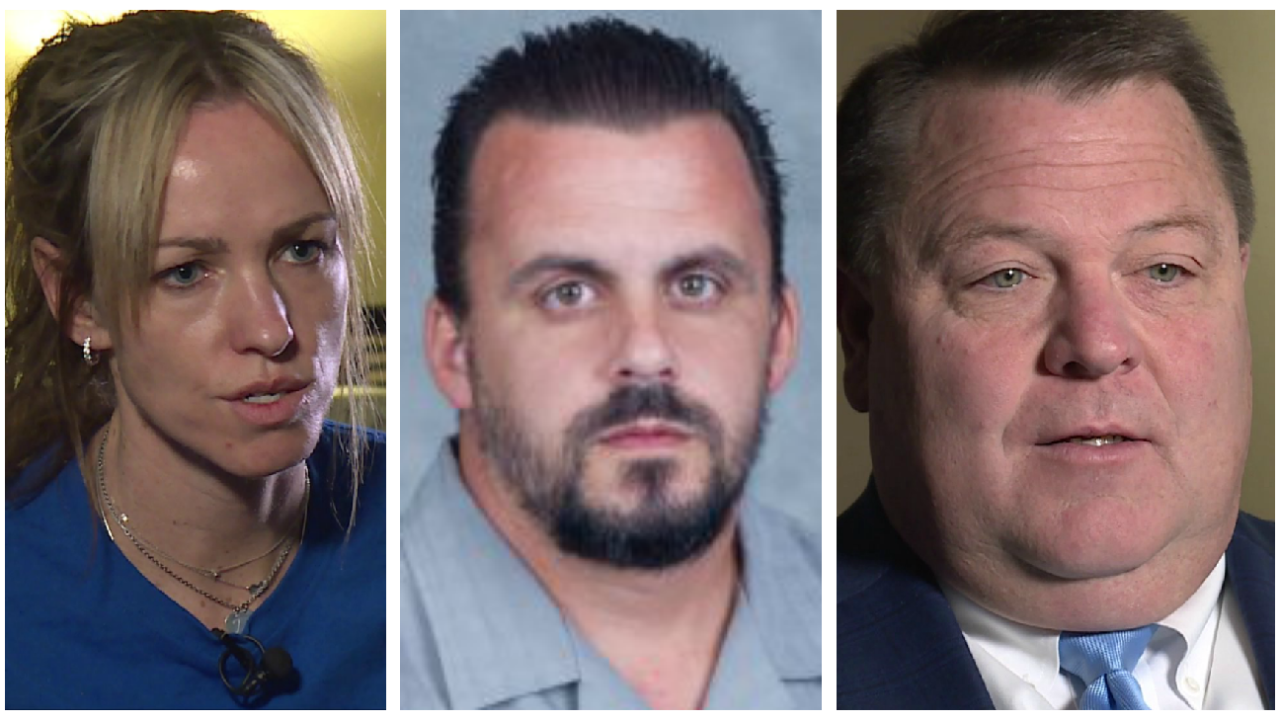 “I don’t want a family to go through this ever again,” said Mike’s wife Jaime Walter. “I know I can’t change it for my husband, but I need to change it for other law enforcement officers.”

Special Agent Walter was shot while on patrol in the city of Richmond May 26, 2017. The father of three died hours later.

Senator Bill Carrico and Delegate Todd Pillion heard Jaime’s pleas for change and drafted companion bills that would prohibit the reduction of a capital murder charge when it involves a law enforcement officer.

“I knew that we had do something legislatively to rectify this problem because anyone who takes measures to kill a police officer is going to kill anybody,” said Sen. Bill Carrico (R), Bristol. “When she was on camera talking about it made me think of my own wife when I was there and how much they stay up at night and worry how much they get that anxiety feeling when they hear a text or siren because they don't know for sure if that's the call they're can get that that’s their husband or family members.”

“This bill basically takes the capital murder section of the code that deals with the killing of a law enforcement officer it takes away prosecutorial discretion it makes them charge a lesser if they feel that it's not capital murder,” explained Carrico. “If they charge capital murder, it carries a sentence of life or death. This doesn't allow a judge or jury to make it 33 years or whatever. It makes it permanently life or a death sentence.”

The bill would ensure the Commonwealth is committed to a capital offense once charged. Wednesday, the bill was amended by the Senate Committee for Courts of Justice which moved the bill forward to the finance committee and added sentencing language that would make the minimum sentence for the offense life in prison if convicted.

The house version of the bill will go before a committee on Tuesday.

“Mike would say you got this. I believe that he’s here with me right now pushing me and guiding me and holding my hand and I think he’s doing that for all of us,” she added.

Five widows of fallen troopers were at Wednesday’s hearing to show their support of the bill. Three testified, including Walter, Michelle Dermyer and Betty Walker.

Trooper Chad Dermyer was fatally shot during a training exercise at the Greyhound station in Richmond in March 2016.

Master Trooper Junius Walker was shot on Interstate 85 in Dinwiddie in March 2013.

“I’ve walked in their shoes I’ve stood in Mosby and Gilpin Court, I worked undercover for a year in the city of Richmond I know what it's like,” said Carrico.

Carrico also has a son who is a member of the Virginia State Police tactical team.

“If you are making a decision you are going to kill police officer, we are not going to let you out of prison or we are going to put you to death.”

“This can be problematic in many ways one is it could tie the hands of a Commonwealth’s attorney,” said CBS 6 legal analyst and former prosecutor Todd Stone.

“That’s not really an appropriate thing for the General Assembly to be doing because only a prosecutor knows what their evidence establishes and what it can prove if they go to trial and taking that discretion away from prosecutors makes the system less efficient,” Stone added.

“I don't believe that,” said Carrico. “I think it makes them make a decision which they don't want to do.”

“When a police officer gets killed it’s a horrible thing but not every case is provable. Some cases are probably provable but not a slam dunk and in those cases where they are probably provable if a prosecutor is hamstrung so they can not have any flexibility in what they do with that case then the General Assembly has probably put that case in a situation where somebody would end up getting less time then they might have ordinarily gotten if this wasn’t there,” said Stone.

“If their case starts falling apart they have the option to nolle prosse and get another charge,” said Carrico. “Commonwealth attorneys that want to have a the prosecutorial discretion and want to oppose this are going to have to deal with those law-enforcement families when they do this,” said Carrico.

“They have to step up and they have to prove this because the next time they need help who are they going to call they’re going to call 911 and that officer is going to help them they shouldn’t have to worry about them being harmed,” said Jaime.

Jaime says this is the first of many steps in healing her broken family while sending a message to law enforcement and her children.

Jaime says that faith was lost the October day her children realized they will one day walk the same streets as their father’s killer.

“If you were in my situation what would you tell your children about accountability? Because, we tell them they have to be accountable but our laws are saying that they’re not and we have to change that,” said Jaime.

“Maybe there can be some sort of closure to know we as a family were able to make a change and I think that’s where we need to start we can help others and pay it forward to what people have done for us,” said Jaime. “It’s got to pass, because we have to protect and serve our police officers as well as they protect and serve us.”

“Lets be realistic, police are being targeted today you're not just being randomly shot because of an incident they're being targeted. We as a society are going to have to step up and say we’re not doing this and this bill sends that message,” said Carrico.