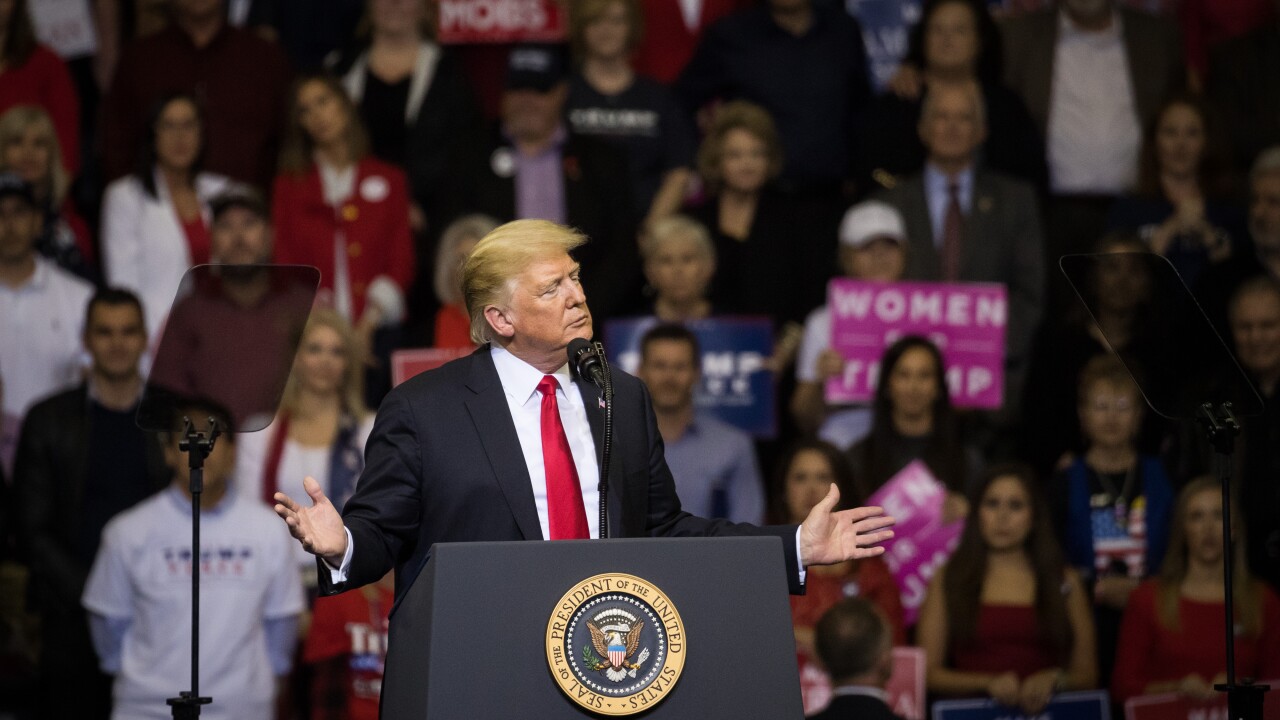 President Donald Trump addresses the crowd during a rally in support of Sen. Ted Cruz (R-TX) on October 22, 2018 at the Toyota Center in Houston, Texas. Cruz, the incumbent, is seeking Senate re-election in a high-profile race against Democratic challenger Beto O’Rourke. (Photo by Loren Elliott/Getty Images)

RICHMOND, Va. — After being solidly in the Republican column for decades, Virginia’s 7th District race could be a nail biter on Election Day, according to recent polls. President Donald Trump’s popularity could be the deciding factor as to whether Republican Dave Brat holds onto his seat in the House of Representatives or if Democratic challenger Abigail Spanberger can win.

“You can’t underestimate the Trump factor in Virginia,” CBS 6 political analyst Dr. Bob Holsworth, who attributed recent Democratic victories in the General Assembly to the fact that Trump’s numbers in Virginia are ‘very negative’, said .

While the last poll on the race, from Monmouth University in September, saw Spanberger a few percentage points ahead of Brat, no poll has been conducted since the candidates’ only debate .

Since the October 15 debate in Culpeper, the president’s approval rating has improved.

With rural counties almost surely voting for Brat and more urban parts of Henrico going to Spanberger, the political analyst said the suburbs of the 7th District will decide the election.

“Spanberger has to overcome a tilt of the district that tilts Republican,” said Holsworth. “Brat has to find a way of mobilizing the Trump voters without antagonizing the Republican-leaning suburbanites that don’t like Trump.”

Virginia’s 7th District stretches from the Richmond suburbs of Henrico and Chesterfield counties to the Northern Virginia counties of Spotsylvania and Culpeper, with rural counties like Louisa and Goochland in between.

It encompasses a wide range of demographics.

Political boundaries are clearly visible within the district.

In Henrico’s West End, Spanberger signs can be seen in yards with a few Brat signs throughout.

Changes in western Henrico, as well as leftward political shifts among women and younger voters, were significant forces that work in her favor.

“There are a lot of people who are fiscally conservative, but socially they’re a little bit more liberal,” said Lori Claxton, who works in the Short Pump area of Henrico County.

Alexia Murphy, 22, said she believed the Trump administration was causing the shift.

“Based off what President Trump has done, he’s kind of shown as a whole what the Republicans are about,” she said. “I wouldn’t be shocked if it did move to a bluer hue.”

Kayla Andrews, a nurse in Goochland County, said the election does have a heavy impact on the area, but no matter the outcome, the area as a whole needs to move forward, “because everybody is equal.”

Four years ago, Brat defeated incumbent and House Majority Leader Eric Cantor in an upset win in Republican primary. In the 2016 congressional election, Brat won more than half the vote in every county of the district. That same year, Trump won the majority vote in almost every county of the 7th District as well. But this election season, the Cook Political report considered the race between Brat and Spanberger a toss-up.

By Ben Burstein and Kirby Farineau (Special to WTVR.com)