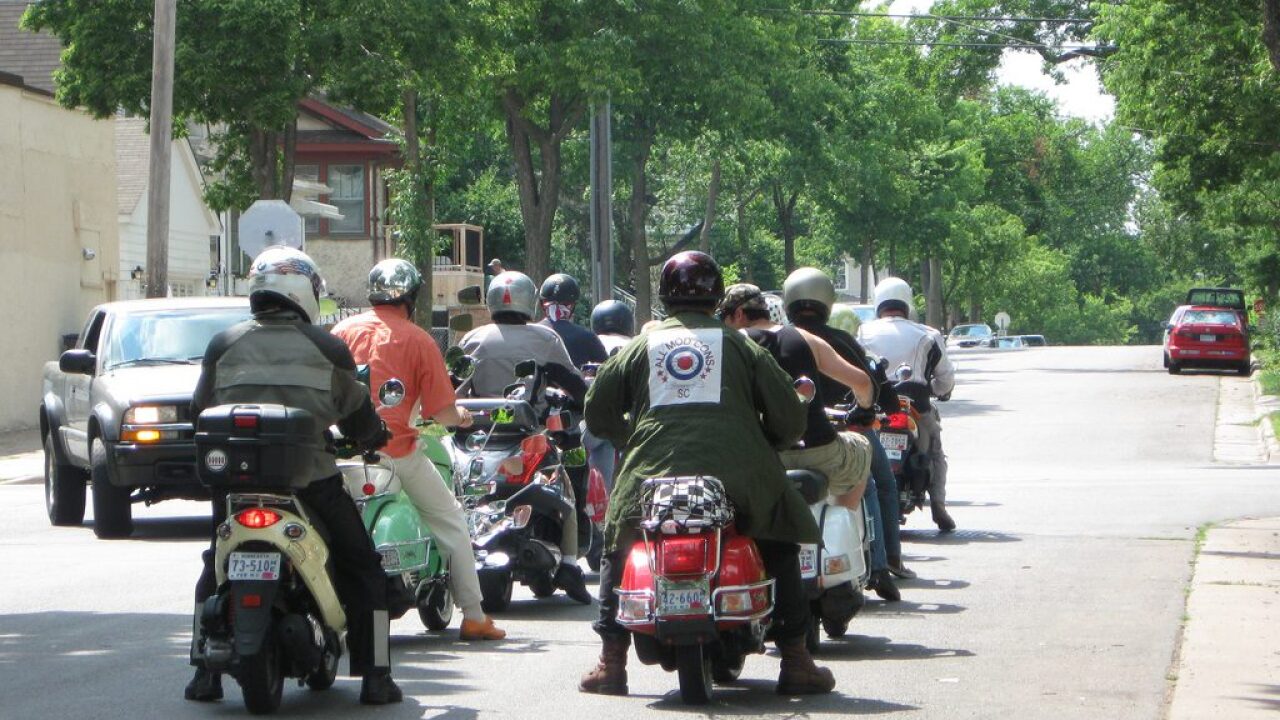 A group of Minnesota scooterists. Taken by Alix Bryan.

RICHMOND, Va. – Somewhere over the Rockies the giddiness hit Chelsea Lahmers, shop owner of MotoRichmond. She was traveling west with big news to announce after the 2017 Amerivespa rally in Seattle, a four-day party for scooter enthusiasts.

“…I was simply giddy to be able to announce that the town I love best would be the next host,” Lahmers recalled.

Amerivespa is the largest national rally held in celebration of two-wheel machines of all strokes. We’re talking about the 2-stroke and 4-stroke scooters that have better color palettes than a home improvement store; combined the machines create an orchestra of tak tak tak, brap brap, and vroom vroom.

In its 23 years, the annual event has only been on the East Coast once before, in Georgia, way back in 2003. Past locations have included New Orleans, San Diego, Denver, Portland and Knoxville. From June 6 to 10, approximately 600 to 800 scooterists from around the nation, Canada and Mexico will descend upon the River City for scooter-related shenanigans.

Amerivespa is not an international big bicycle race or at all similar to the Menuhin Competition, aka “Olympics of Violin.” According to organizers, it is probably a lot more adorable than those other headliner events, way friendlier and actually designed to showcase local business around the city.

“Among all of the rallies I’ve done –and I’ve done plenty – it’s one of the most interesting collections of scooter people I’ve ever had a chance to meet,” Lahmers said.

Lahmers recently celebrated 16 years in business – which evolved from mail-order vintage parts to a dealership selling new and used scooters and motorcycles. It was her method of getting to know everybody, everywhere that helped her land the winning Amerivespa bid.

“The first time you go to one, all you can think about is ‘how can my city do this?!,’” Lahmers said. “Richmond would be so great for this, once we have the community here to do the hard part, the legwork to put it all together.”

Enter the 7 Hills Scooter Club; its assorted members are artists, bankers, baristas, lawyers, writers, and engineers whose common spark is the machines they zip around on.

Left to right. Kristen Runberg and Chelsea Lahmers have been riding since the 90s.

“What makes a successful Amerivespa is twofold; a club and an involved shop,” said Josh Rogers, Vespa Club of America (VCOA) president.

“We are definitely making it uniquely Richmond,” said club member Kristen Runberg. “We want to show off the city more than some of the other towns have done…so we are going all over.”

Escorted rides – some slow and some fast, per scooter — take place around the Richmond-metro and include trips to Jamestown, Petersburg, Henricus, Goochland, and city hotspots. A local haunts ride for ghost hunters includes destinations like the Pump House and the Corner Minor home in Barton Heights.

“What Vespa enthusiasts have in abundance is wanderlust,” Rogers said. “People are excited about the history, and that it is on the East Coast. We get to see something we haven’t seen.”

The deal will be reciprocal.

“An Amerivespa event is like no other,” Rogers said.

Choosing a new host city each year allows for a slightly different composition of attendees each time, a mix of the local scooter community, the diehards, and many who haven’t seen the “scope and grandeur” of such an event, Rogers explained. Expect to see various groups of anywhere from 20 to a 100 scooters –likely more — exploring the city.

“You are going to get waved at a lot,” Rogers laughed. “By and large, we are a super friendly group — don’t hesitate to ask us questions.”

The Saturday event will lure hundreds of riders with $20 out to the Richmond Raceway, to scoot behind a pace car on the racetrack. The event, from 11 a.m. to 4 p.m., is open to the public and there will be food trucks, beer, local artists, around 20 vendors, along with test rides from Zero and BMW motorcycles and scooter vendors.  At 2 p.m., the gymkhana –an obstacle course — and scooter games get started. Don’t miss the slow contest, a ultimate challenge to see which rider is the last one rolling at the slowest speed.

“We just want all scooterists to realize this is cool,” Lahmers said. “Come to the party…you don’t have to be a hard-core scooterist.”

“Show up, talk to people, have a beer,” Runberg encouraged.

Rogers said the pinnacle event is the dinner and banquet held at the Altria Theater Saturday evening. Laurel Street will be closed to through traffic in front of the theater, and lined with all makes and models of classic and modern scooters.

“But you have to register to get all the cool shit,” Lahmers said. “Otherwise, there is no guarantee you are getting the right size t-shirt or getting a dinner.”

Registration is $100 for all access to events and it comes with a swag bag full of goodies, including a t-shirt and scooter patch showcasing Richmond legends that was designed by VCU graduate and 7 Hills club member Anthony Menez.

​“Seeing people having a good time who have this common link, it’s worth going to,” Rogers said.

So, come along and ride on a fantastic voyage that’s finally come to Richmond– just don’t forget to register before May 4, 2018. Visit Amerivespa.net for schedule and registration (website says registration closes May 1 but it doesn’t).