Buskey Cider, The Veil Brewing reflect on year one in Scott’s Addition 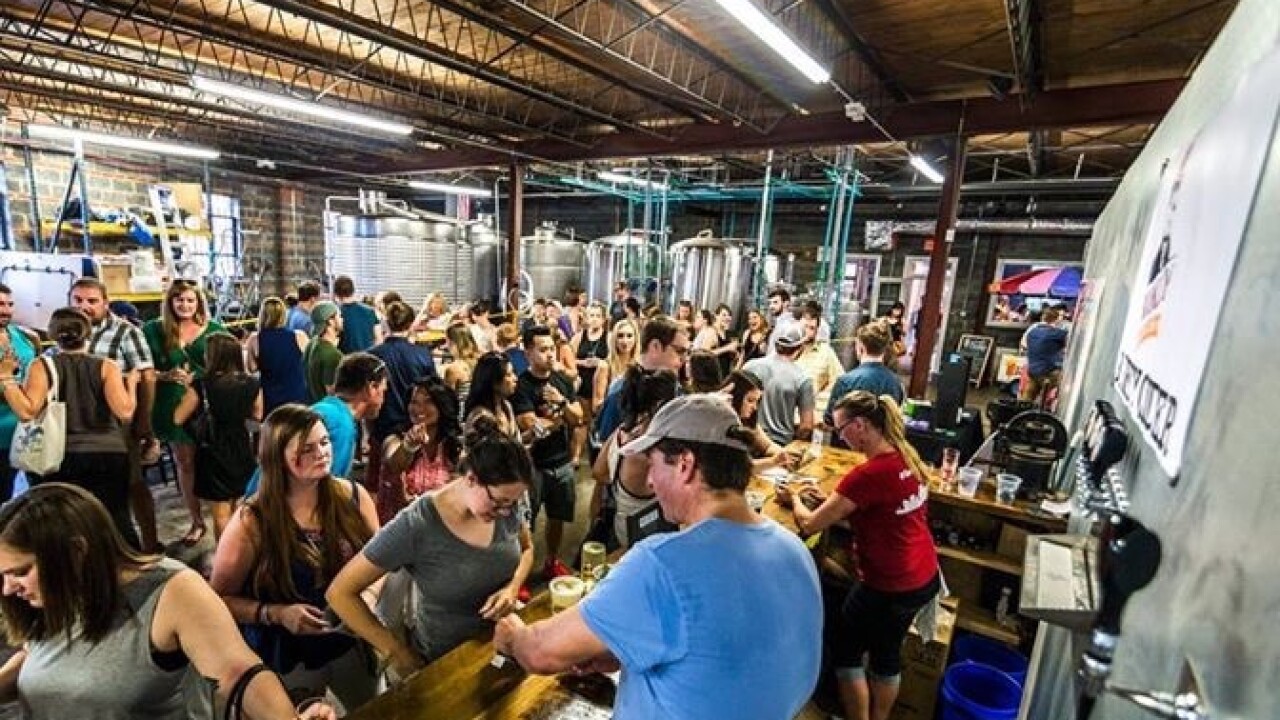 The crowd getting served at Buskey Cider

Then a new era fermented feverishly to yield a craft beverage hub; by the end of 2016, the historic district housed two cideries, one meadery, a distillery and four breweries — and Väsen Brewing Company is set to open within months.

Buskey Cider and The Veil Brewing Co. will both celebrate one year of booming business this weekend.

The Veil Brewing Co. in their first 365 days has received international applause but gets a weekly encore of locals wrapped around the block in anticipation of new releases.

”We’ve tripled our capacity in the first year and did not expect to need to expand at all,” Correll said. “We also were able to reinvest in a cross flow filter we didn’t anticipate being able to afford for years.”

Will Correll, owner of Buskey Cider.

Both brewers have moved into distribution, and both can their products – though The Veil has yet to brew enough beer to move cans out of the market – each week they quickly sell out of new can varieties. They distribute a small quantity of draft through Reverie Distribution.

Both emphasize how beneficial the location has been for business.  Buskey originally planned to grow in Williamsburg — a colonial place for a colonial beverage Correll said — but he opted for an urban cidery.

The Veil’s plan to convert the 11,000-square-feet building at 1301 Roseneath Ave., which once housed Coca-Cola offices, then a Baptist church, one of their most important business lessons.

“It’s a perfect location with a nice blend of commercial, residential and retail – with more to come,” said partner Dave Michelow. “Definitely an authentic neighborhood and worthy compliment to the surrounding, established neighborhoods like the Fan, Museum District and North Side.”

A look at The Veil brewery

The Veil also grew more than planned, Michelow said, probably by about 10 to 15 percent.

“It would be disingenuous to say that we aren’t proud of the good fortune we’ve enjoyed during this first year,” Michelow said.  “Behind the scenes, there are a lot of moving parts, and a lot of important decisions that are made daily, and to look back at the last 12 months and know that we got it right most of the time is rewarding.”

“However, the prevailing emotion around here is humility – we are sincerely grateful for the positivity and love we’ve been shown, especially here in Richmond,” he added.

Correll feels plenty of the love on tap as well.

“The amount of customers who have walked in and said ‘no offense but I’m not a cider guy,’ and then loved our product and come back for every new cider we release has been phenomenal,” Correll said.  “We didn’t realize how quickly people would take to our progressive and creative style of cider.”

“In many ways, customers are helping drive the creative process and they bring concepts and ingredients to us for consideration,” he added.

Matt Tarpey, head brewer at The Veil. The Veil Brewing Co. was rated number three in the world, out of a class of 10.
The brewery was also honored as the state’s number one best new brewer.

The one-year anniversary party for The Veil takes place for selected ticket holders only, on April 22. Their official birthday was April 16.  Tickets sold out for the event within hours.

Will they host a bigger party next year?

“That depends on how well this Saturday goes,” Michelow said. “Bigger isn’t necessarily better, and big events are a slippery slope when it comes to providing the best all-around customer experience possible.”

Buskey’s celebration will run Friday, April 21 through Sunday, April 23 and three new ciders will be released throughout the weekend.

On Saturday, taste the Hoppy Birthday Cider, featuring a blend of azacca and mosaic hops. Gold medal brewer turned cidermaker Alec Steinmetz said it is one of the hoppiest, yet best balanced hopped ciders ever.

The “Stayman in Business” Cider will be released on Sunday,  after five months of barrel aging that gives it an aroma of vanilla and oak with tannic finish.

Each day of the weekend, more than 10 ciders will be available. As an added bonus, local business Lush Cupcakes will be selling cupcakes made with Buskey’s RVA Cider.

Buskey Cider is located at 2910 W. Leigh Street. They are closed Mondays and Tuesdays. Open 3- 9 p.m. Wednesday though Friday and open 12-9 p.m. on Saturday and Sunday.