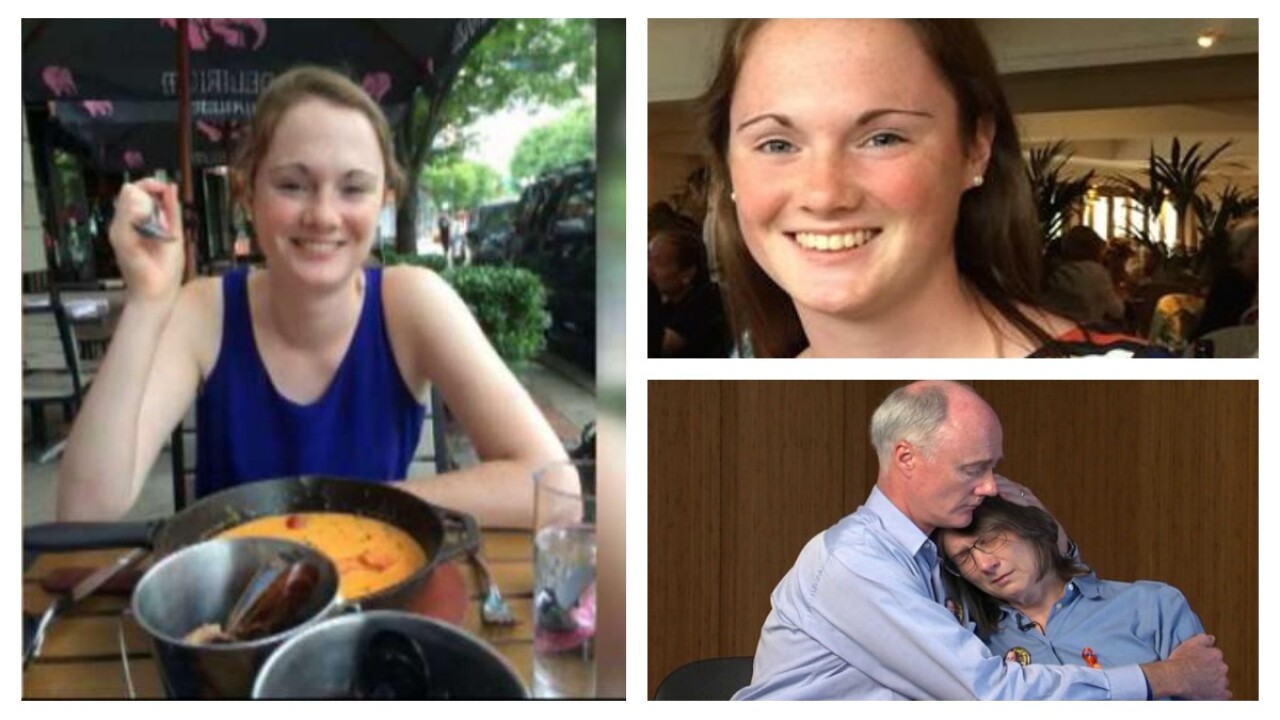 CHARLOTTESVILLE, Va. -- A crew of Chesterfield Sheriff's Department members who had joined the search for missing University of Virginia student Hannah Graham found human remains along an abandoned property off of Old Lynchburg Road in southern Albemarle County. Saturday's discovery came more than a month after Graham was last seen walking along the Downtown Mall in Charlottesville, Virginia on September 13.

"Countless hours, thousands of hours have been spent by literally hundreds of law enforcement and civilian volunteers in an effort to find Hannah. We think perhaps today proved their worth," Charlottesville Police Chief Tim Longo said during a Saturday evening press conference.

The remains were taken to the Medical Examiner's Office in Richmond to be autopsied and positively identified.

"Again, these are human remains," Longo said. "Forensic tests need to be conducted to determine the identification of those remains."

Longo said the call was made to Graham's parents in an effort to provide them with quick and timely information.

At this time our thoughts go out to the UVA community and John and Sue Graham, and all who have been touched by #HannahGraham.

"This investigation is complicated. It's a complex criminal investigation," Longo said. "It's unlikely that we'll have any information in the very near future."

Longo thanked search volunteers and the Virginia Department of Emergency Management who helped in the search for Hannah.

"The remains will be taken to the Office of the Chief Medical Examiner in Richmond for examination, autopsy and official identification," Albemarle Police Chief Steve Sellers said. "Because the remains were located in Albemarle County, our agency is now the lead on the death investigation portion of this case."

Sellers asked anyone who saw anything suspicious in the area where the remains were found to call police.

"We cannot and we will not jump to any conclusions regarding today's discovery," he said. "I ask for the public's patience as we move forward."

The public search for Hannah Graham scheduled for Walnut Creek Park on Sunday was canceled, by the Virginia Department of Emergency Management.

"Authorities are focusing their attention on recent evidence, which limits law enforcement resources necessary to carry out a public search," said VDEM.

Jesse Matthew Jr. aka LJ was first named as a person of interest six days after Hannah Graham was last seen.

What efforts have been made to find Hannah Graham, over the past five weeks?

This is the first time in the state’s history that an aerial drone has been used in a missing person search.

Authorities offered a $100,000 reward for information leading her safe return. More than 3,000 tips to Graham’s possible whereabouts have poured in.

Property owners with large parcels in surrounding counties have searched their land and reported back anything suspicious.

More than 1,200 volunteers have searched around Charlottesville for clues leading to Graham. And the search area has expanded to include U.S. Route 29, outside of Charlottesville, where other women reportedly disappeared.

Virginia State Police focus on other cases -- any possible connections

While the search for Graham is paramount for the Charlottesville Police Department, solving the abduction and killing of Morgan Harrington, a Virginia Tech student who went missing in October 2009, is a priority for the Virginia State Police.

Sources close to the investigation confirmed to CBS 6 reporter Laura French that Matthew has been forensically linked to the 2009 disappearance of 20-year-old Virginia Tech student Morgan Harrington. DNA from the Harrington case is linked to an unsolved 2005 rape in Fairfax.

Local Yellow Cab owner Mark Brown said his cabbies who knew Matthew say he was driving a cab the night Harrington went missing. Matthew held a taxi cab license in the city of Charlottesville from 2005 to 2010. A source close to the case confirmed that police recently impounded the cab Matthew was allegedly driving the night Harrington disappeared.

The Virginia State Police said they "will release new information at a time and in a manner that does not jeopardize the integrity of this ongoing, complex criminal investigation."

The day after Jesse Matthew was named a person of interest in Graham's disappearance, he went into Charlottesville Police Headquarters and asked to secure a lawyer. He did, and then he left the building without speaking to police. He reportedly sped away in his sister's car, shaking the law enforcement detail overtly following him.

Early in the evening on the Friday that Graham disappeared, Matthew attended the Covenant Eagle's football game, the team of a prestigious private school where he coached. That was after his work as an orderly at the UVa. Medical Hospital. An independently reported timeline follows his steps throughout the evening the night Graham went missing.

"He's as gentle as they come," said his dad and friends from Monticello High School described Matthew as “the big man on campus” and, “a teddy bear.”

There are two instances when sexual assaults were alleged against Matthew, once at Liberty University and once at Christopher Newport University. The Lynchburg Commonwealth's Attorney said the alleged victim at Liberty did not want to prosecute. CNU officials said they are withholding his record pursuant to the exception from mandatory disclosure, in cooperation with law-enforcement agencies.

***Information from the CNN Newswire contributed to this report.***