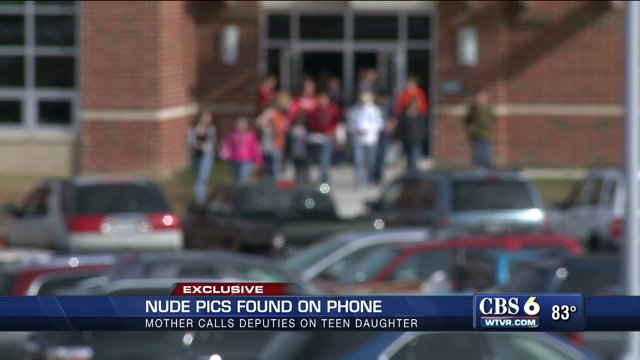 DINWIDDIE COUNTY, Va. -- A Dinwiddie mother got a nasty shock when she went through her daughter's cell phone and tablet. The pictures she discovered were so disturbing that she turned the girl in to sheriff's deputies.

The parents discovered their 13-year-old daughter, who is about to enter the eighth-grade, had been sending and receiving naked pictures of other teens using her tablet.

And the deeper they dug, the worse it got. In fact, things got so bad they called in the sheriff's department to investigate.

"What scares me is, this is much bigger than we realize. How many others are doing this and you don't realize it," asked the Dinwiddie County mother of two.

CBS 6 News is not revealing her name to protect her family's identity.

The parents became aware of what their 13-year-old was doing, when their other child heard voices in her bedroom around 4 a.m.

The parents then confiscated the electronics.

"Looking through the phone and the tablet we did find sexual pictures, conversations that were very inappropriate for her age," she said.

While none of the nude photo's showed their daughter with anyone else, there were pictures being sent back and forth with other boys.

"Everybody wanted to be her friend, because according to these people, she was cool now," she said.

But they also made a startling discovery involving whom they believe is an area high school senior.

"We believe them to be 17-18ish... Definitely older than her. Did request that they have sex."

The parents said that they called in the sheriff's office to protect their daughter even though she could face criminal charges.

"We did this now to protect her for now and in the future, because this could get worse. She could be taken," she said.

Commonwealth's Attorney Lisa Caruso said there are other options for the teen, not necessarily going through the court system.

"What's called diversion in the juvenile justice system. That's a 12 week program and it would be group classes. The parents would get involved [and] there would be some counseling," Caruso said.

However, the older teens could face felony charges depending on their ages.

The mother said while some may criticize their decision to go to sheriff's investigators, they did so out of fear. They did not want someone to see the pictures and try to find their daughter.

"What she's facing may be harsh, but we feel it's for her own protection," the mother said.

And the mother has important advice for other parents to keep their children from accessing dangerous apps.

"Please put parental controls on everything. I was informed that if you take it to the store... wherever store you buy it from, they can put all kinds of locks and controls in place, so that they can't access these apps," she said.