Activist carried out of City Council meeting after verbal confrontation 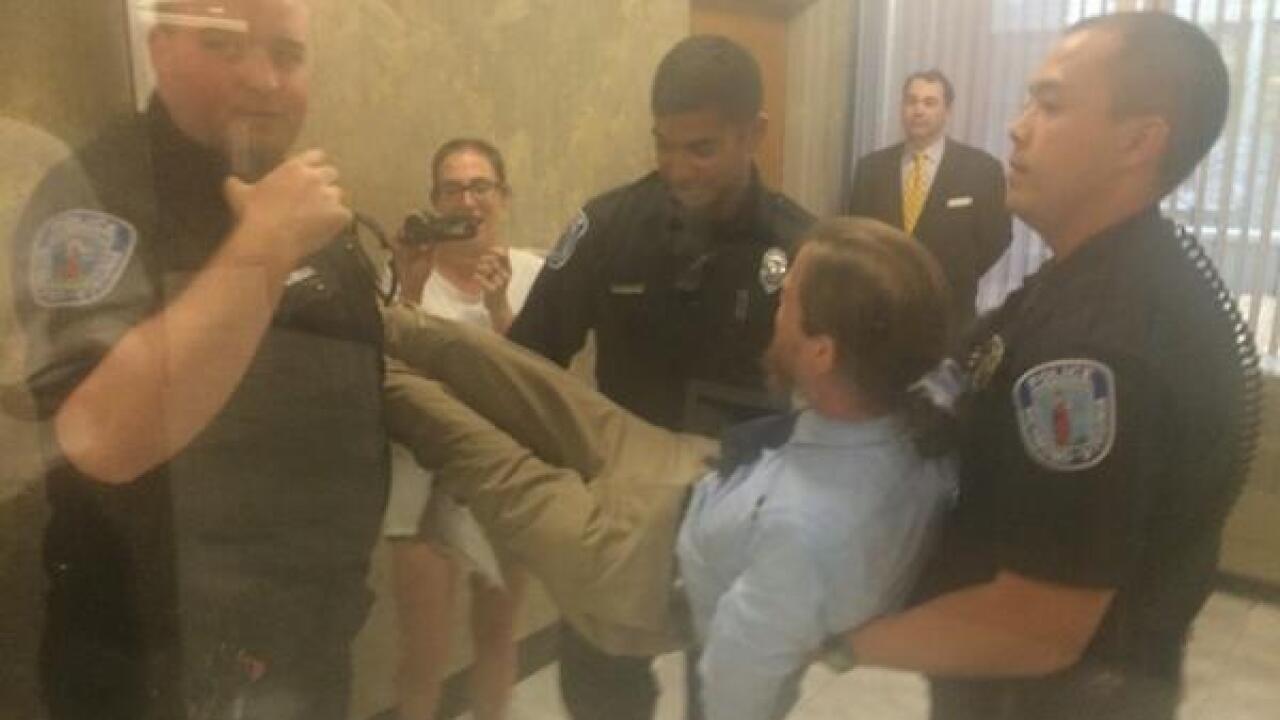 RICHMOND, Va. (WTVR) -- Richmond City Council had to take an unscheduled recess Monday night as passions erupted prior to discussion and a vote about the remodeling of a city park that is frequently used by homeless people and those who provide services.

Chris Dorsey, a former city sheriff candidate and activist who frequently wears his handgun to meetings, was carried out in handcuffs after a verbal confrontation with City Council liaison Steve Skinner over Dorsey’s presence in the press box.

Watch Dorsey’s video of the confrontation below. In it Dorsey alleges that Skinner is threatening him, and is "in his space."

Skinner is seen in the video alleging that Dorsey gestured to his gun as he told Skinner to step away from him. Dorsey was carried out and issued a no trespassing order.  It's a rarity for anyone to be barred from council meetings.

Mo Karnage, well-known activist with Richmond’s Anarchist Collective, called City Council President Charles Samuels a “dingo” when he didn’t allow her to discuss the fate of Monroe Park before it was scheduled to be discussed.

It was just one of the disruptions included that prompted City Councilwoman Michelle Mosby to tell the crowd she was very disappointed with the public outburst. Councilwoman Kathy Graziano agreed, telling CBS 6 Reporter Jerrita Patterson "We council are very respectful to the citizens. I would expect in return that citizens who are attending a public meeting would be respectful. If citizens are disrespectful or create a commotion then they need to leave the meeting and we need to continue our orderly discussions."

Monroe Park, which is largely  bordered by Virginia Commonwealth University properties, has been the focal point of protests and bitter arguments over how a proposed remodeling – the first in more than a generation – should proceed.

Dorsey is a regular speaker during council meetings, frequently critical and accusatory. He has publicly said he believes council members break the law and should be treated like criminals. See Mark Holmberg’s election-day profile of Dorsey here.

Despite the chaos, Richmond City Council voted to lease Monroe Park to nonprofit group Monroe Park Conservatory for the next 30 years.

The City of Richmond will continue to own the Park and will retain the right to terminate the lease at any time, according to the nonprofits posting.