Truckers gearing up for ‘Ride for the Constitution’ 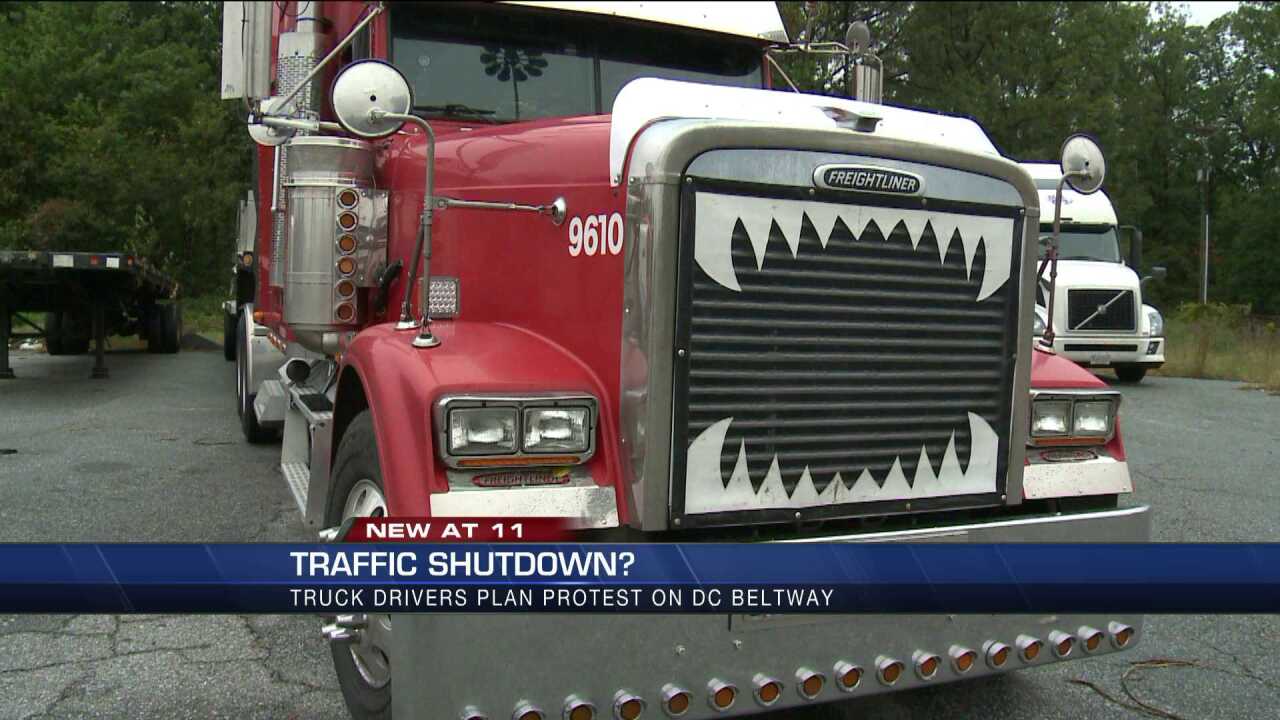 RICHMOND, Va. (WTVR) — How many truckers will participate in the “Ride for the Constitution” rally around the DC beltway Friday through Monday?

No one has a clue, really.

Various media outlets have reported it as a hoax, as “poorly organized” or have estimated a low turnout. Rumors about numbers, website shutdowns and National Guard blockades are flying faster than a deadheading Cat-powered Peterbilt.

We’ve seen recent rallies – like the Million Muslim March (which drew a few dozen) - fall far short of their promises.

So what could happen with this one? Truckers told us it could be a few hundred big rigs rolling, or thousands.

And what’s it about?

We went to the Doswell Truck Stop that was serving as one of the staging areas Thursday afternoon.

Just a few truckers had rolled in when we pulled up at 4:45 p.m. Within an hour, nearly a dozen were parked, and more were pulling in – from all over the country.

“The way Congress is doing, they’ve basically throwed our Constitution in the trash,” said Alabama trucker Brad Higgins, who had erected a large U.S. flag on a 4x4 salt-treated post chained and rigged on his empty flatbed trailer.

Tom Null, a Lafayette, Indiana trucker who has been rolling for 40 years and 3 million miles, said “we’re going to participate in the demonstration around the beltway in D.C. We just want to let government know that we’re tired of them doing un-Constitutional things constantly. We don’t like the way the banking is going, with the Fed printing $85 billion dollars every month, diluting our money. My tires are costing 500 bucks a piece now.”

His wife, Suzy, came along for the rally – a rare road trip together for a couple who raised 4 children and have 15 grandkids. “90 trillion of un-funded liabilities that we have with Medicare and Social Security, all these giveaways. You can’t just keep giving stuff away. People need to work.”

The loose plan is for the truckers to roll together at slower than normal speeds down the beltway, snarling the traffic and sending a diesel-powered message that they want the government to start serving the people and following the Constitution, they said. Complaints include fuel taxes, tolls and increasing regulation that they say has made it almost impossible to make a decent living.

“My health care premiums tripled October the first,” said Higgins, who has a wife and four children at a home he only gets to see once a month because he has to stay on the road to pay all the bills, fees and taxes. He blamed his sharp rise on “Obamacare . . .it should be a choice to the American people whether they have insurance or whether they don’t have insurance.”

The federal government has grabbed far more power than the Constitution gives it, the truckers said.

“We don’t need the feds running every little berg between here and California,” said Tom Null. “They can run their own life. That’s what America is about is local government.”

Mike Bethuy, a Michigan trucker, drove his trailerless tractor to the rally, even though he said he can’t afford the fuel and the missed work. Most truckers won’t be able to come because they’re in the same situation, he said. “If I was to go home right now and shut down like the government has shut down, I’d be in the hole in less than two days.”

Military veteran Stanley Lavy said he can’t afford to join the rally either. “I gotta do it,” he said. “I gotta do it for me, my family and my country.”

Some of the truckers acknowledged they could really shut down the country if they all banded together and stopped making deliveries. In this same-day delivery culture, where everything from grocery stores to gas stations depend on truckers, it would be a matter of days before shelves and gas tanks would be empty. Warehouses are largely a thing of the past.

“It would mess up everybody,” his wife added.

“No,” said Higgins, “we don’t want to do anything that’s going to hurt or cripple the country.”

But they want to the President and Congress to hear their quiet roar of displeasure at the direction they’ve steered the country.

She says hard-working families like her own feel it.

“Yeah, you feel it. Especially when you have 15 grandkids. And you start thinking, ‘What’s this going to be for them?’ That’s why we’re here.”

There’s little question that even a few trucks driving together slowly on the beltway could snarl roads already prone to maddening traffic jams.

The Virginia State Police has issued this statement:

Virginia State Police is aware of the proposed convoy of commercial vehicles and is preparing accordingly with the region’s law enforcement agencies and the Virginia Department of Transportation (VDOT), just as we have done in the past for similar demonstrations held within the National Capital Region. As long as the vehicles comply with Virginia law, then the Virginia State Police will not interfere with their activities.

VSP will have additional troopers working Friday and on through the weekend in Northern Virginia to respond to any incidents that may arise – traffic crashes, disabled vehicles, etc. – in order to expedite clearance of the highways and keep traffic moving safely throughout the region.