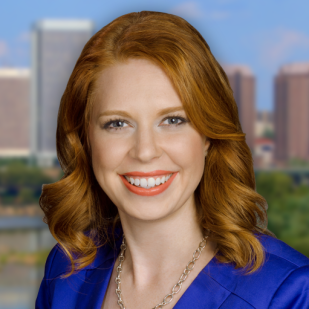 Carrie welcomes viewers to contact her at crose@wtvr.com. You can also follow her on Twitter @SouthernRedRose and “Like” her Facebook Page at facebook.com/CarrieRoseCBS6. Carrie joined the CBS 6 family in December of 2008. She also served as your weekday Noon meteorologist through 2013. In 2014, she shifted her mid-day focus to visiting classrooms to teach about the weather. If you’d like Carrie in your classroom, email her at crose@wtvr.com to schedule a visit!

Although Carrie’s parents still live where she grew up near Atlanta, Georgia, much of her family is in Virginia. She is thankful to be home with loved ones after spending more than six years in Oklahoma studying meteorology and beginning her broadcast career.

Carrie graduated in May 2006 from the University of Oklahoma with a B.S. degree in Meteorology, with minors in Mathematics and Broadcast Journalism. Carrie’s “weather story” goes back well before college, though.

Her father tells the story of when Carrie was a little girl playing in his office, dictating the daily weather report on his tape recorder. Carrie’s fascination with the weather increased through her youth. Her persistent interest in “sky watching” led her to put a few foot holes in her parents’ roof while climbing outside her bedroom window in high school to watch approaching thunderstorms from afar. With this deeply rooted interest in weather, combined with strong skills in mathematics and science, Carrie accepted several scholarships and moved a thousand miles away to Norman, Oklahoma. There, she attended the University of Oklahoma, widely considered to be the finest undergraduate Meteorology program in the world. As a junior and senior undergraduate student, she also worked as an intern at KWTV News 9 (a CBS affiliate) in Oklahoma City, beginning her training and introduction to Broadcast Meteorology.

While living so far from home and working through the strenuous curriculum at the University of Oklahoma, Carrie realized the critical difference mentors made in her success and happiness as a student. She and her best friend in the program, Christine, created a Meteorology Mentoring Program that still thrives today, encouraging upperclassmen in the Meteorology program to reach out to and mentor Meteorology freshmen and sophomores.

As a senior at OU, Carrie was officially hired as the Weather Producer at KWTV News 9. She went to classes the first half of the day, and worked into the night at the television station. Oklahoma City is considered to be the most intense severe weather market in the country. There, she coordinated on-air severe weather coverage. After graduating, she later added on-air duties to her position at KWTV, as well as expanded the weather video presence online with her Weather Vlog. Carrie remained at KWTV until December 2008, when she moved back east another thousand-plus miles to join the WTVR family.

Carrie and her husband live in the City of Richmond along the James River, and they frequently enjoy walks through the City and in the James River Park System. They also take in their fair share of historic sight-seeing. Her favorite season is Autumn, and she eagerly awaits the next fall foliage show every year.

On most Friday afternoons, you can find Carrie volunteering at the Science Museum of Virginia. Stop by for a Science on a Sphere presentation!

Carrie also serves with the Greater Richmond Chapter of the American Red Cross. Look for her at education and outreach events.

Among her interests are reading, running, writing, teaching, watching movies, traveling and spending time with her families in Virginia, Georgia and Alabama. She is a member of the National Society Daughters of the American Revolution, with one of her patriots originating in Henrico County. Carrie is a past board-member of Maymont’s Dooley Noted Society, and remains an active member today.