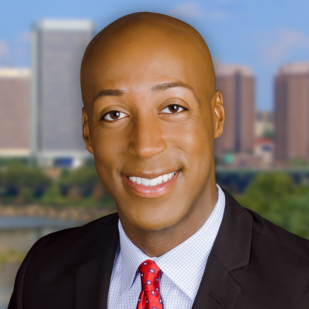 Lorenzo Hall is an Emmy award-winning journalist who anchors CBS 6 News at 5pm and 530pm. He also serves as an Investigative Reporter for CBS 6 News.

Lorenzo joined CBS 6 in 2008, and has covered a range of stories, including the inauguration of President Barack Obama, all-access with Governor Bob McDonnell, 2011’s East Coast earthquake and he’s also flown though a hurricane multiple times aboard a P-3 hurricane hunter aircraft.

However, his most memorable assignment while in Central Virginia centers around a Richmond teen, who lived in a homeless shelter with his mother and sister. That story got the attention of Richmond City Council members, forcing them to rethink their approach to funding for the homeless.

Prior to joining CBS 6, Lorenzo served as general assignment reporter and weekend evening anchor at KOMU-TV, the NBC affiliate in Columbia, Missouri.
In Missouri, Lorenzo also worked as a political reporter for one of the nation’s top-rated NPR affiliates, KBIA-FM and is a proud graduate of the University of Missouri’s School of Journalism. At Mizzou, Lorenzo spent a portion of his last semester touring Europe to study journalism practices in Belgium, France, Italy and Germany.

A Washington, D.C. native, he also gained experience through work and internships at WRC-TV, the NBC owned and operated station in Washington and WUSA-TV, the CBS affiliate.
Lorenzo started his career in high school as a correspondent for BET’s award-winning talk show, Teen-Summit.

In his free time, you’ll find Lorenzo reading, exploring restaurants in Richmond, volunteering, exercising or hanging out with family and friends.

Lorenzo is happy to call Richmond home and would love to hear from you.