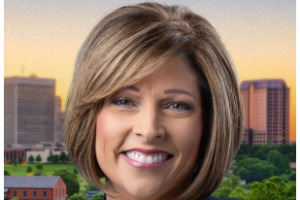 I was only 15 when I first stepped foot into the television studios at WTVR. I was lucky enough to be chosen to be one of Channel 6’s For Kids’ Sake Ambassadors.

We had a local children’s television show that aired on Saturday mornings, and that’s when I decided “what I wanted to be when I grew up.”

After graduating from J. R. Tucker High School in Henrico County, I went on to study Mass Communications at James Madison University.

I took my first television news job at a small community television station in Martinsville, Virginia as an anchor, reporter and local talk show host.

Then, I moved to Roanoke where I worked for at the NBC affiliate, WSLS 10, for almost five years.

I was an anchor, producer and health reporter there.

Since returning home to Richmond, I have spent about 10 years covering the news in Central Virginia from the anchor desk and as a reporter out in the field. I now anchor CBS 6 News at 5 and 5:30 with Rob Desir, but I have also anchored the morning news and hosted “Virginia This Morning,” during my time at WTVR. I can honestly say there’s no place I’d rather work.

I was born here, and I am so glad to be back home.

I really love being close to my family and living where I grew up. My husband and I are the proud parents of a little boy and two dogs we adopted from local rescue groups, Capt. Jack and Roddy.