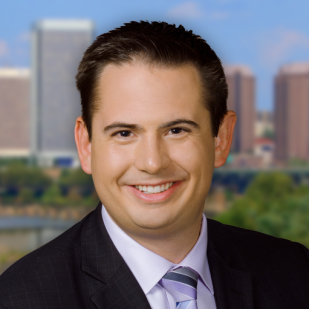 Joe St. George is an anchor and reporter with CBS 6.

You can see Joe as a political and investigative reporter during the week and can catch him anchoring evening newscasts on Sundays.

Since arriving in Richmond in 2012, Joe has been on the scene for nearly all of the region’s top stories: from missing UVA student Hannah Graham to the stabbing of State Senator Creigh Deeds to the Navy Yard shooting in Washington D.C.

Joe specializes however in political reporting — having covered the General Assembly for several sessions as well as the campaigns of Mark Warner, Terry McAuliffe and Tim Kaine. Joe was one of only a handful of reporters in the room the night Congressman Eric Cantor lost his seat.

Joe is most known for his coverage of the corruption trial of former Governor Bob McDonnell. As one of the only journalists to sit through everyday of the six week trial, Joe field anchored verdict coverage and announced the jury’s decision as it came down live across CBS 6.

Joe’s reporting style has made him a regular guest on radio programs in the region including WRVA and WNTW in Richmond, WHKT in Hampton Roads and WNEW in Washington D.C.

Prior to joining CBS 6, Joe was a political reporter in Davenport, Iowa for the #1 station in the Quad Cities where he covered the Iowa Caucuses and had exclusive interviews with candidates such as Mitt Romney and Joe Biden.

His CBS 6 Special Reports have taken him to places outside Central Virginia including Boston, Massachusetts and have focused on abuse in government.

Joe began his career in journalism as an intern in the Washington D.C. Bureaus of CNBC and NBC News. He credits them for instilling in him a love of reporting the news.

Prior to entering journalism, Joe was active in politics.

Joe served as a White House Intern to the President’s Senior Advisor as well as a New Media Director for a Member of British Parliament in London, England.

In 2011, he received the University’s Amoddio Award for Excellence in Public Affairs and in 2013 became a member of Catholic University’s Alumni Association Board of Governors.

A native of Youngstown, Ohio, in his free time, Joe enjoys playing golf and eating good meals with friends.

Do not hesitate to reach out to Joe on twitter @joestgeorge.