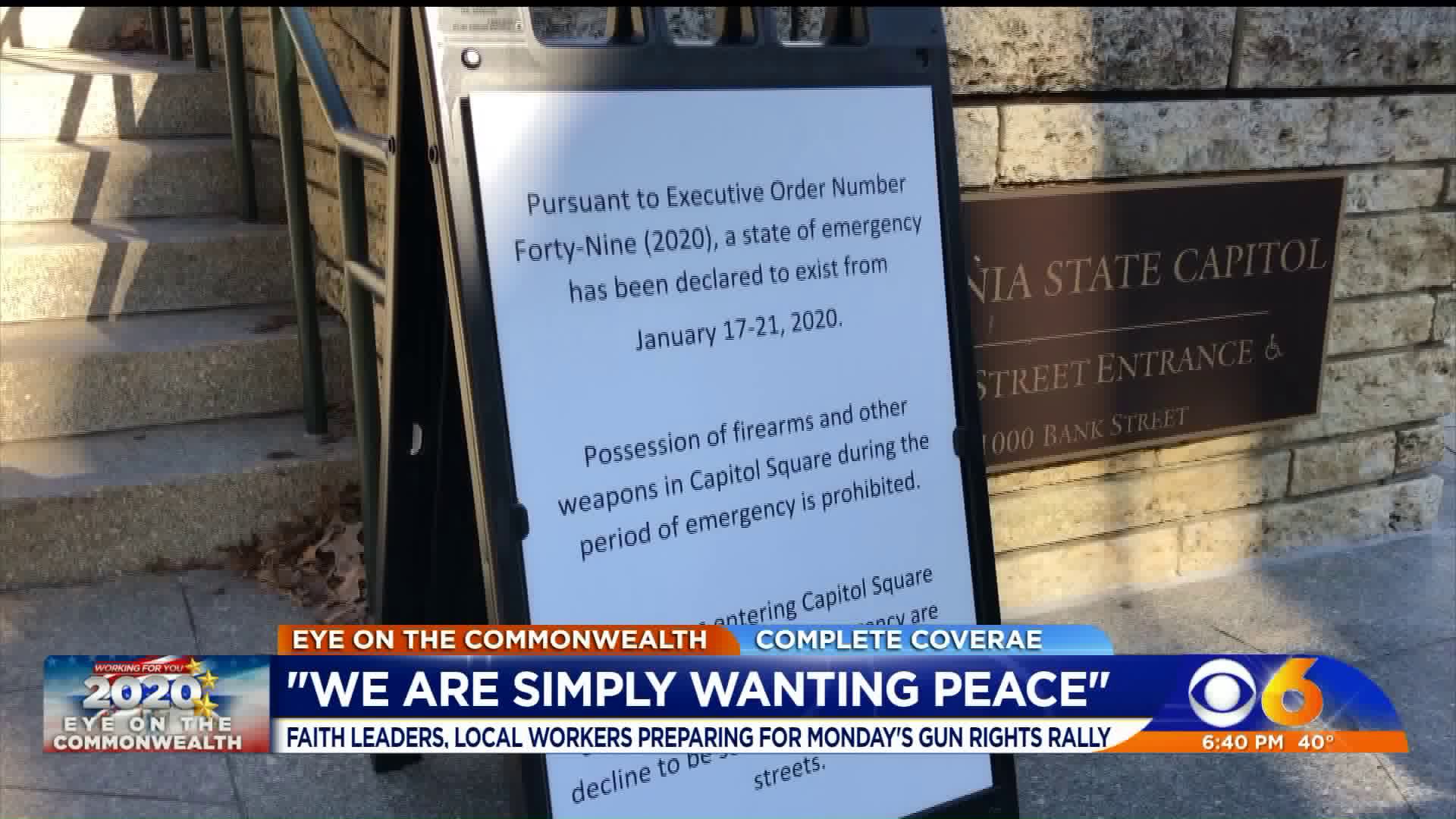 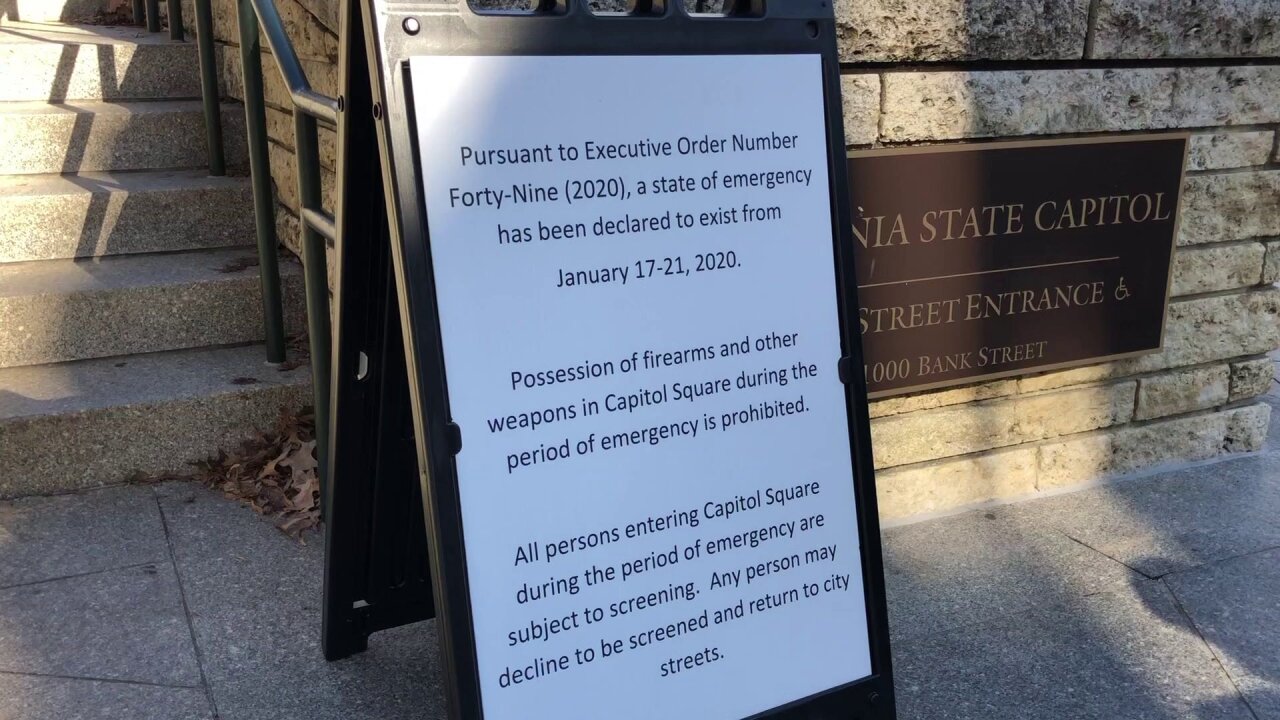 RICHMOND, Va. -- Interfaith leaders will hold a vigil Monday morning before thousands are expected to attend a gun-rights rally on Lobby Day at the Virginia state Capitol.

Organizers said the prayer vigil at a church not far from Capitol Square seeks to give the community another layer of security.

"We felt it was just important not to let fear be the overcoming vibration," Rev. Linda Higgins of St.John's United Church said. "If it was just the annual gun rally, this event [the prayer vigil] would probably not happen."

But Higgins said Lobby Day is completely different in 2020.

"This event is happening because of the fear mongering that has been happening around the possibility that there will be people from out-of-state who may be here to cause violence," Higgins said.

“Possession of firearms or other weapons in Capitol Square during period of emergency is prohibited.”

Northam: Militia and hate groups plan to 'disrupt our democratic process with acts of violence'

Gov. Ralph Northam said violent threats from out-of-state militias and hate groups prompted him to issue an executive order to temporary ban on guns and all other weapons from Capitol Square through Tuesday p.m.

Northam said those militia and hate groups plan to "disrupt our democratic process with acts of violence."

Officials said state and city police will be on patrol and monitoring the areas surrounding Capitol Square.

Businesses near Capitol Square like Edible Arrangements , Capitol Waffle and Maple Bourbon are taking precautions by either closing up shop or keeping watch.

Madison Ellis, who works at Edible Arrange is hoping Monday will be peaceful.

"We’ll probably lock this door in the morning for when the protest starts," Ellis explained. "But by the end of the day, we’ll probably unlock it.... I hope that everything goes smoothly and safely that there's no trouble."

Reverend: 'We are simply wanting peace'

Meanwhile, Higgins said prayer is the best defense for threats of possible violence.

"We are not aiming at those people who want to talk to legislators," Higgins said. "We're not trying to stop people from doing that, we are simply wanting peace and for people within Richmond to feel safe."

The Prayers and Words for Peace vigil is slated to begin at 9 a.m. at Centenary United Methodist Church at 411 E. Grace Street.

"Faith leaders representing a wide variety of faith traditions will lead us in prayer, reflection, and silence," organizers said.

“I am cognizant of the interrelatedness of all communities and states. I cannot sit idly by in Atlanta and not be concerned about what happens in Birmingham. Injustice anywhere is a threat to justice everywhere. We are caught in an inescapable network of mutuality, tied in a single garment of destiny. Whatever affects one directly, affects all indirectly.” - Rev. Dr. Martin Luther King, Jr. “Letter from a Birmingham Jail”

The words from Dr. Martin Luther King’s “Letter from a Birmingham Jail” were written at a moment of deep crisis in American democracy. Dr. King confronted the challenges of his time by courageously voicing a message of community rooted in our common humanity.

Our nation once again faces such a moment of profound crisis. Intolerance and bigotry are all on the rise, emboldened and empowered through the silence and sympathy, encouragement and incitement of too many of our leaders. And now, on the very day we set aside to honor the life and enduring legacy of Dr. King, these dark and dangerous forces threaten to converge on our city and our Commonwealth, bringing hate and violence.

In this difficult moment, and in the face of these threats, we seek to muster Dr. King’s moral courage, speaking words of fellowship and community; giving expression to a vision of a just, inclusive, and peaceful society; and joining together to perfect our city, commonwealth, and union.

In Dr. King's words, “The end is reconciliation; the end is redemption; the end is the creation of the Beloved Community. It is this type of spirit and this type of love that can transform opponents into friends.” The challenge of this moment is also the opportunity of our time, to move from enmity to harmony, from widespread division to beloved community.

Our differences are profound, the path of reconciliation is difficult; yet clearly, we are called to establish a common understanding of how to end hatred, violence, and oppression. King’s words extend an invitation to us all. In a world of arrested justice and delayed peace, we must choose to speak words of community, affirm our common humanity, and build a better world.

May we be blessed with wisdom of the divine, so that we can work together in love and justice for the sake of future generations of Virginians.