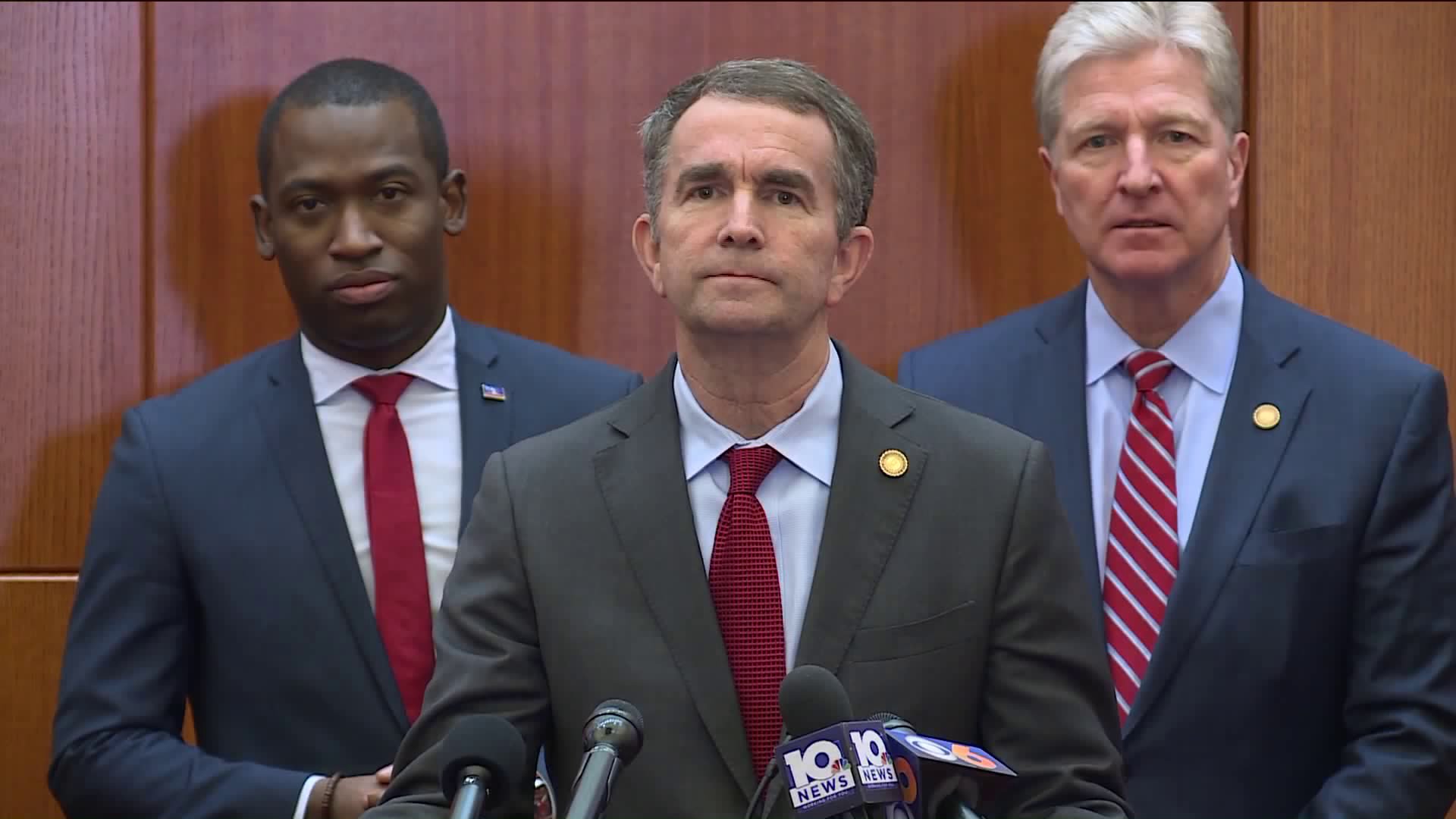 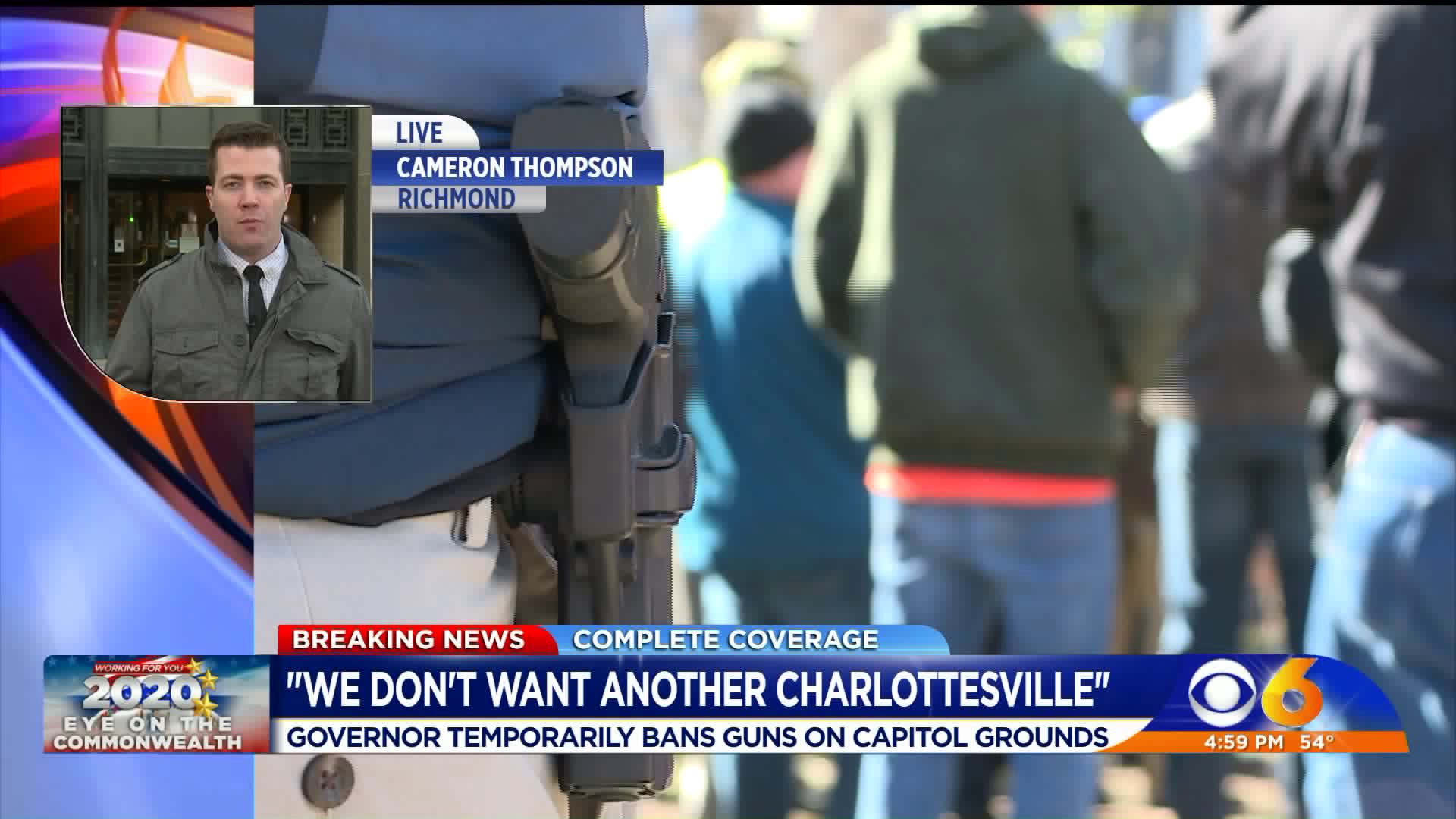 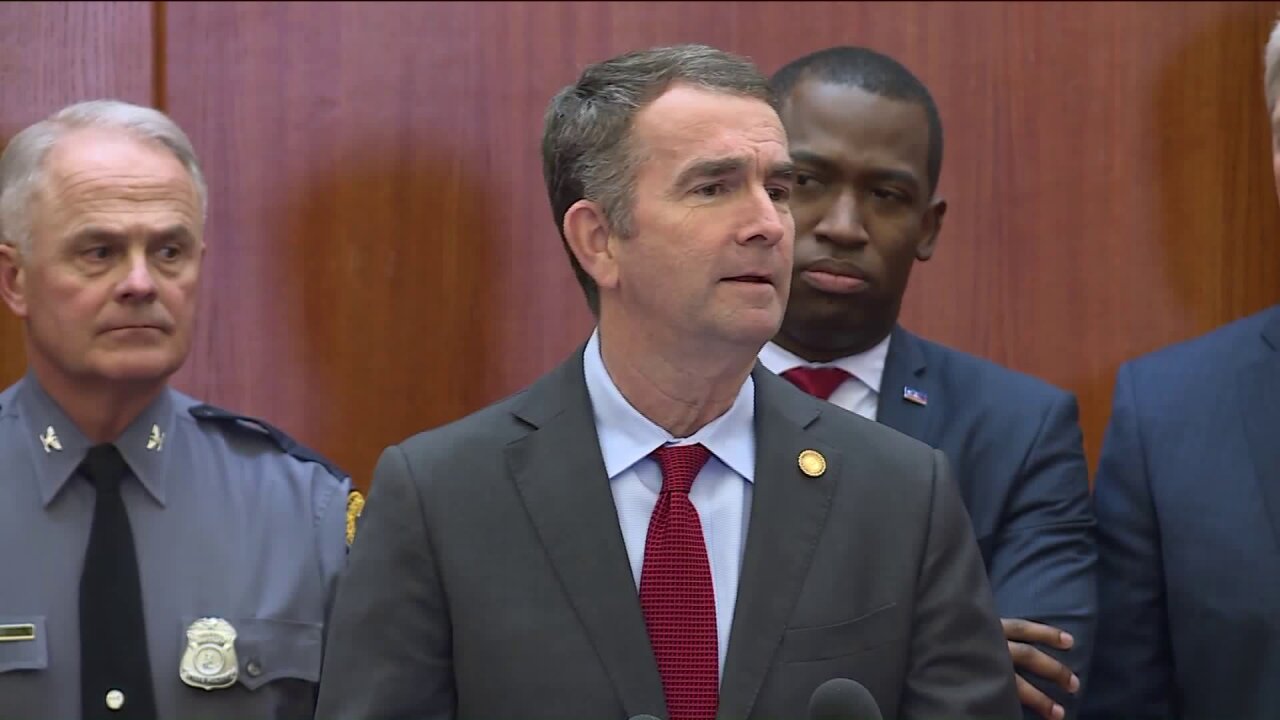 RICHMOND, Va. -- Virginia Gov. Ralph Northam will declare a temporary emergency ban on all weapons, including guns, from Capitol Square Friday through Tuesday ahead of a massive rally planned next week over gun rights.

"Based on these threats, I am declaring a state of emergency in Richmond from Friday evening until Tuesday evening. This will include a ban on weapons of any kind in Capitol Square during that time," Northam said. “These are legitimate, real threats and we are taking them seriously.”

Northam: We don't want another Charlottesville.

"Organizers of the rally have been planning this for some time and I welcome them to their Capitol and I believe they intend this to be a peaceful rally," Northam added.

Northam thanked the NRA for hosting a peaceful event Monday on NRA Lobby Day and called on the Virginia Citizens Defense League (VCDL) to hold a "peaceful event as they have done in the past."

"Unfortunately, they have released forces beyond their control," Northam said.

The governor called on the group to discourage out-of-state protesters with "violent intent" from coming to Richmond.

Settle said there will be a screening check point, similar to the process for the inauguration.

"If someone is found with a weapon at the screening they will be sent away," Settle said.

Settle stressed violence would not be tolerated.

"If you're planning that, you're not welcome here," Settle said.

"Our mission is to maintain peace and uphold the law so that people can have their say at a safe and secure environment," Settle added.

Capitol Police Chief Steve Pike temporary fencing will be installed and the only Capitol Square entrance open Monday will be at 9th and Grace streets.

Additionally, Pike said Capitol Square will close Friday at 5 p.m. It will reopen at 7 a.m. on the weekend with two access points: the northeast pedestrian gate near Patrick Henry Building and 10th and Bank Street.

In addition, Smith said some road closures on Lobby Day aim to "ensure spaces for people to assemble and exercise their rights safely."

Richmond Mayor Levar Stoney said city law enforcement has been planning for the rally for weeks with state officials.

"We will assure the right to assembly and speech while prioritizing the protection of life and property," Stoney said.

The Republican Party of Virginia (RPV) released a statement in response to Northam’s temporary state of emergency.

"Governor Northam's declaration is a direct infringement on the right of the People to keep and bear arms," said RPV Chairman Jack Wilson. "The Republican Party of Virginia condemns any and all legislation that takes aim at the Second Amendment. Northam and the rest of the Virginia Democrats have made their session goal crystal clear: a disarmed, vulnerable, and subservient citizenry."