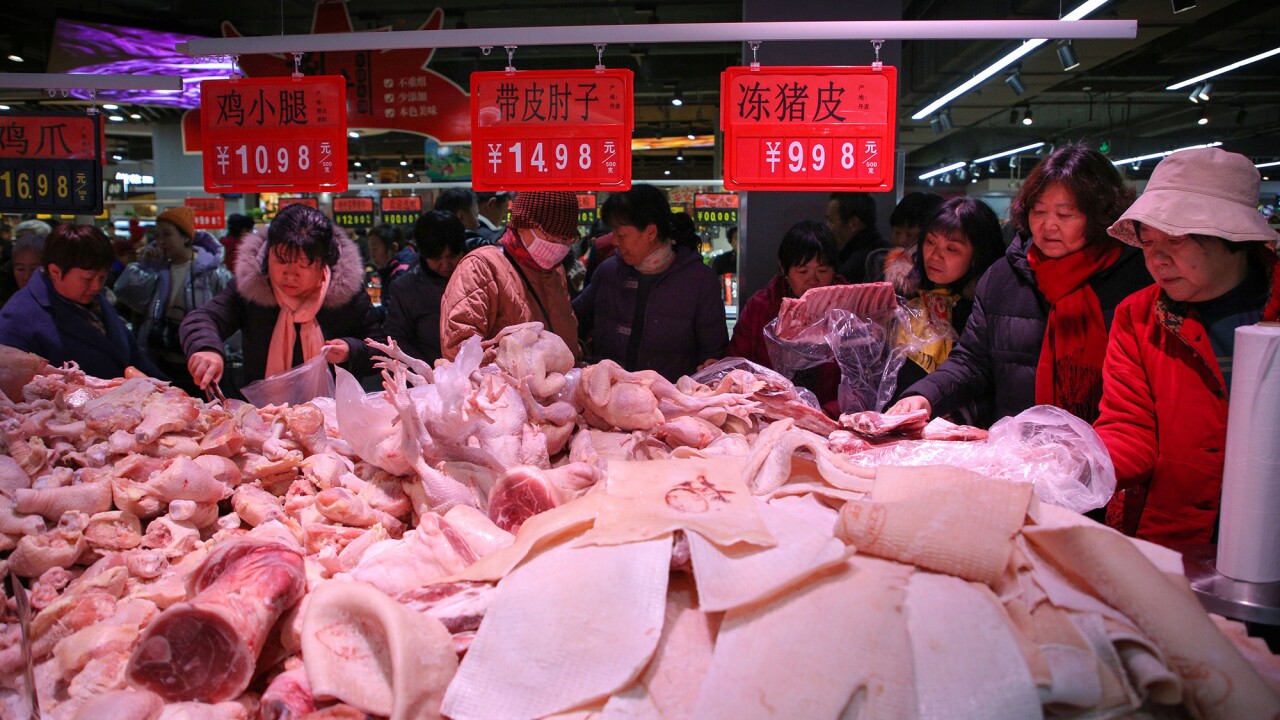 This photo taken on December 19, 2019 shows people trying to buy meat at a newly-opened supermarket in Binzhou, in China’s eastern Shandong Province. – The supermarket offered 3 tonnes of pork at discounted prices as a promotion. Pork prices in China have doubled this year following an outbreak of African swine fever. (Photo by STR / AFP) / China OUT (Photo by STR/AFP via Getty Images)

China will reduce import tariffs on hundreds of goods next week as it tries to boost trade, shore up its slowing economy and soften the impact of a devastating swine fever epidemic.

The Chinese government announced Monday that it would lower import duties on frozen pork, semiconductor parts and more than 800 other items ranging from consumer goods to high-tech products. The rollbacks begin January 1.

China’s economy has taken hits from all sides this year. Domestic demand has slowed, debt levels are mounting and the prolonged trade war with the United States continues to take its toll.

The skyrocketing price of pork — a staple of the Chinese diet — may also explain why China is easing frozen pork tariffs from 12% to 8%. African swine fever has ravaged the country’s pig farms, causing the cost of the meat to more than double last month compared to a year earlier.

Earlier this month, the spike in pork prices caused China’s consumer inflation to rise by the quickest pace in nearly eight years.

The Chinese government on Monday said that the pork tariff reductions were needed to “better meet people’s daily needs.”

China is looking at measures beyond tariff cuts as it tries to avert a sharp economic slowdown. Monday’s announcement came one day after Beijing announced 28 new measures to step up support for the country’s struggling private sector, including bigger tax cuts and easier access to bank loans. The private sector is crucial to China’s growth, but its companies face more funding difficulties than their state-owned peers.

China’s trade relationships with other countries are also a consideration. The country is still expected soon to sign a “phase one” trade deal with the United States, which is expected to include Chinese purchases of American farm products.

One analyst considered Monday’s announcement an “encouraging olive branch” as that deal moves closer toward reality. Stephen Innes, chief Asia market strategy as AxiTrader, said Beijing might be showing Washington that it wants to keep opening up its market and economy.

“It suggests that harmonious discussions continue” as the two sides wrap up “phase one” and head into “phase two” of trade negotiations, Innes added.

China’s move also suggests that the country is trying to encourage trade with other countries as it hashes out its dispute with the United States, said Alex Capri, senior fellow and lecturer at the National University of Singapore.

Capri said Beijing likely wants to increase ties in the semiconductor sector with countries like South Korea and Japan.