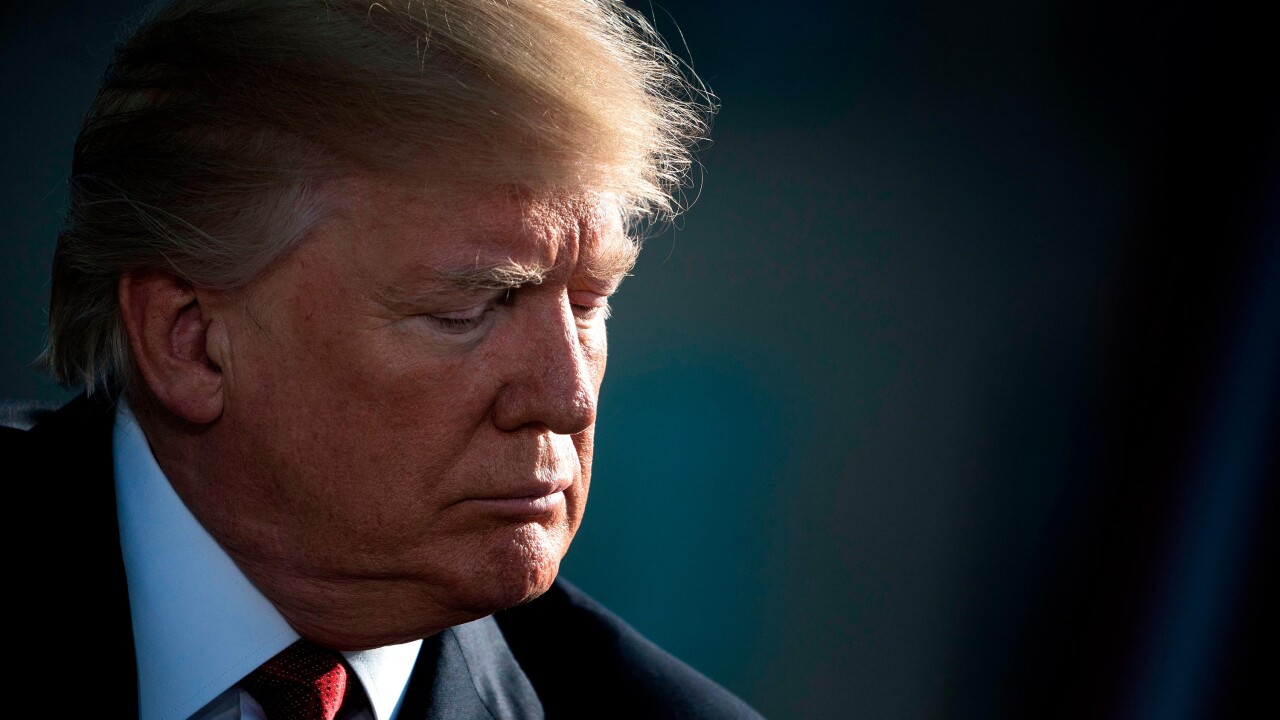 TOPSHOT – US President Donald Trump waits to speak during a memorial service at the Pentagon for the 9/11 terrorist attacks September 11, 2017 in Washington, DC. (Photo by Brendan Smialowski / AFP) (Photo credit should read BRENDAN SMIALOWSKI/AFP via Getty Images)

WASHINGTON — The deeply divided House of Representatives took the historic step to impeach President Donald Trump on Wednesday, charging a president with high crimes and misdemeanors for just the third time in American history.

The House voted almost entirely along party lines for two articles of impeachment to remove the President from office — abuse of power and obstruction of Congress — sending the case to the Senate for a trial expected to start next month.

The impeachment votes marked the culmination of a sprawling and rapidly moving three-month Democratic investigation into allegations that the President pressured Ukraine to investigate his political rivals while withholding US security assistance and a White House meeting.

The House voted 230-197 to charge Trump with abuse of power and 229-198 to charge him with obstruction of Congress. The votes were largely split along party lines: just two Democrats voted against both articles, Reps. Collin Peterson of Minnesota and Jeff Van Drew of New Jersey, who is expected to soon switch parties. A third, Rep. Jared Golden of Maine, voted for one impeachment article. Democratic Rep. Tulsi Gabbard of Hawaii, who is running for the Democratic presidential nomination, voted present for both articles.

Trump’s impeachment, which occurred 85 days after House Speaker Nancy Pelosi announced the opening of the impeachment inquiry, will have long-lasting ramifications across Washington and beyond. It will undoubtedly shape the legacies of the key players in the midst of it, from Pelosi and her committee chairs who led the impeachment proceedings to Trump and his staunchest defenders in Congress.

It’s a scenario that appeared unlikely just months ago for Pelosi, who had resisted the push for Trump’s impeachment from liberal advocates both inside her caucus and outside Capitol Hill. But then an anonymous whistleblower complaint changed the course of history for both Trump and his chief antagonist at the other end of Pennsylvania Avenue.

“We gather today under the dome of this temple of democracy to exercise one of the most solemn powers that this body can take: The impeachment of the President of the United States,” Pelosi said Wednesday to kick off the impeachment debate on the House floor. “If we do not act now we would be derelict in our duty. It is tragic that the President’s reckless actions make impeachment necessary. He gave us no choice.”

Trump now joins a small club of Presidents who have been impeached by the House for “high crimes and misdemeanors” cited in the Constitution: President Andrew Johnson in 1868 and President Bill Clinton in 1998. President Richard Nixon resigned in 1974 before impeachment proceedings against him could reach the House floor.

Both Johnson and Clinton were acquitted by the Senate, and there’s effectively zero chance the Republican-controlled Senate will remove Trump from office. But unlike Johnson and Clinton, who were impeached during their second terms, Trump will face reelection less than a year after his impeachment, giving voters the opportunity to have the final word in November 2020.

Trump has insisted he did nothing wrong in his “perfect” July call with Ukrainian President Volodymyr Zelensky, which formed the basis of the whistleblower complaint. Trump tweeted repeatedly about the impeachment proceedings against him on Wednesday as the House debate unfolded.

“The House Democrats are surrendering the majority, their dignity,” Trump said at a rally in Michigan after learning he’d officially been impeached. “They look like a bunch of fools.”

Wednesday’s vote shifts the impeachment proceedings to the Senate, where a trial is expected in January. Senate Majority Leader Mitch McConnell told Republican senators at a policy lunch Tuesday that he will announce by the end of the week the date for the start of the Senate trial, according to sources.

But Pelosi, at a news conference after the vote, would not commit to sending the articles of impeachment to the Senate, saying “that would have been our intention, but we’ll see what happens over there.”

Democrats say that Trump was impeached because he abused his office by directing a pressure campaign for Ukraine to announce an investigation into former Vice President Joe Biden and his son Hunter Biden, conditioning $400 million in US security aid and a one-on-one White House meeting on the investigation. Then Trump covered up his misconduct, Democrats say, obstructing Congress by stonewalling all the subpoenas from Congress trying to investigate his conduct.

“His conduct continues to undermine our Constitution and threaten our next election,” said House Judiciary Chairman Jerry Nadler, a New York Democrat. “His actions warrant his impeachment and demand his removal from office.”

House Intelligence Chairman Adam Schiff, a California Democrat who led the impeachment investigation, said that the President “was willing to sacrifice our national security by withholding support for a critical strategic partner at war in order to improve his reelection prospects.”

“But for the courage of someone willing to blow the whistle, he would have gotten away with it,” Schiff said. “Instead, he got caught. He tried to cheat, and he got caught.”

But congressional Republicans condemned Democrats for rushing to impeach the President, charging that Democrats pushed forward with a partisan impeachment intended to beat Trump at the ballot box in 2020.

“What we’ve seen is a process that’s led to the most partisan and least credible impeachment in the history of America,” said House Minority Leader Kevin McCarthy.

“What we’ve found here today is a president who did not do as being charged,” said Rep. Doug Collins of Georgia, the top Republican on the House Judiciary Committee. “The call itself, the two parties say no pressure. Nothing was ever done to get the money. In fact, they didn’t even know the money was held.”

The intense partisan debate over impeachment played out for hours on the House floor Wednesday on rapid-fire fashion ahead of the impeachment votes. In one-to-two minute speeches, Democrats and Republicans traded passionate arguments for why they were voting for or against impeachment. Back and forth they went: Democrats explaining the duty to impeach, followed by Republicans declaring that impeachment was a massive mistake.

Lawmakers on both sides referenced back to the Founding Fathers, to the history being made with Wednesday’s votes and to the ramifications they were leaving for their children and grandchildren.

The floor fight is the same war that the two parties have waged for the past three months in the closed-door depositions and committee hearings after Pelosi opened an impeachment inquiry on September 24.

The investigation included testimony from 17 officials, 12 of whom appeared in public hearings. They described a months-long campaign led by the President’s personal attorney Rudy Giuliani to oust former US Ambassador to Ukraine Marie Yovanovitch, followed by a push for Ukraine to announce the investigations that would benefit the President politically.

Several key officials, including acting White House chief of staff Mick Mulvaney and former national security adviser John Bolton, refused to testify. Democrats, however, chalked up the defiance of subpoenas to evidence of congressional obstruction rather than fighting in court to force witnesses to appear — a move that could have prolonged the impeachment inquiry for weeks if not months.

Leading up to Wednesday’s vote, no Republicans signaled they were considering voting to impeach the President. The looming question was whether moderate Democrats — the 31 who represented congressional districts Trump won in 2016 — would support impeachment.

One by one, almost every one of the 31 Democrats said they were compelled to vote for impeachment. Only Peterson, a veteran lawmaker from a deeply red rural Minnesota district, and Van Drew, who signaled he would soon switch parties, said they were opposed to impeachment altogether. Golden split the difference, voting for abuse of power and against obstruction of Congress.

For House Democrats, the next step to prepare for the trial is to name impeachment managers who will prosecute the case in the Senate. Wednesday’s vote also paved the way for the House to approve a resolution announcing the managers — though they aren’t likely to be named until the House sends the articles to the Senate.