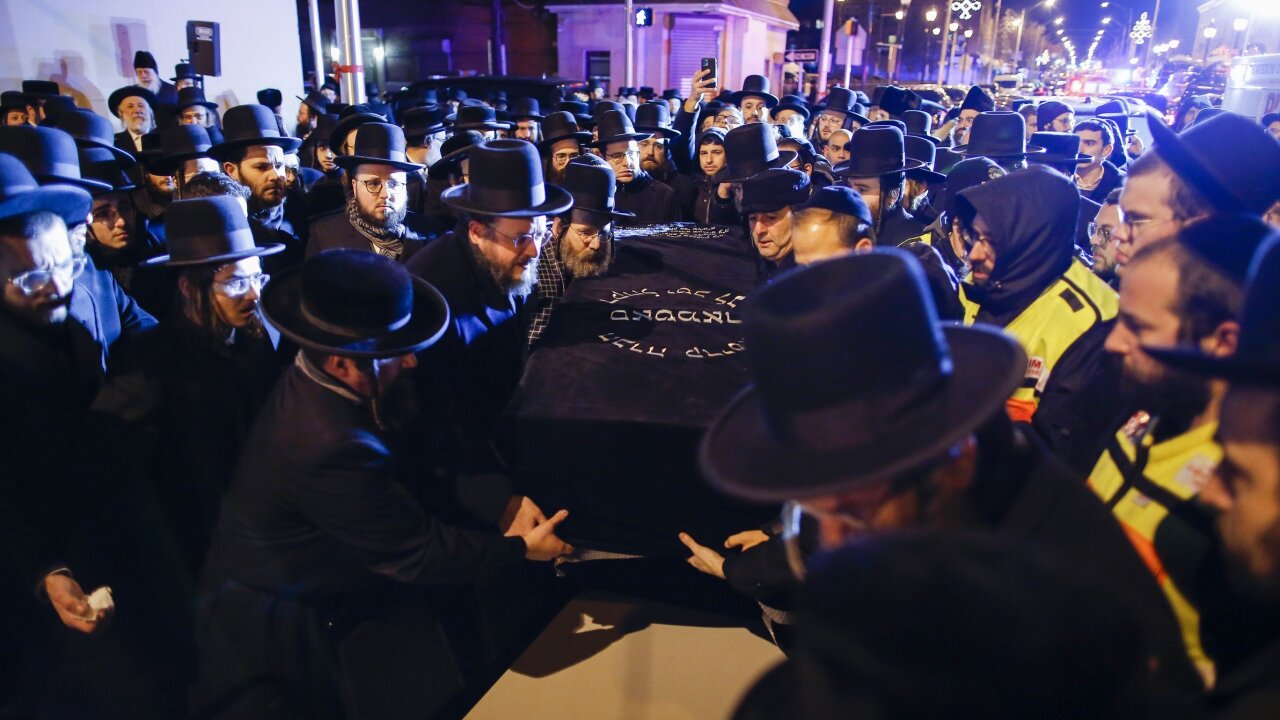 Orthodox Jewish men carry the casket with Mindel Ferencz who was killed in a kosher market that was the site of a gun battle.

JERSEY CITY, N.J. — When two shooters opened fire on a kosher supermarket in Jersey City on Tuesday, one person was able to escape.

David Lax was in the JC Kosher Supermarket, according to CNN affiliate WCBS, when the suspects, who first killed a police officer at another location, attacked the store, fatally shooting three people before engaging in an hours-long standoff with police. Lax was also shot in the attack, but made it out of the store.

He told WCBS that he could tell the duo came to kill by the way they came into the store.

“A lot of big bangs, it took me a minute to get, OK this is gunshots, and then everyone jumped on the floor,” Lax told WABC. “I dropped to the floor and then I thought, it’s over. I mean, bullets flying all over.”

Lax told the station that from the floor he could see bullets flying and black raincoats passing by. He stood up, he said, and was facing the second shooter.

“At that time, I thank God I had the courage, I had the right mind, I just re-directed her arm and ran out of the store,” Lax told the station.

Investigated as an act of terrorism

Authorities are not yet sure why the shooters — David N. Anderson, 47, and Francine Graham, 50 — attacked the officer and the store, New Jersey Attorney General Gurbir S. Grewal said. But it is being investigated as an act of terrorism with “a hate-crime bias slant.”

“We believe the suspects held views that reflected hatred of the Jewish people, as well as a hatred of law enforcement,” Grewal said, citing evidence and witness interviews.

“We’ve always had a diverse community and I think people need to realize that if anti-Semitism can exist in a place that’s accustomed to diversity, it can really exist anywhere,” Fulop told CNN’s “New Day.”

“And every day and every moment that you don’t call it out, you’re wasting an opportunity to bring attention to it because there’s less eyes focused on it.”

Both shooters expressed an interest in the Black Hebrew Israelites movement, though neither appear to have formal links to the movement, Grewal said. Some members of the movement have expressed anti-Semitic sentiments in the past.

“Our community has been terrorized once again by violent anti-Semitism,” Jonathan Greenblatt, CEO of the Anti-Defamation League, said in a statement. “From Pittsburgh to Poway, and now to Jersey City, the disease that is anti-Semitism has clearly spread to epidemic proportions.”

Investigators are checking a note found in a stolen U-Haul truck that the killers drove to the market — a note that contained both anti-Semitic and anti-police writing, a law enforcement source told CNN. Posts with similar sentiments also have been found on social media linked to the shooters, the source said.

The FBI has also issued a notice to law enforcement in the region “requesting assistance locating a vehicle associated with” Anderson.

Deadly attack began at a cemetery

Authorities have said that the attack began near a city cemetery where the shooters killed Jersey City Police Detective Joseph Seals.

He was trying to stop the shooters when he was killed, police have said.

A bystander called 911 to report Seals’ body at the cemetery at 12:38 p.m., authorities said. But by that time, the shooters had already driven the stolen U-Haul to the market and began their attack.

Surveillance video shows the pair get out, and a man — Anderson, police say — walks directly toward the store, apparently ignoring several people on the sidewalk nearby, and starts firing a gun into it before entering. Graham follows, police say.

Police arrived at the supermarket around 20 minutes after the attack began, starting a long shootout that left two police officers injured.

The shooters were armed with an AR-15-style weapon, a Mossberg 12-gauge shotgun, a 9mm Ruger semiautomatic firearm and a 9mm Glock 17, with a pipe bomb and a fifth gun in the U-Haul, Grewal said. If not for the actions of the police, they could have dome more harm, Grewal said.

Around 3:25 p.m., a police armored vehicle broke into the supermarket’s entryway, and law enforcement soon found the bodies of the three victims and two attackers inside the store, Grewal said.

The three people in the market were Mindy Ferencz, 31, the store’s co-owner; Moshe Deutsch, 24, a customer; and Douglas Miguel Rodriguez, 49, a store employee.

Store owner next door as his wife died

Two of the four victims were laid to rest Wednesday night.

In Jersey City, crowds of men in black hats surrounded Ferencz’s casket in the Jersey City neighborhood of Greenville at the site of a synagogue under construction. Hundreds of women, separated from the men as per Orthodox Jewish tradition, were standing in the bitter cold sobbing.

Ferencz owned the store with her husband, who was next door at the small synagogue at the time of the attack, according to Yossi Steinmetz who was there as well.

When shots broke out, her husband desperately tried to call her and tell her to lock the doors to take cover, Steinmetz said. She didn’t answer.

Deutsch and Ferencz both had ties to the Jewish community in the Williamsburg neighborhood of Brooklyn, New York City Mayor Bill de Blasio said.

“This is just an atrocity. Of course, we accept everything but this is more than we can handle,” Deutsch’s cousin, also named Moshe Deutsch, told CNN. “The question is, is it a sign of hatred? Is it a sign that we are not safe in New York anymore?”