ICE arrests dropped in the past year amid southern border crisis 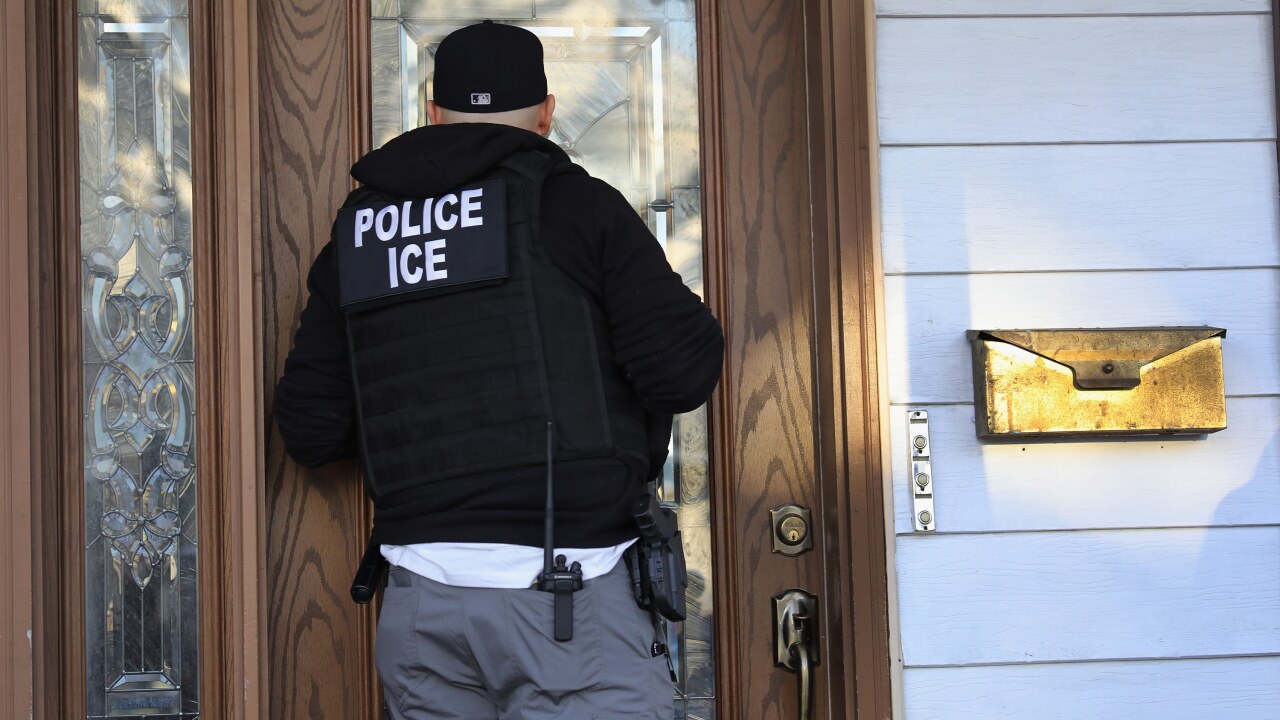 NEW YORK, NY – APRIL 11: U.S. Immigration and Customs Enforcement (ICE), officers arrive to a Flatbush Gardens home in search of an undocumented immigrant on April 11, 2018 in the Brooklyn borough of New York City. New York is considered a “sanctuary city” for undocumented immigrants, and ICE receives little or no cooperation from local law enforcement. ICE said that officers arrested 225 people for violation of immigration laws during the 6-day operation, the largest in New York City in recent years. (Photo by John Moore/Getty Images)

Immigration and Customs Enforcement arrests dropped this year as resources and attention were diverted to the surge of migrants arriving at the southern border, according to newly released data.

ICE made around 143,000 arrests in fiscal year 2019, down around 10% from nearly 159,000 arrests the previous fiscal year, which starts on October 1 and runs through September of the following year.

“What this means in real numbers and in real life and with real victims that there are 13,000 fewer criminals that we arrested this year than we arrested last year,” said acting ICE Director Matthew Albence during a press conference Wednesday.

The decline in ICE arrests is indicative of the influx of migrants arriving at the US-Mexico border this past year. According to the agency, limited resources and the volume of people who entered the United States strained ICE’s ability to arrest undocumented immigrants already living in the country.

President Donald Trump has vowed to crack down on illegal immigration, and while his administration has rolled out a series of controversial measures aimed at doing so, he also had to contend with a growing number of migrant arrivals at the southern border.

“The border crisis and the unprecedented increase in Customs and Border Protection apprehensions have required a significant resource reallocation and have made it far more challenging for ICE to carry out its vital national security and public safety missions,” said Albence.

Customs and Border Protection, a separate enforcement agency within the Department of Homeland Security, apprehended and deemed inadmissible nearly 1 million people during the government’s 2019 fiscal year. At the peak, ICE deployed hundreds of immigration officers to the border to assist ongoing efforts in the region.

As a result, the bulk of deportations conducted by ICE were of migrants who were apprehended by US Border Patrol and turned over to ICE before being sent back to their home country. According to the agency, these removals accounted for 68% of the agency’s 267,258 deportations in fiscal year 2019.

“The staggering numbers that we saw this past year will reverberate through ICE for the next decade,” said Albence.

The increase of arrests along the southern border resulted in an uptick in the number of people in immigration detention. According to ICE, 63% of the people in their custody were initially arrested by CBP, not ICE, signaling the high number of migrants at the southern border. The agency also released approximately 200,000 families from its custody due to limited detention space for families.

To that end, staffing limitations and budget constraints generally limit how many people the US can detain and deport — and how quickly that process happens. While the Trump administration has said it still focuses on criminals, there was an uptick in the number of people arrested by ICE without criminal records. Crossing the border illegally is a misdemeanor. Most ICE arrests are for civil immigration violations, not criminal offenses.

In 2016 — the last full fiscal year under President Barack Obama — ICE removed 60,318 people with criminal convictions, which was 92% of the total 65,332 interior removals.

Despite strained resources, ICE continued to execute operations targeting undocumented immigrants. Some of those efforts sparked a public outcry among advocates and lawmakers.

Over the summer, ICE arrested 35 migrants as part of an operation targeting families with court-ordered removals. The operation, which was similar to one conducted under the Obama administration, was intended to target around 2,000 migrant families who had removal orders and appeared to be part of a concerted enforcement effort to target families and unaccompanied children.

ICE removed 5,702 migrant family members who had been apprehended at the border between fiscal year 2014 and fiscal year 2019, and 6,351 unaccompanied children, according to recently released data.

Separately, ICE also ramped up its worksite enforcement. In August, US immigration authorities also detained some 680 undocumented immigrants in what a federal prosecutor described as a record-setting operation. The operation stemmed from the agency’s increased focus on immigration violations at the workplace.