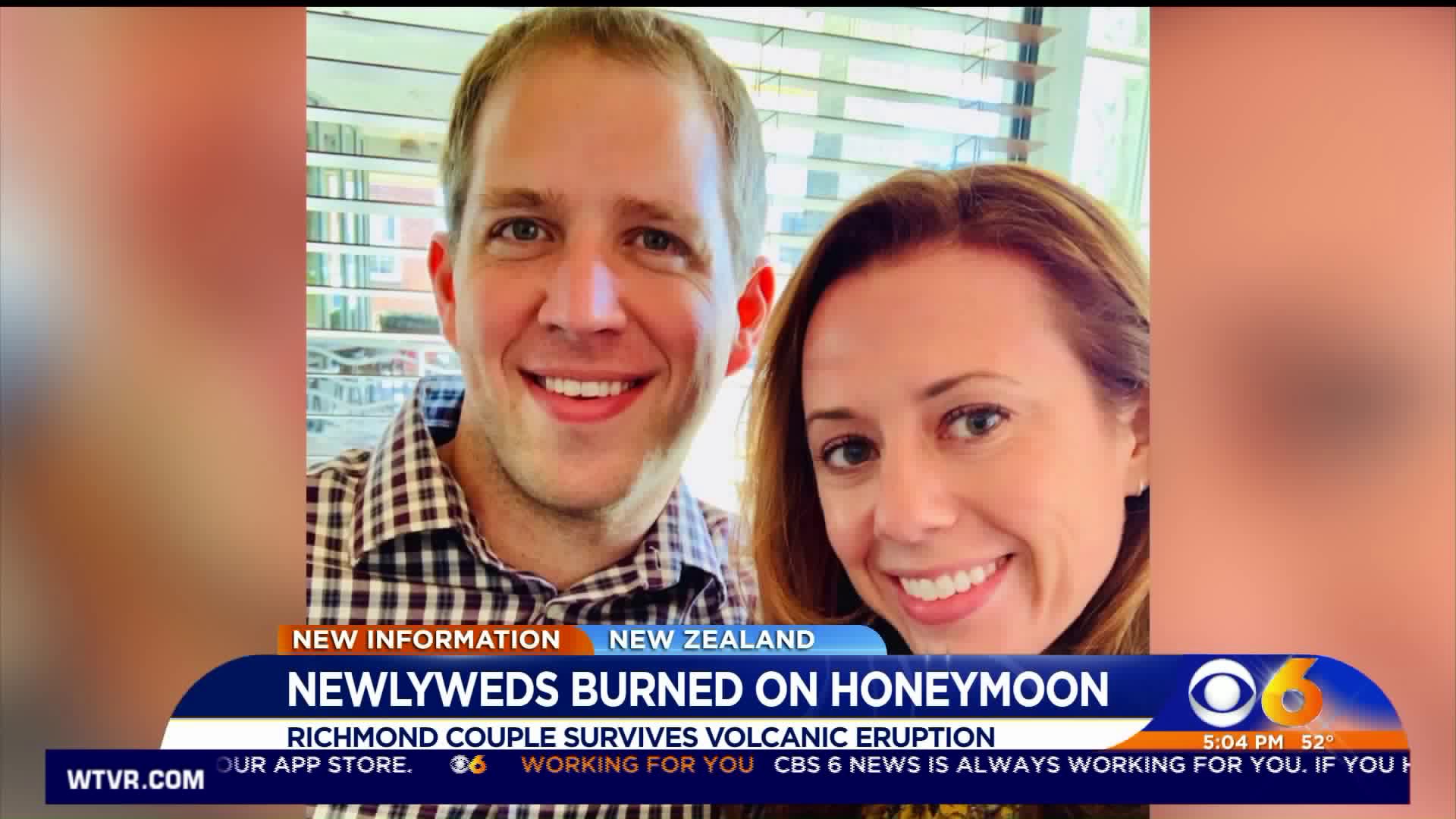 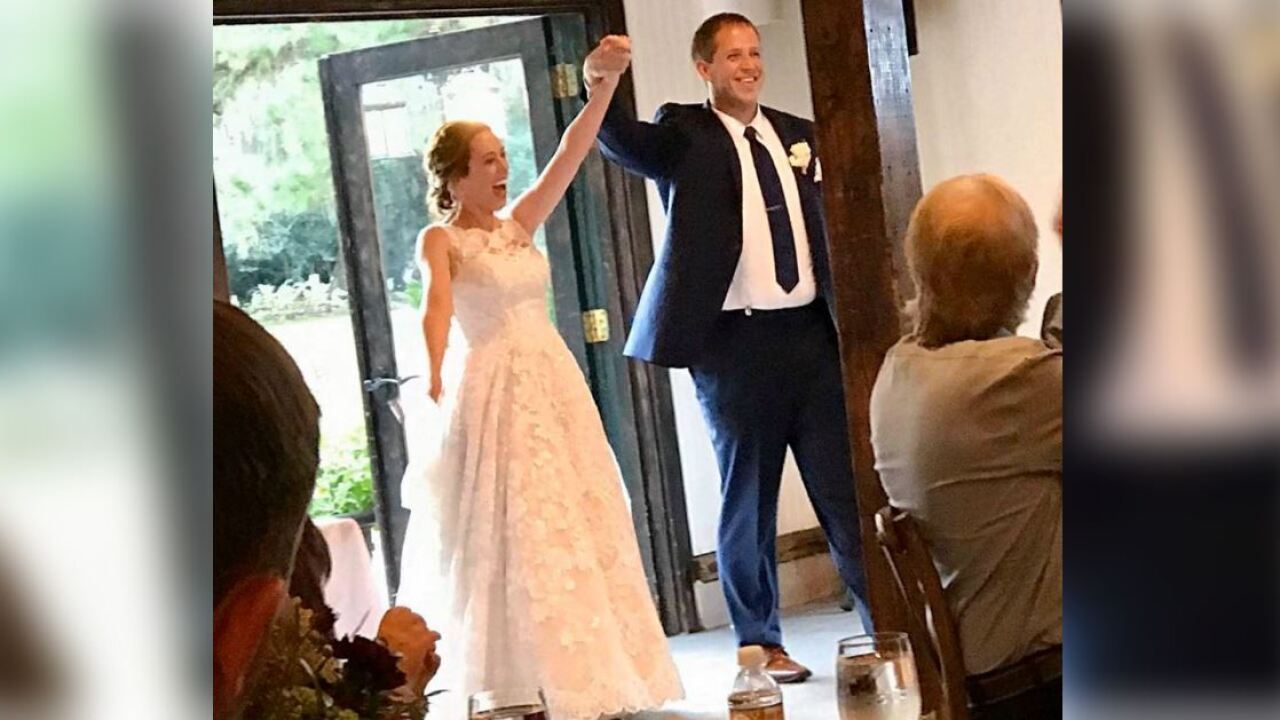 RICHMOND, Va. -- Matthew and Lauren Urey were injured Monday when a volcano erupted on White Island in New Zealand, relatives confirmed to CBS 6.

The Richmond newlyweds were on a Royal Caribbean cruise for their honeymoon.  Matthew left his family a voicemail informing them he and Lauren were both badly burned, relatives said, but their family only confirmed their whereabouts Monday afternoon local time.  Family members received a call from Royal Caribbean shortly after the voicemail asking if they had heard from either Matthew or Lauren.

Family is en route to New Zealand to be with their injured loved ones.  Bon Secours Health Systems confirms that Lauren in an employee.

Relatives said the Urey's are a "sweet couple" who are very much in love and looking forward to spending time celebrating their nuptials.

Both survived the eruption which has claimed the lives of at least five people. In addition to the five confirmed fatalities, eight people were considered missing following the eruption.

New Zealand Prime Minister Jacinda Ardern said citizens from New Zealand, Australia, the United States, the United Kingdom, China and Malaysia were among those injured and missing following the explosion. Speaking at a news conference on Tuesday morning, local time, Ardern paid tribute to the people who tried to help visitors caught up in the eruption.

"Those who undertook a risky effort in the immediate aftermath did so in an incredibly courageous way," she said.

According to New Zealand Police Superintendent Bruce Bird, 47 people were on the island at the time of the explosion. He said 31 are still in hospital, while three others have been treated and discharged.

The eruption took place with little warning Monday afternoon local time while dozens of tourists from cruise ship Ovation of the Seas were touring the volcano.

Shocking footage from tourists on nearby boats were posted on social media, which showed giant plumes of thick black smoke rising from the site.

According to a statement by New Zealand Police, there were "no signs of life" on the island early on Tuesday morning local time, after a number of aerial reconnaissance flights over White Island.

Those dead were from a group of 23 people who had been evacuated shortly after the eruption, according to New Zealand National Operation Commander Deputy Commissioner John Tims -- all of whom suffered some degree of injury.

Earlier police said at least 10 people were missing and believed to still be ashore.

"Based on the information we have, we do not believe there are any survivors on the island," the police statement said. "Police is working urgently to confirm the exact number of those who have died, further to the five confirmed deceased already."

Both New Zealanders and overseas tourists are believed to be involved; a number were from the Ovation of the Seas cruise ship, which is owned by Royal Caribbean Cruise Line.

Earlier, Tims said it was unsafe to send emergency crews to search for those missing.

"The island is unstable ... the physical environment is unsafe for us to return," Tims told reporters.

Police said in a statement that a New Zealand Defense Force ship will approach the island at first light "to further assess the environment," on Tuesday and Police Disaster Identification were awaiting deployment in the nearby port town of Whakatane.

New Zealand is located in one of the world's most tectonically-volatile regions. Vulcanologists said that while the eruption was relatively small compared to other past disasters, anyone close to the site would have been in serious danger.

Tourist Michael Schade and his family had been on the volcano just 20 minutes before it erupted. They were waiting on a boat, about to leave, when the eruption occurred.

"Boat ride home ... was indescribable," Schade wrote on Twitter. "Those are some of the people (our) boat picked up. Praying for them and their recovery. Woman my mom tended to was in critical condition but seemed strong by the end."

Casualties from a 'range of nationalities'

Initial information in the wake of the eruption was scarce, as New Zealand emergency helicopters and ambulances rushed to the town of Whakatane.

"Whakaari/White Island is erupting. More information soon," announced GeoNet in a notice on their official Twitter.

Images from cameras run by the Institute of Geological and Nuclear Sciences (GNS) of a crater on the island appeared to show a group of people inside the smoking center just minutes before the eruption.

Both locals and tourists have been caught up in the disaster, police said in a statement earlier in the day.

More than 30 tourists from the Ovation of the Seas were on White Island at the time of the eruption, New Zealand Cruise Association chief executive officer Kevin O'Sullivan told CNN.

"Our hope is that everyone will be recovered quickly and unharmed," he said. The Ovation of The Seas is one of the largest cruise vessels in the world, according to operators Royal Caribbean.

Deputy Commissioner Tims said out of the 23 people who had been evacuated from the island earlier in the day all were injured, with some suffering severe burns.

Australian Prime Minister Scott Morrison confirmed on Twitter Monday that Australians were involved in the volcanic eruption. "Australians have been caught up in this terrible event and we are working to determine their wellbeing," he wrote.

The White Island, or Whakaari volcano, is New Zealand's most active cone volcano according to the GeoNet website. It has been built up by more than 150,000 years of volcanic activity.

A cone volcano is the most immediately recognizable mountain-shaped variety, as opposed to shield volcanoes or calderas which are far more flat in shape.

White Island is also dubbed as "one of the world's most accessible active volcanoes" on a White Island Tours website, which offers ocean cruises near the island and a guided tour depending on the status of the varying volcanic alert levels.

According to the GeoNet website, more than 10,000 people visit the island every year.

The Volcanic Alert Level was raised to 4 shortly after the eruption, and the Aviation Color code is orange, according to GeoNet. Two hours later it was lowered to level 3, due to "diminished" activity in the area of the volcano.

Speaking at a news conference on Monday afternoon, GNS expert Ken Gledhill said that while the volcanic eruption hadn't been that large, it would have been hugely dangerous for anyone nearby.

"(The plume) went up 12,000 (feet) into the sky, and so on the scheme of things for volcanic eruptions, it's not large, but if you were close to that, it's not good," Gledhill said. The scientist added he couldn't predict whether there would be another eruption within 24 hours.