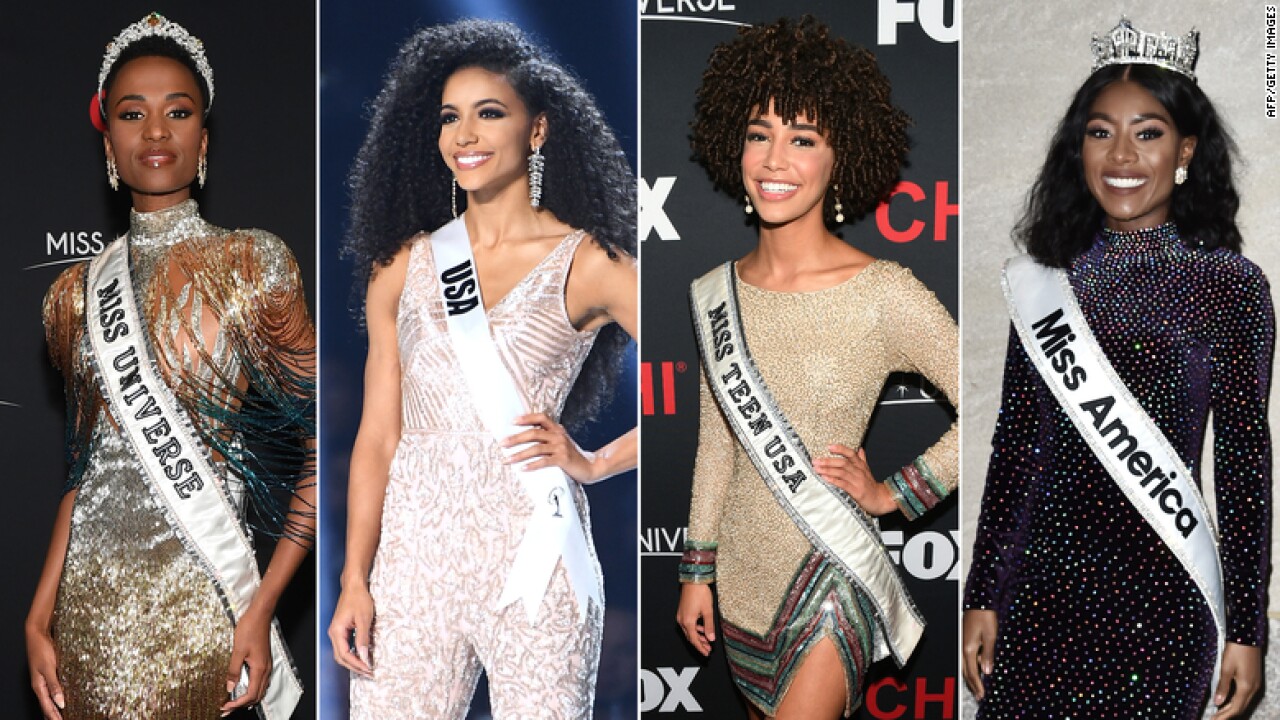 And that’s a big deal if you know pageant history.

Beauty pageants early in their histories, some dating back to the 1920s, barred women of color from participating. Even after organizations began changing their rules to accept women of all races, there was still a lingering frustration and opposition to join.

Here’s what you should know about these five women:

Miss World plans to be a doctor

Singh, 23, from Morant, Jamaica, graduated from Florida State University with degrees in psychology and women’s studies. She plans to enroll in medical school soon, according to the Miss World website.

“I will continue to be an advocate for women,” she said, after winning the Miss World Jamaica crown in September. “I believe women are the lifeblood of our community. So, I will continue to inspire and work with them, so they understand just how great their potential is.”

Tunzi hails from the town of Tsolo in the Eastern Cape of South Africa. Along with English, the 26-year-old speaks Xhosa and has launched a social media campaign against gender-based violence.

In a recent Instagram post, she called on her fellow South Africans to write love letters pledging support for women in her country.

“It is my hope that these pledges will start, and continue a conversation around gender-based violence,” Tunzi wrote. “We have to start the narration where right-thinking people act as role models for those who think it’s okay to mistreat women.”

At the Miss Universe pageant, Tunzi spoke about how conventional beauty standards haven’t typically included skin and hair like hers, encouraging women to embrace themselves and love who they are.

“I grew up in a world where a woman who looks like me — with my kind of skin and my kind of hair — was never considered to be beautiful,” she said in her last response before she was crowned. “I think it is time that that stops today. I want children to look at me and see my face and I want them to see their faces reflected in mine.”

Kryst has a law degree and MBA from Wake Forest. She also studied at the University of South Carolina.

Receiving three degrees from two universities, Kryst is a 28-year-old attorney with a mission to help reform America’s justice system.

Hailing from North Carolina, Kryst practices civil litigation for a law firm and has a passion for helping prisoners who may have been sentenced unjustly get reduced punishments, free of charge.

Kryst, who is licensed to practice in two states, earned both her law degree and MBA from Wake Forest University and completed her undergraduate work at the University of South Carolina.

In a video played during this week’s competition, Kryst told a story about how a judge at a legal competition suggested she wear a skirt instead of pants because judges prefer skirts.

“Glass ceilings can be broken wearing either a skirt or pants,” she said. “Don’t tell females to wear different clothes while you give the men substantive feedback on their legal arguments.”

Since then, she’s built a blog for women’s workwear fashion and volunteered for Dress for Success.

Garris says she feels more confident and comfortable with her naturally curly hair.

When Garris took the Miss Teen USA stage, she did it with confidence as she wore her natural hair.

“I know what I look like with straight hair, with extensions, and with my curly hair, and I feel more confident and comfortable with my natural hair,” the 18-year-old from Connecticut told Refinery29.

When she began competing in pageants, Garris said she had to fight against beauty standards suggesting that straight hair was better than her natural curls.

There were people who told her how they thought she should style her hair, she said. But she ignored their criticism and went on to win the title of Miss Connecticut Teen USA with her natural hair and then Miss Teen USA.

Franklin works with the nonprofit group Sing for Hope to help others through the power of music.

Franklin remembers what music did for her. Now she tries to inspire children in the same way.

An opera singer, Franklin discovered her identity through music, she explained during the Miss America competition in September.

“I grew up at a predominately Caucasian school, and there was only 5% minority, and I felt out of place so much because of the color of my skin,” the 23-year-old North Carolina native said. “But growing up, I found my love of arts, and through music that helped me to feel positive about myself and about who I was.”

Representing New York, Franklin showed her passion for music when she sang “Quando m’en vo'” from Puccini’s “La Bohème.” Wowing the judges, she was crowned the 2019 Miss America.

This past year, she has been an advocate for the arts. She works with Sing for Hope, a nonprofit focused on helping people, including children and artists, through the power of music.

This story was originally published in May 2019 and has been updated to reflect the results of the Miss Universe pageant.