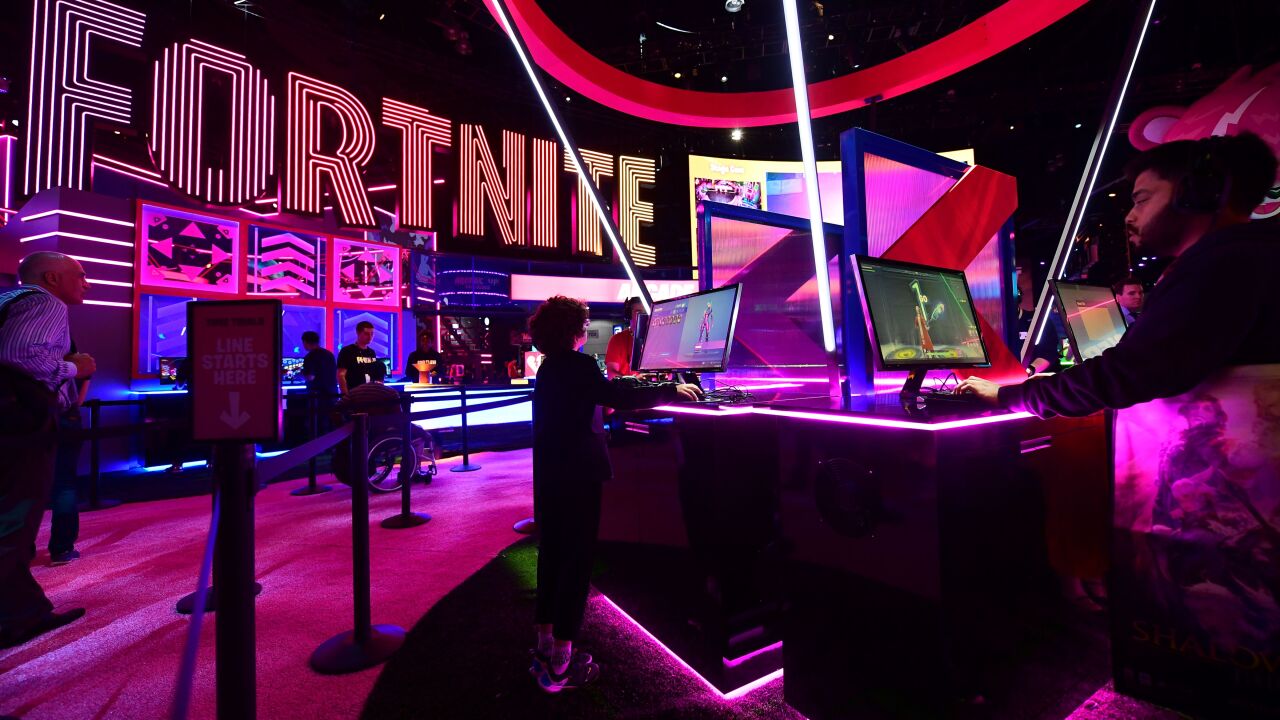 Gaming fans play “Fortnite” at the 2019 Electronic Entertainment Expo, also known as E3, opening in Los Angeles, California on June 11, 2019. – Gaming fans and developers gather, connecting thousands of the brightest, best and most innovative in the interactive entertainment industry and a chance for many to preview new games. (Photo by Frederic J. BROWN / AFP) (Photo credit should read FREDERIC J. BROWN/AFP via Getty Images)

In the age of “Fortnite,” video game companies have to make changes to the way they market and sell games.

Instead of two people jamming away on a shared home console, millions of people are starting to log into games simultaneously. Mobile gaming continues to take off. Livestreaming and esports are on the rise.

That means Nintendo, PlayStation, Xbox and the retailers they work with must adapt.

To continue growing their $152 billion industry (a number from Ernst & Young forecasts) traditional video games are experimenting with new strategies. Publishers are selling bundle deals. Digital shops like the Epic Games Store and the Steam store for PC games are running promotions. And console makers are getting into the mobile gaming business.

“The sale of games in a physical form is fading fast, with most video games now sold digitally,” said EY’s global media and entertainment lead John Harrison. Instead of offline, single-player consoles, gaming has become a service, he said. “Game developers are creating ‘live,’ long-term games.”

Free-to-play games like “Fortnite” and “World of Warcraft” have a leg up on traditional video games, because they generate revenue long after a customer downloads the game: They make money off of microtransactions such as a new look for a weapon or digital outfits.

That has helped mobile games make up the biggest slice of the video game industry pie. It’s predicted to make $68.5 billion in revenue this year, according to market analytics company Newzoo.

As physical sales give way to the digital world, retailers are getting hit the hardest. As part of its cost-saving plan, GameStop said in September it will close 180 to 200 underperforming stores by the end of this fiscal year, which ends in February 2020.

For Nintendo, the future has grown increasingly mobile. Nintendo has historically relied on its console ecosystem to sell, but it’s getting deeper into making mobile games. This year, it saw greater success with mobile titles like “Mario Kart Tour” and “Dr. Mario World.”

“The purpose of our mobile business is to expand the number of people who have access to our Nintendo IP,” Nintendo told CNN Business in a statement. “We are always exploring new ways to bring our franchises and characters into the mobile space in ways that fit that type of gaming experience.”

Nintendo also launched its own digital subscription service in September 2018, which costs $3.99 for a single month or $19.99 for 12 months. Players must pay for the service to play games together online, including the latest Pokémon titles.

“Livestreamers on Twitch and YouTube are the gatekeepers and the tastemakers, and so that extensively changes how publishers reach their target audiences,” said Dreunen.

Companies are also doubling down on their own social presence. The Pokémon Company launched a 24-livestream in October to promote the new “Pokémon Sword” and “Shield” games. Viewers were able to watch new characters appear in a mysterious, fictional forest. On average, about 25,000 people were watching the stream at any given time throughout the day.

GameStop chief merchandising officer Chris Homeister pointed out that the company was able to boost sales in early November through a Fortnite promotion. Although the game is free, retailers such as GameStop, Amazon and Target sold merchandise and gave away codes to the virtual “Fortnite Minty Pickaxe,” attracting customers who collect in-game cosmetics.

Companies are also trying to make physical copies worth buying, similar to how CDs these days may include a fan poster to boost sales. Physical copies of games can be decked out with exclusive merchandise and retail for higher than the usual price of $59.99.

For example, “Persona 5” is getting a Royal version for the PlayStation 4 next March that costs $89.99, and it will include much of the original game but with new content and collector’s items. “Gears 5,” published by Xbox Game Studios, was packaged as a Collector’s Edition retailing $269.99 for in-game cosmetics, a replica of the in-game drone and more.

And physical sales are far from done. People are still buying video game consoles. Nintendo reported December 4 that it sold over 830,000 units of the Switch and Switch Lite combined over Thanksgiving weekend, which is its “single best week of US sales in Nintendo Switch history” since its launch in March 2017.