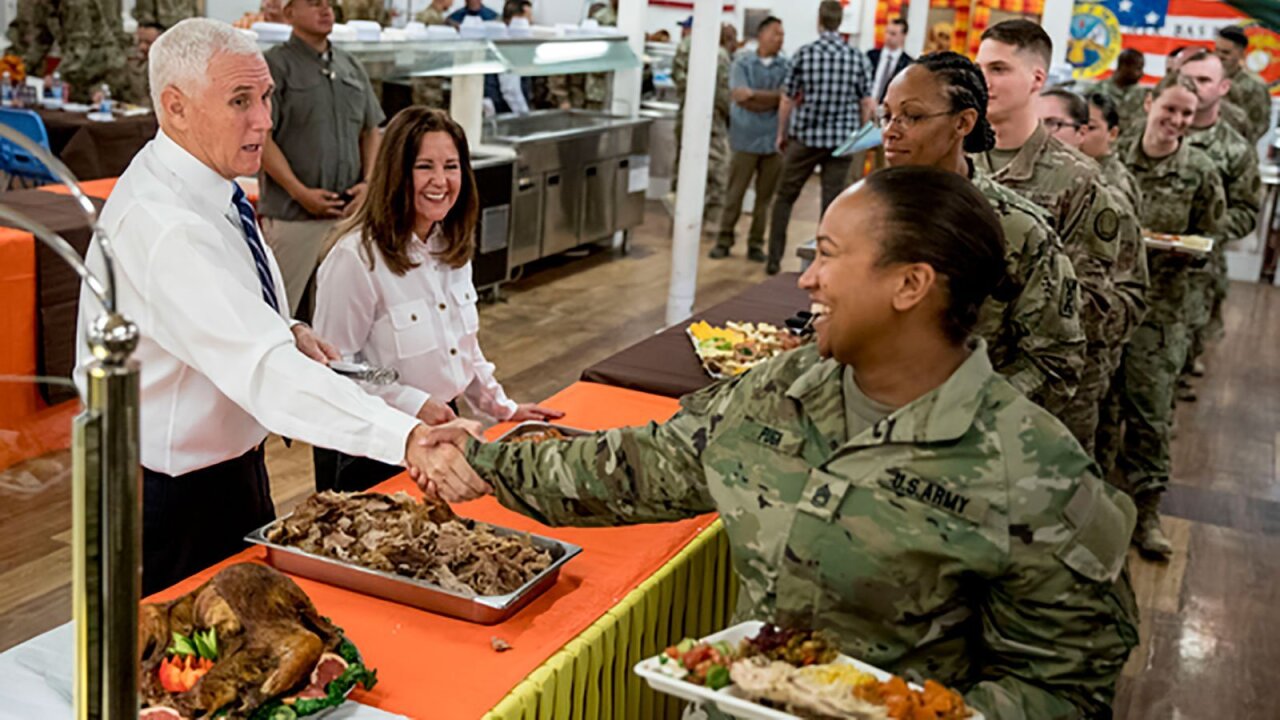 AL ASAD AIR FORCE BASE — Vice President Mike Pence on Saturday took a veiled swipe at Congress and its impeachment probe into President Donald Trump during an unannounced trip to Iraq to reaffirm the US commitment to Kurdish allies and visit US troops ahead of Thanksgiving.

On his second trip to the region in a little over a month, Pence visited the Al Asad Air Force Base in western Iraq, where he delivered remarks to roughly 150 service members. The vice president told them the Trump administration was fighting to secure a military pay raise and — without naming the House impeachment inquiry into Trump and Ukraine — attacked Congress, saying investigations have slowed lawmakers’ progress in passing legislation.

“We need Congress to do their job. My fellow Americans gathered here, the truth is Congress should have finished their work on defense appropriations months ago,” he said. “But you all know that partisan politics and endless investigations have slowed things down a bit in Washington, DC, but I’ll make you a promise: This President, this vice president, and our administration will never stop fighting until we get you, our troops, the resources you need to accomplish your mission.”

Pence also mentioned the US military raid on the compound of ISIS leader Abu Bakr al-Baghdadi, recalling the moment when he and Trump received word that the ISIS leader had been killed. The vice president recounted how he and Trump “watched in real time” from the White House Situation Room as US forces “descended on al-Baghdadi’s compound in Syria.”

“I was there when the call came in… I’ll never forget the words: 100% confidence. Jackpot. Over. Incredible,” he said to applause from the crowd.

Pence and second lady Karen Pence served the troops a Thanksgiving lunch, with the vice president serving turkey and Mrs. Pence handing out yams. As they served, the Pences greeted and shook hands with each of the service members, asking them where they are from and thanking them for their service.

The vice president also received a classified briefing from the commanding officer on the base and spoke by phone with Iraqi Prime Minister Adil Abdul Mahdi. On the call, Pence told Mahdi that he traveled to Iraq in part to “extend gratitude to the men and women (of the US military) serving in your country,” according to the TV travel pool with the vice president.

Later Saturday, Pence met with the President of the Kurdistan region of Iraq, Nechirvan Barzani, in the Iraqi city of Erbil, where the US has routinely based some US special operations forces.

Pence told Barzani he wanted to “reiterate the strong bonds forged in the fires of war between people of the United States and Kurdish people.” He also pledged “enduring commitment” to ensuring that ISIS and other terrorist cells “will not be able to grab a foothold in this region again.”

The vice president’s visit comes over a month after Trump announced a withdrawal of US forces out of northern Syria — where America was fighting alongside Kurds in the region. The decision allowed Turkey to launch a long-threatened offensive across the border into Kurdish-controlled northeastern Syria.

After backlash — including from Republican lawmakers and accusations the US was abandoning an ally — the US announced that some US troops would remain in Syria to safeguard the oil fields from ISIS.

Pence, along with Secretary of State Mike Pompeo, traveled to Turkey last month to broker a ceasefire, but Syrian Kurds and US officials say that Turkish-backed groups continue to conduct attacks.

Pence, in remarks to reporters on Saturday, assured Kurdish fighters that the United States stands with them.

“I don’t think that there was any confusion now among the leadership here in the Kurdish region that President Trump’s commitment to our allies here in Iraq as well as to those in the Syrian Defense Forces, the Kurdish forces who fought alongside us, is unchanging,” he said. “But look, President Trump is always going to look for opportunities to bring our troops home, to take these men and women out of harm’s way.”

Plans for foreign trips to war zones are typically kept secret for security reasons. Trump visited US troops in Iraq at the same US Air Force base last year around Christmas — the first trip he made to a war zone as President — and Pence traveled to Afghanistan in 2017 and paid a visit to US troops there.

Pence made his Saturday trip to Iraq amid violent anti-government protests. On Friday, ahead of his arrival, Iraqi security forces dispersed protesters on a bridge in central Baghdad, killing three people and wounding 26 others, according to security forces and activists.

More than 300 people have been killed and 15,000 injured in Iraq since the start of anti-government protests in October, according to the Iraqi Parliamentary Human Rights Committee. Protests have erupted in Baghdad and in several Shiite provinces in the south over unemployment, government corruption and the lack of basic services — such as electricity and clean water.