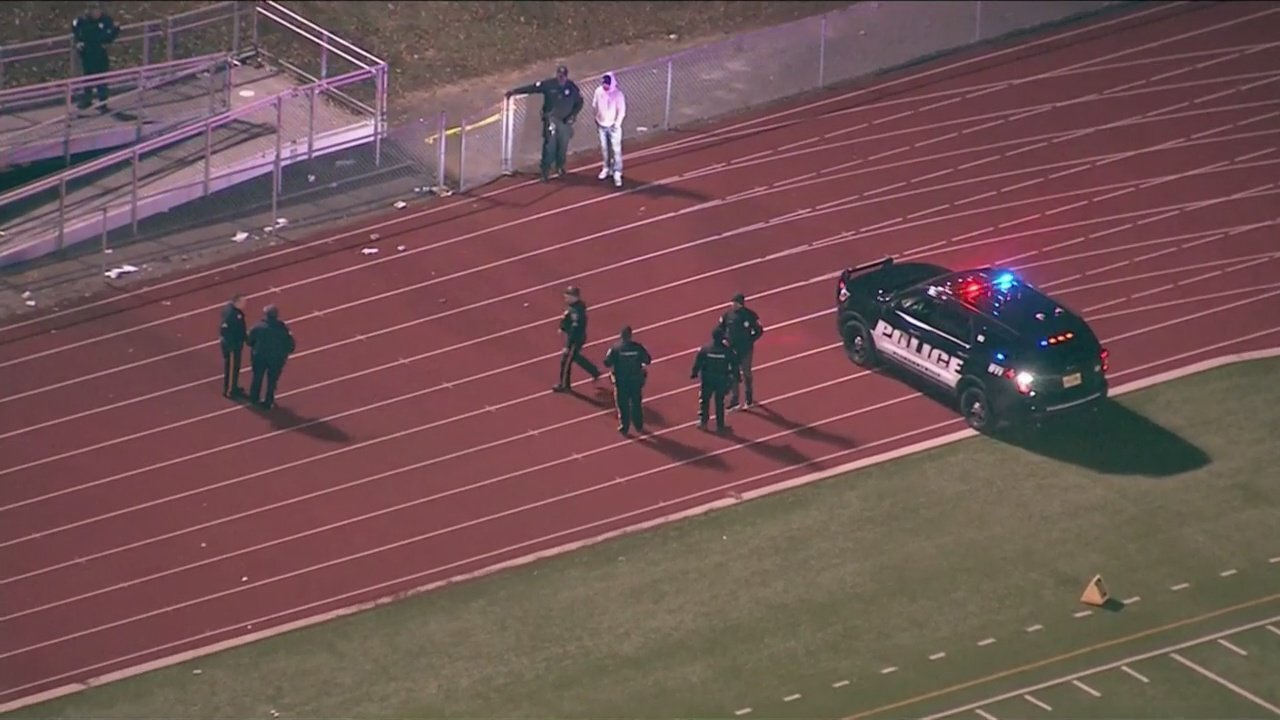 **Embargo: Philadelphia, PA ** Two people were injured when shots erupted at a high school football game in Pleasantville Friday night, officials say. There is no word on the condition or identity of the victims at this time.

PLEASANTVILLE, N.J. — cnnPolice have charged five men in connection with a shooting at a New Jersey high school football game that injured one adult and two minors.

The shooting happened during a game between Camden and Pleasantville high schools in Pleasantville, CNN affiliate WPVI-TV reported. It started at the end of the third quarter.

The adult victim, a 27-year-old man, is in stable condition and will undergo surgery, the prosecutor’s office said. A 10-year-old is in critical condition. A 15-year-old boy was released from the hospital after being treated for a graze wound.

“Unlike some of the shootings that have occurred on school premises throughout the country, this incident had nothing to do with the students of Pleasantville High School or Camden High School. The venue simply presented an opportunity for criminals to pursue their own form of petty vengeance against one another,” Atlantic County Prosecutor Damon G. Tyner said in a statement Saturday.

“As a result, an innocent child was caught and injured in their crossfire. Our community will not be held hostage by a few idiots intent on jeopardizing our safety and the safety of our children.”

Several Pleasantville players told CNN affiliate KYW-TV they initially thought the gunshots were fireworks, but once they realized what the sounds were, they ran through a fence.

“We just saw everybody from the crowd running,” Keon Henry, a senior who plays football at Pleasantville, told KYW-TV .

“Coach was telling us get down but we didn’t want to get down. We wanted to get somewhere safe inside the school, so we all ran up here, ran through the fence and then went through here.”

Video from WPVI-TV shows football players and attendees scrambling after shots rang out. People could be seen hopping fences, diving under bleachers and lying down on the field as the chaos unfolded.

Pleasantville Police Chief Sean Riggin said several police officers and administrators were at the game but did not give additional details.

Alvin Wyatt, 31, of Atlantic City is charged with three counts of attempted murder and weapons charges, Tyner’s statement said. Four other men who attended the game were charged with unlawful possession of a weapon, the statement says. They are Michael Mack, 27, Tyrell Dorn, 28, Shahid Dixon, 27, all of Atlantic City, and Vance Golden, 26, of Pleasantville.

US Sen. Cory Booker, a 2020 presidential candidate, tweeted this morning: “Horrific. Praying for everyone at this high school football game in NJ last night & the 2 people who were seriously injured by gunfire. This is not normal. When people are shot in church, schools, movie theaters & football games we need to take action to change our gun laws.”

“High school playoff football should be a cause for community celebration, not the backdrop for panic and terror,” Gov. Phil Murphy said in a statement. “I am grateful for the lifesaving swift actions of first responders to tend to the wounded, and our prayers are with the victims for a swift and full recovery.”

He added, “I am receiving updates from law enforcement as officers continue the investigation into this despicable and cowardly attack, and we support their efforts. Last night was a stark reminder that no community is immune from gun violence, and that we must not ever give up in our efforts to prevent such senseless acts.”