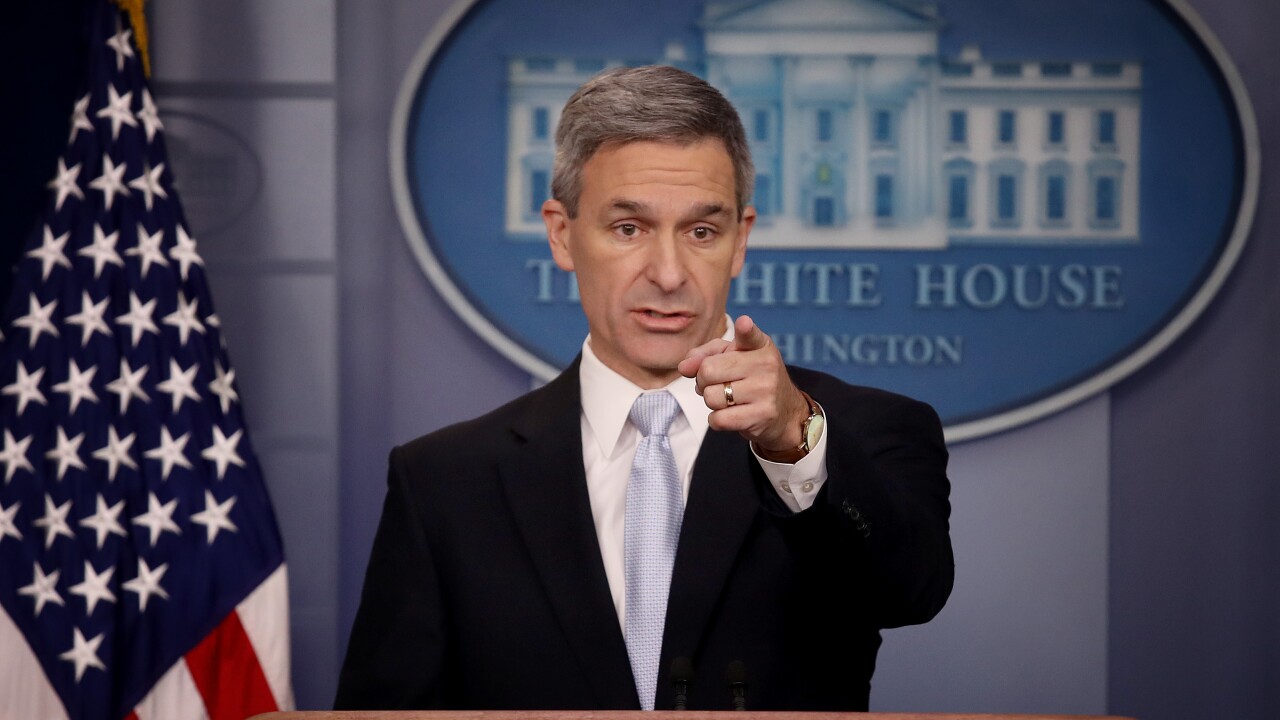 WASHINGTON, DC – AUGUST 12: Acting Director of U.S. Citizenship and Immigration Services Ken Cuccinelli speaks about immigration policy at the White House during a briefing August 12, 2019 in Washington, DC. During the briefing, Cuccinelli said that immigrants legally in the U.S. would no longer be eligible for green cards if they utilize any social programs available in the nation. (Photo by Win McNamee/Getty Images)

Ken Cuccinelli is expected to be placed in the number two post at the Department of Homeland Security by Chad Wolf, the incoming acting Homeland Security Secretary, after legal hurdles prevented the former Virginia Attorney General and gubernatorial candidate from serving in the top role, according to a source familiar with the plan.

The expected move to elevate Cuccinelli, the acting US Citizenship and Immigration Services chief and an immigration hardliner, to a higher post within the department gives him greater latitude over President Donald Trump’s signature issue. The decision to make him acting deputy DHS secretary is also indicative of how the White House views the Department of Homeland Security, which, despite its sprawling mission, has largely been tasked with executing Trump’s immigration agenda.

The placement of Cuccinelli will likely mark a big change for the deputy position, which usually handles managerial tasks, while the secretary serves as the face of immigration. That dynamic may shift with the pairing of Cuccinelli and Wolf given Cuccinelli’s bold approach to immigration.

McAleenan resigned from his post in October and is set to officially step down this week.

Wolf has had limited public exposure, but he has been at DHS since the beginning of the Trump administration, serving at the Transportation Security Administration and as chief of staff to former Homeland Security Secretary Kirstjen Nielsen. He also worked at TSA during the Bush administration.

Trump abruptly named Wolf as the incoming acting Homeland Security secretary earlier this month following weeks of speculation over who would assume the role and maneuvering within the administration to bring Cuccinelli to the fore.

The Justice Department’s Office of Legal Counsel concluded that neither of the two men were eligible because they had not served at least 90 days under the last Senate-confirmed Homeland Security secretary, who was Nielsen.

The official said Sean Doocey, the White House personnel chief, was the messenger in conveying the Justice Department’s Office of Legal Counsel’s legal opinion to the President.

While Cuccinelli isn’t acting secretary, his position as number two will be significant. As the acting head of one of the immigration agencies, he’s already brought about big changes — in some cases, surprising his own colleagues within the Department of Homeland Security.

For instance, this summer, Cuccinelli’s agency was at the center of a controversy over a change that meant some people or families dealing with serious medical conditions would no longer be able to remain in the country.

He’s also rolled out a series of policy changes, including the so-called public charge rule — one of the administration’s key immigration measures that makes it more difficult for immigrants who rely on public assistance to obtain legal status — and restrictions to asylum.