How the Donald Trump impeachment hearings will work 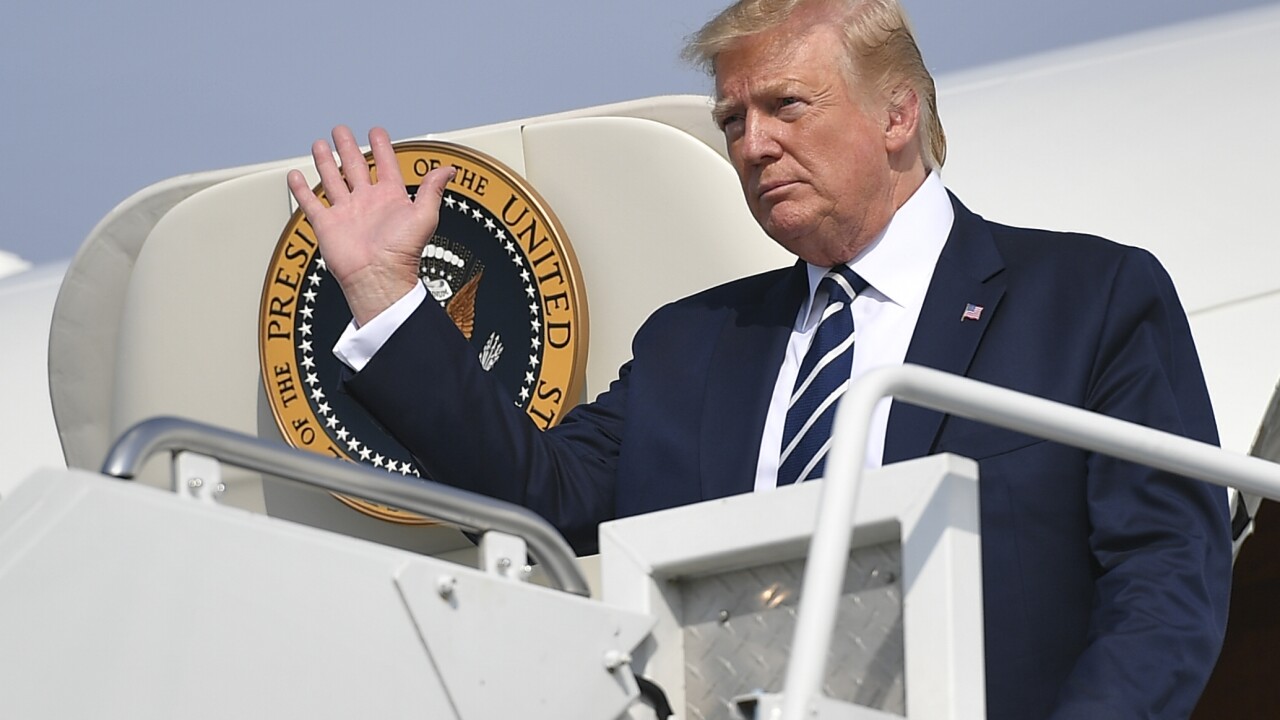 WASHINGTON — Make no mistake about it: Democrats all but acknowledge there will be a vote to impeach President Donald Trump. But this week, and the hearings that follow, mark an enormously important piece of that process. Democrats on the investigating committees make clear they already believe they have the evidence to move forward with impeachment. These hearings will serve as an effort to bring the public along with them.

Democrats are keenly aware that past hearings have gone off the rails and are doing everything they can in advance to keep that from occurring. There will be sideshows, interruptions and partisan tactics, but the ability to keep things on track — and convey to the public the information many believe already merits impeachment — is a central component of the overall strategy as they move toward articles of impeachment.

What to watch today

Answers to whether any of the GOP’s requested witnesses will be accepted. The expectation is yes, some will be — likely those who testified behind closed doors, such as former US Special Envoy to Ukraine Kurt Volker and former top NSC official Tim Morrison. But at this point that still has not been confirmed. Others — from the whistleblower to Hunter Biden — almost certainly will be rejected.

As the House comes back into session after a week-long recess, keep an eye on any detail into how Democrats and Republicans are preparing for Wednesday’s first hearing.

Along those lines, there will be a 5:30 p.m. ET House Republican conference meeting on the week ahead.

Trump announced over the weekend he planned to release the transcript of another call with Ukrainian President Volodymyr Zelensky. See below for why — and what that will mean.
Depositions. After three more transcripts were released on Monday night, there are still a handful left out there.

The Republican staff, spearheaded by the leadership, on the three committees involved in the impeachment investigation drafted an 18-page memo, based on the depositions and public reporting, that was circulated Monday night to GOP members.

The memo, obtained by CNN, lays out four central defenses of Trump, but perhaps more notably, marks the most centralized and detailed effort to lay out the Republican counterargument to impeachment that has been crafted. It underscores that with or without significant White House help, Republicans are attempting to put into place a clear line of defense, one that relies heavily, and notably, on the root of Trump’s outright disdain for Ukraine, and why that is, to some degree, exculpatory in their view.

The four primary defenses, per the memo

Of note, there are holes or omissions in various elements of the defense but the memo is detailed and clearly designed to serve as the roadmap for Republicans both on and off the Intelligence Committee as they defend the President this week.

How the hearings will work

There will be detailed tick-tocks of how each hearing will work to come in the hours ahead, but lets just start with the baseline that this will be very different than the other huge hearings of the last few years (and there have been many, though most have been memory-holed by the 9 million news cycles since).

Here’s why: the impeachment resolution lays out the structure of the hearing in a way that allows the chairman and ranking member of the House Intelligence Committee to evenly divide 90 minutes of questioning at the start of the hearing. They can take as much consecutive time as they want, so long as the other side is provided equal time out of that 90 minutes. So expect each to take 45 minutes.

While Rep. Adam Schiff, the panel’s Democratic chairman, and Rep. Devin Nunes, its ranking member, will speak and may interject from time to time, the resolution makes clear that this will be a staff-led questioning, as each member can delegate his time to counsel on the committee.

In other words, take a look at the transcripts that have been released — there’s your model for how this will work.

On the Democratic side, the opening lines of questioning will be spearheaded by Daniel Goldman, a former federal prosecutor with the Southern District of New York who joined the committee in March and led the questioning in the closed-door depositions.

On the GOP side, it will be Steve Castor, the chief investigative counsel for the House Oversight panel who has been detailed over to the House Intelligence Committee, along with his boss, Rep. Jim Jordan.

At the conclusion of 90 minutes, the rest of the panel’s members will each have five minutes to question the witnesses.

As described by several Democratic aides and lawmakers:

Paint the picture. Don’t get bogged down in the minutia or technical debates, but instead lay out, in a detailed narrative, via witnesses they believe are credible both in appearance and resume, what they say they’ve seen behind closed doors. A US government tossed on its head by outside actors serving at the behest of the President. A foreign policy and national interest made secondary to the personal whims and grudges of the White House. A series of career diplomats unsettled — or worse — by an unfolding domino effect of lies, mistruths and rogue policy decisions that undercut US interests with a close ally — and how that leads directly to the President and his pursuit of investigations into political rivals.

It’s something lawmakers and aides say they have seen repeatedly, in vivid detail, behind closed doors. Now they want to show it to the public, live and on camera.

Keep an eye on

Several Democratic aides have pointed me to Himes and his public statements/media appearances about the investigation as some of the most cogent, digestible explanations of the goals and intent behind what Democrats are looking into in the investigation.

Between the deposition transcripts and the witness requests submitted this past weekend, it’s abundantly clear where Republicans are going to go in the hearings. Aides I’ve spoken to over the past few days underscore this point. They will attempt to unearth contradictions or holes in witness testimony — and they have been poring over the transcripts of the depositions to find just those things to highlight.

They will make clear how few — if any — of the witnesses had direct conversations at all with Trump, underscoring what they believe is the key missing element of all of this: direct evidence Trump was responsible for any wrongdoing. They will also, as made clear by their witness requests, attempt to paint a picture of a country, Ukraine, rife with corruption and bad actors, something they will say underscores Trump’s alleged concern about general corruption.

High on that list: Burisma, the company that hired Hunter Biden to serve on its board, will come up repeatedly in that context.

Keep an eye on

He could have been Trump’s Director of National Intelligence. After withdrawing from consideration for that post, he instead finds himself at the center of the impeachment inquiry. GOP aides have pointed to various parts of his questioning of witnesses in the deposition transcripts as areas they expect to delve into in the hearings ahead.

One voice that won’t be physically present at the hearings is Rep. Lee Zeldin, a New York Republican who has been one of Trump’s sharpest defenders, both inside and outside the depositions. He doesn’t serve on Intelligence, a fact that has frustrated some Trump allies. But expect him to be deployed repeatedly after the hearings in media appearances, as Republicans viewed some of his exchanges in the depositions as some of their strongest points.

As it stands, there are zero House Republicans who appear ready to vote to impeach the President. As it stands, there are nowhere near 20 Senate Republicans ready to vote to remove the President. Some Republicans vent regularly about the position they are currently in, but that isn’t a public statement supporting Democrats and the furthest thing from a vote doing the same thing. Just keep that as a baseline in the weeks ahead. If that starts to shift in any way, that’s a big deal. But it’s simply not happening right now.

For some bizarre reason, Trump continues to tweet about “doctored” transcripts being released by Schiff and Democrats. This is false. Period. So false in fact that zero of Trump’s allies have picked up this line of attack. In fact, numerous GOP members of the committees involved in the depositions have been tweeting out specific portions of the transcripts that they say highlight their defense of the President — and that they say poke holes in Democratic allegations. The transcripts are not doctored. If anything, there are fewer redactions than some expected, multiple aides acknowledge.

One more point on this

As mentioned above, aides say Republicans have been scouring the transcripts for possible holes or misstatements to use as they cross-examine the witnesses at the forthcoming public hearings. The transcripts are not altered. To say otherwise is a lie.

Speaking of, about that ‘second call’ transcript

Trump over the weekend told reporters he was prepared to release the transcript of another call with Ukraine’s President — one that took place before the July 25 call that has been at the center of the current impeachment inquiry. While we haven’t seen that call yet, based on at least one of the transcripts released, it would make sense that the White House would want that call out. By the account of one key witness — a witness that brought concerns about the July 25 call to White House lawyers — it was a very positive call for the relationship. So positive, in fact, that people were high-fiving upon its completion.

“You know, the April 21st call is notable in my mind because it was actually a very good caII. It was exactly what we had — we were hoping for. So I don’t, frankly — I’m sure I had to — actually, now that I think about it, I do recall reviewing that transcript, but there was nothing normal, it was just — everybody was happy, high-fiving from that call because we were moving in the right direction for Ukraine. I did review the transcript for that one.”

One final thing that’s bouncing around

I’ve had aides from both parties wonder aloud about this in recent days: why don’t Democrats wait to get a ruling on whether former national security adviser John Bolton, or now even acting chief of staff Mick Mulvaney, should be forced to comply with subpoenas? The biggest unanswered question still outstanding is what the exact role was that Trump played in crafting the — to use a term from the depositions — “deliverable” of a public statement from Ukraine related to investigations into political rivals in exchange for a White House meeting or the release of the US security assistance. Bolton — and based on the depositions, certainly Mulvaney — would have visibility into that that simply doesn’t exist elsewhere.

Democrats have made clear repeatedly they aren’t going to play “rope-a-dope” with the White House in the courts. The timeline is clearly set up, as Jeremy and Manu Raju have reported, to hold a vote on articles of impeachment before Christmas. Waiting for Bolton and/or Mulvaney would disrupt that, and it’s unclear for how long. On top of that, it’s unclear given Mulvaney’s role how much, if anything, he would say, and Bolton, as one aide told me, “has made a career of slicing and dicing lawmakers in public hearings,” so there’s perhaps some necessary trepidation on that front for both parties. But it’s hard to imagine two more important potential witnesses than one, or both, of those individuals.