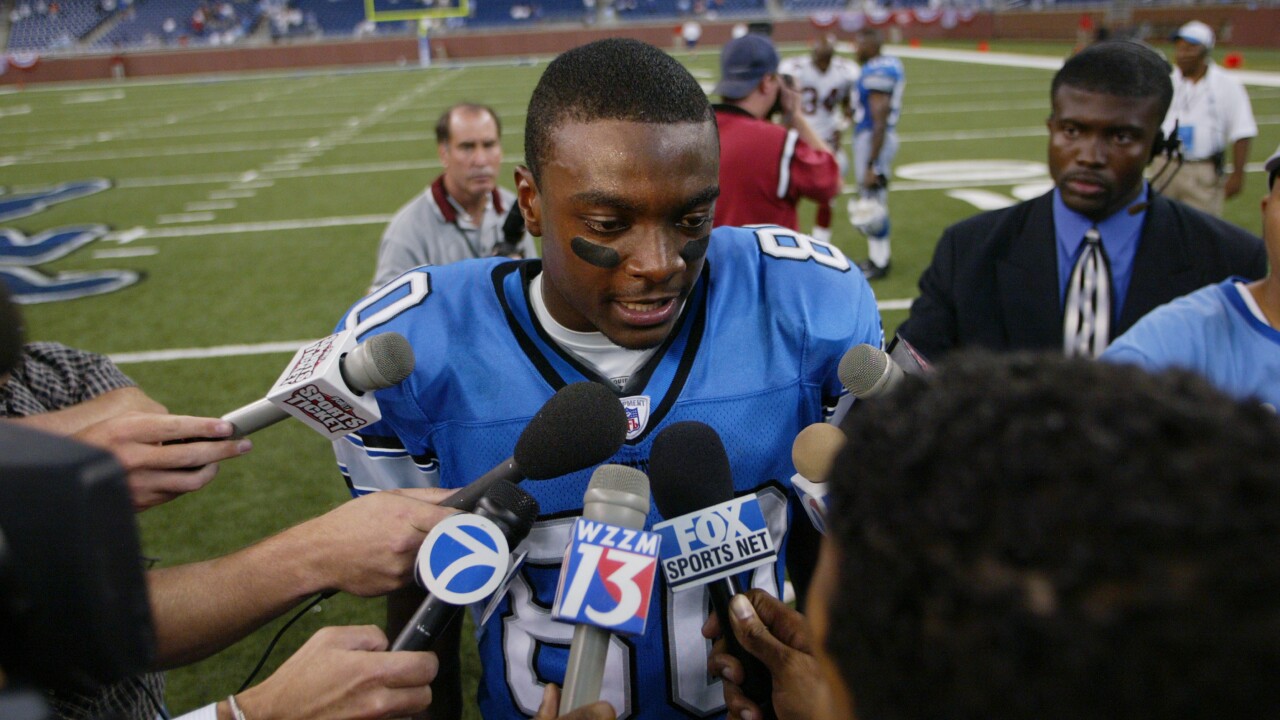 DETROIT, MI – SEPTEMBER 7: Wide receiver Charles Rogers #80 of the Detroit Lions talks to the press after the game against the Arizona Cardinals at Ford Field on September 7, 2003 in Detroit, Michigan. The Lions defeated the Cardinals 42-24. (Photo by Danny Moloshok/Getty Images)

DETROIT, MI – SEPTEMBER 7: Wide receiver Charles Rogers #80 of the Detroit Lions talks to the press after the game against the Arizona Cardinals at Ford Field on September 7, 2003 in Detroit, Michigan. The Lions defeated the Cardinals 42-24. (Photo by Danny Moloshok/Getty Images)

Former Michigan State University and Detroit Lions wide receiver Charles Rogers, 38, has died. A spokesman for Michigan State confirmed Rogers’ death to CNN, but did not say how he died.

Rogers is Michigan State’s all-time leader in touchdown catches with 27, and he ranks third in school history with 2,281 receiving yards. He won the 2002 Biletnikoff Award, which is awarded to the best receiver in college football, after he caught 68 passes for 1,351 yards and 13 touchdowns as a junior.

“Charles Rogers was a gifted young man,” Spartan wide receivers coach Don Treadwell said in a statement. “He had the total package as a premiere wide receiver with size, speed and range, topped with an awesome competitive spirit, yet he was humble off the field. It was a privilege to have coached him. He’s a great Spartan warrior who will be deeply missed.”

Selected by the Detroit Lions with the No. 2 overall pick in the 2003 NFL draft, Rogers never realized his full potential as he battled injuries and substance abuse issues during his short stint in the NFL.

By 2006, Rogers was cut by the Lions and never played in the NFL again.

“We are deeply saddened to learn of the passing of Charles Rogers. From Saginaw, to East Lansing, to Detroit, Charles’ connection to the state of Michigan and its football community was felt by many during the course of his life. We extend our heartfelt sympathies and condolences to his friends and family during this difficult time,” the Detroit Lions said in a statement.