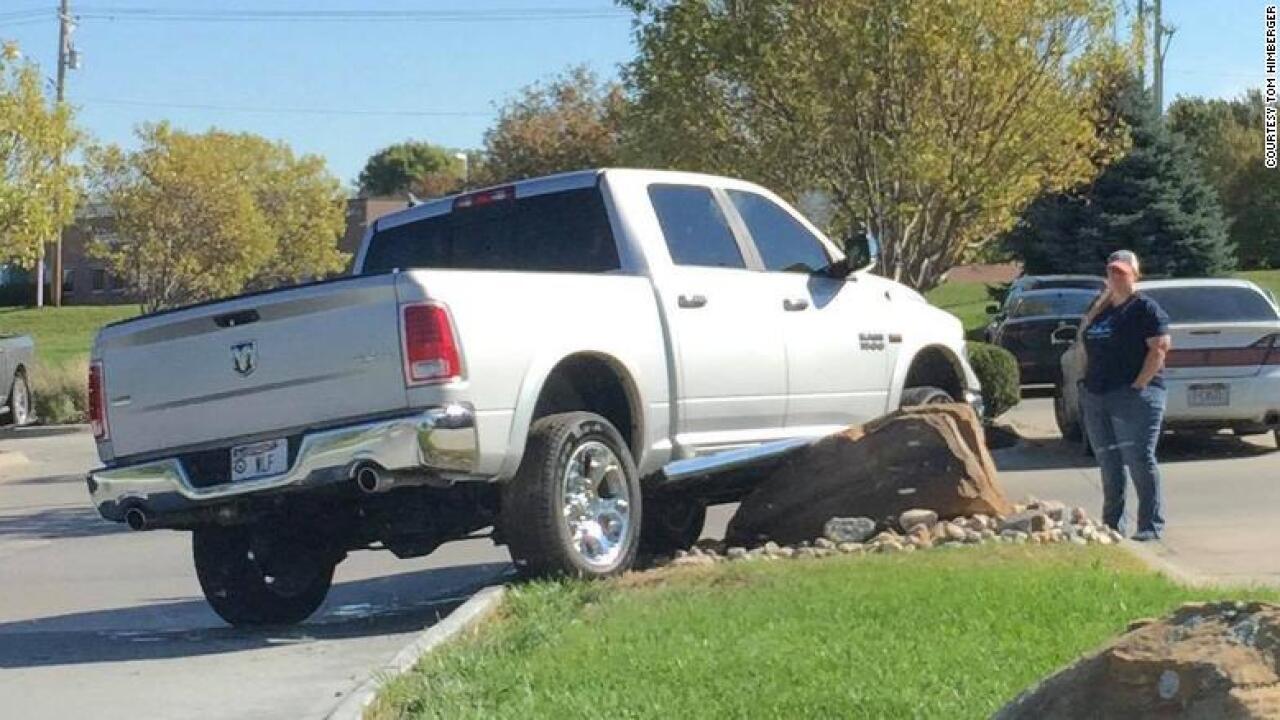 A boulder has become a bit of a rock star in Nebraska after an untold number of vehicles crashed on top of it recently, sparking an unexpected fan base.

The rock, which rests inconspicuously in a parking lot median at N 156th St., has become Omaha’s hottest new tourist attraction thanks to a vibrant Facebook group, Reddit community, and a 5-star Google Maps rating that features photos of cars, trucks, and SUVs wedged on its perch.

“I personally think it’s one of those things that everybody gets a chuckle out of,” said Facebook fan Matt Roberts. He was on his lunch break on Monday when he drove by and saw a hopeless black SUV.

“There’s a lot of division and anger in the country and this is just a random thing that is amusing to most people regardless of any other politics,” he explained of its appeal.

At least one tow truck company in Omaha has visited the rock a half dozen times over the past six weeks to assist vehicles who have struck it.

Over the past six weeks, Arrow Towing has responded to at least six calls of vehicles that have crashed into the rock, manager Steve Rains told CNN.

“The Omaha–Council Bluffs metropolitan area has a very eclectic art environment. A lot of places use boulders to decorate at their curb areas,” Rains said. “People just seem to like them. Some of it could be traffic control.”

While Rains was unsure why these accidents continue to happen, the Reddit group’s top user Rob “gallowboob” Allam attributes its viral success to driver impatience. The site’s forum, known as r/omaharock, has hundreds of followers discussing news articles of the boulder’s new found fame and related memes, like one illustration of the rock inspired by President Obama’s “Hope” poster.

“The internet loves a good justice story, especially when it comes down to petty crimes being brought to light, like jumping a curb to gain three seconds on your day and instead finding yourself stuck on top of a rock for half a day,” Allam told CNN over Twitter, explaining the boulder’s appeal.

“The beauty here is that 99% of the cars that got stuck on it have the exact same ‘pose’ in the photos, and it’s just comedy at the expense of people’s laziness and lack of attention, thinking they are smarter than… a rock.”

The rock in Omaha has become a popular spot for people to take photos for social media.

A Facebook group called “The W Maple Omaha Rock” was started on October 21. The group, which has named the boulder “Rocko,” has more than 20,000 followers who have populated it with memes and selfies taken with it.

One person who posed with the rock was Caitrin Shirazi, who works in event planning and entertainment.

“I think there are a number of reasons why this rock, and the situation around it, are gaining so much traction. First, and foremost, it’s hilarious,” Shirazi told CNN through Facebook.

“The whole point of the boulder is to make the curb it sits on more visible, so people stop running it over. You see big rocks that serve the same purpose all over town. For some reason, the people who frequent this area just can’t seem to get it.”