Journalists at ground zero on 9/11 have been getting sick. But there is help 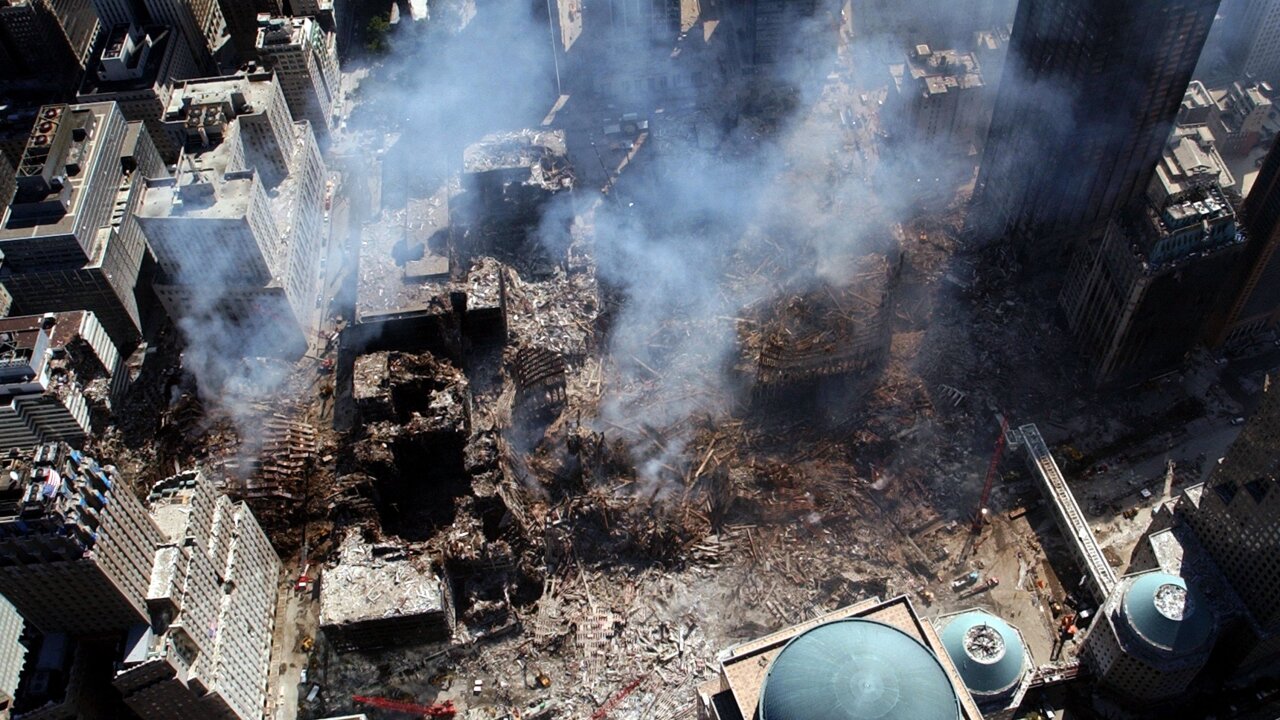 An aerial view shows only a small portion of the crime scene where the World Trade Center collapsed following the September 11, 2011 terrorist attack. Surrounding buildings were heavily damaged by the debris and massive force of the falling twin towers. Clean-up efforts are expected to continue for months.

They covered the 9/11 attacks at ground zero. They breathed in the dust and debris. Now they have cancer. And they want other journalists to know that compensation and insurance is available for those who need it.

“As a journalist, the main motive is just to get the story, get those pictures, never thinking years later you’re going to end up dying from it,” said Bruce David Martin, a former news operation manager and photojournalist for WWOR-TV.

“We had a job to do,” said Vincent Novak, who was working at NBC at the time of the attack.

Martin and Novak spoke with CNN Business to spread the word that the 9/11 Victim Compensation Fund‎ and the World Trade Center Health Program are available for members of the media who covered the terrorist attack.

“I hesitated contacting the fund, because we weren’t there to save lives,” Novak said. “But the media did do a service, by showing the actuality of the events and that there were no more attacks. We helped the public to cope.”

Novak and Martin’s applications for the Victims Compensation Fund were handled by Michael Barasch, a managing partner at Barasch & McGarry, a law firm that serves survivors of 9/11. “My law firm alone represents 53 journalists,” including newspaper journalists, TV reporters, and photojournalists, Barasch said.

Members of the media are considered responders, he said, since they were on the scene with the first responders. “They were breathing the same toxic dust as the New York City firefighters and cops,” he pointed out.

Barasch estimates that thousands of journalists — now scattered all around the world — might need to know about the available programs. To qualify for the WTC Health Fund and the Victims Compensation Fund, he said journalists need two people who can vouch for them by signing an affidavit that essentially says “This person was down there covering 9/11.” But those signatures are harder to come by as time passes, Barasch said.

“The challenge is proving you were there, and every day, witnesses are dying,” he said.

But thanks to recent lobbying by 9/11 survivors and comedian and activist Jon Stewart, the Victim Compensation Fund has been extended through 2090.

Novak completed the process of applying for the fund just last week. He received a letter confirming his eligibility on Saturday.

Speaking on Sunday’s “Reliable Sources” on CNN, Novak said the process took about a year and a half, and “it’s a relief knowing that it’s finished.”

In interviews, both Martin and Novak said that it’s not primarily about the money for them.

“It’s about being recognized for being down there,” Novak said.

“I just want everybody to know that… they could still be helped by the Victim Compensation Fund,” Martin said.

Martin, 65, has liposarcoma, a rare form of cancer.

He always kept a video camera in his apartment, so on the morning of 9/11 he started walking from his West Village apartment toward the Twin Towers.

“I did interviews and eventually found myself walking into the white dust,” he recalled. “At that point, you’re just not thinking about it and what’s going to happen later.”

During a routine exam in 2008, Martin’s doctor discovered a tumor in his abdomen. That was the beginning of a decade-long medical ordeal. Martin said he is now in the “final stages” of the disease.

The compensation fund and the health program do not have specific data about how many members of the media have enrolled.

Nor is there an official count of how many journalists have already died after being exposed to the dust and debris.

Kastenbaum wrote on Facebook that Gittelman “developed a cancer that ravaged his body as a result of covering the terrorist attacks & the aftermath for many weeks afterwards from a vantage point near Ground Zero. For helping to tell the story to the world, he paid the ultimate price. We will miss Mike greatly.”

Novak said he is also aware of several co-workers who have died from illnesses linked to 9/11.

Novak, 71, worked at NBC for more than 25 years. He worked as an electronic journalism editor and later moved to the satellite department.

He recalled being told by the authorities that “the air was okay even though it looked bad, smelled bad and tasted bad. You could taste the metallic taste of the dust. We were breathing that air in for a couple of weeks.”

Novak now has prostate cancer. He said his PSA level first went up in 2012 or 2013, but he didn’t take immediate action because his wife Elizabeth Sweetnam, an editor for “60 Minutes,” had breast cancer.

“We had to deal with once cancer at a time,” he said.

Sweetnam died in 2014. “We lived on Canal Street and I have to wonder if the air we were breathing in didn’t cause her cancer as well. Our AC was covered in the white dust,” he said.

Novak later had a prostate biopsy that showed the cancer.

“Without my telling the doctor I had been at ground zero, in 2016 he told me the first cancer cell probably showed up 15 years earlier, which would be 2001. I found that pretty amazing,” Novak said.

Novak said his cancer is contained at the moment. He called his status “active surveillance.” His union encouraged him to sign up for the compensation fund and set an example for others.

Novak said he understands that some members of the media “feel guilty doing so because you’re not a cop or a fireman… but as people were leaving the area, we were going in, so I think they should take advantage of the compensation they deserve.”

Martin made a similar point.

That terrible day, he said, “all I was thinking about was getting the shot. Journalists head toward the news story and that’s what I did that day. That was my instinct. I never thought I should be running away.”