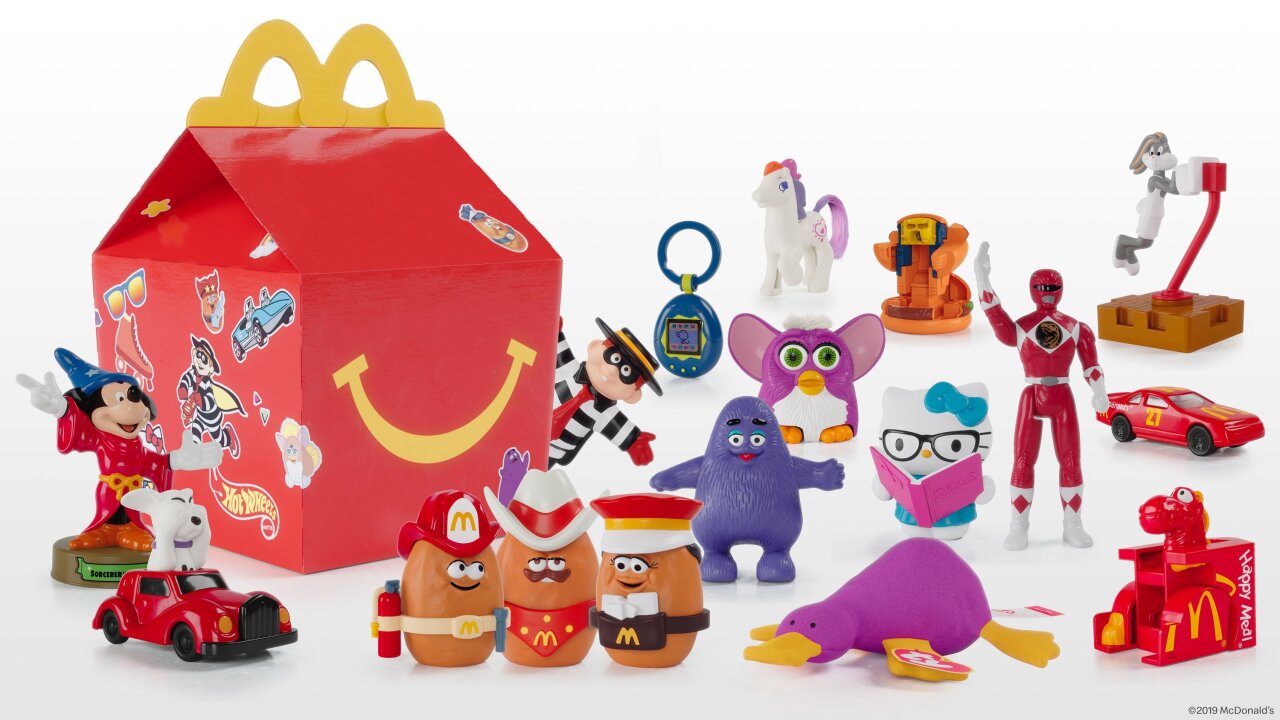 Some of the Happy Meal toys McDonald’s is bringing back for a limited time.

Some of the Happy Meal toys McDonald’s is bringing back for a limited time.

McDonald’s Happy Meal might be for kids, but officially it’s over the hill.

This year marks the 40th anniversary of the company’s first Happy Meal, the kids meal that helped McDonald’s achieve fast food supremacy. Today, roughly one in every four orders at McDonald’s includes a Happy Meal, according to retail data tracker Sense360.

Each Happy Meal contains the option of a hamburger or chicken nuggets, a side like french fries and a drink. And a toy, some of which have become collector’s items.

McDonald’s is celebrating this milestone by re-releasing some of its most popular toys over the past four decades, including Ty Beanie Babies’ Patti the Platypus and the Tamagotchi. Between November 7 through 11, McDonald’s will sell a “Surprise Happy Meal” in 90 countries that will include the throwback toys.

It’s the latest quick-service restaurant to tap into nostalgia to excite customers. Since fast-food customers are not particularly loyal to any brand, fast-food companies must resort to marketing tactics or wacky food creations to draw in customers.

Here’s a brief history of the Happy Meal:

The Circus Wagon Happy Meal, as it was originally known, launched in the United States in June 1979. The meal included a hamburger or cheeseburger, fries and cookies. Some of the early Happy Meal toys included a McDoodler stencil, McWrist wallet and a spinning top. The box became instantly recognizable with the meal.

After becoming a hit in the United States, McDonald’s expanded the meal internationally. It debuted first in Latin America before hitting Australia and New Zealand.

McDonald’s added McNuggets as a Happy Meal option. The addition inspired a line of Happy Meal toys modeled after the McNuggets.

McDonald’s partnered with United Airlines to offer Happy Meals on some of its flights. The deal ended in 2001.

The first-ever global Happy Meal debuted with Disney film “Mulan.” The meal had identical packaging and toys across 40 countries.

As its customers shifted toward healthier eating habits, McDonald’s began overhauling the Happy Meal. In 2012, McDonald’s made the french fries portion smaller, and it added fruit as an option. In 2013, it added milk or juice as beverage choices.

McDonald’s said it would provide cheeseburgers in Happy Meals only upon request. It removed artificial preservatives from some of its entrees and added bottled water as a drink option. The company said that 3.4 billion fruit, low-fat dairy and water items have been served in Happy Meals in the US since 2013.

Starting next year, McDonald’s will add a new reduced-sugar and low-fat chocolate milk option. It has 25% less sugar compared to the previous version.