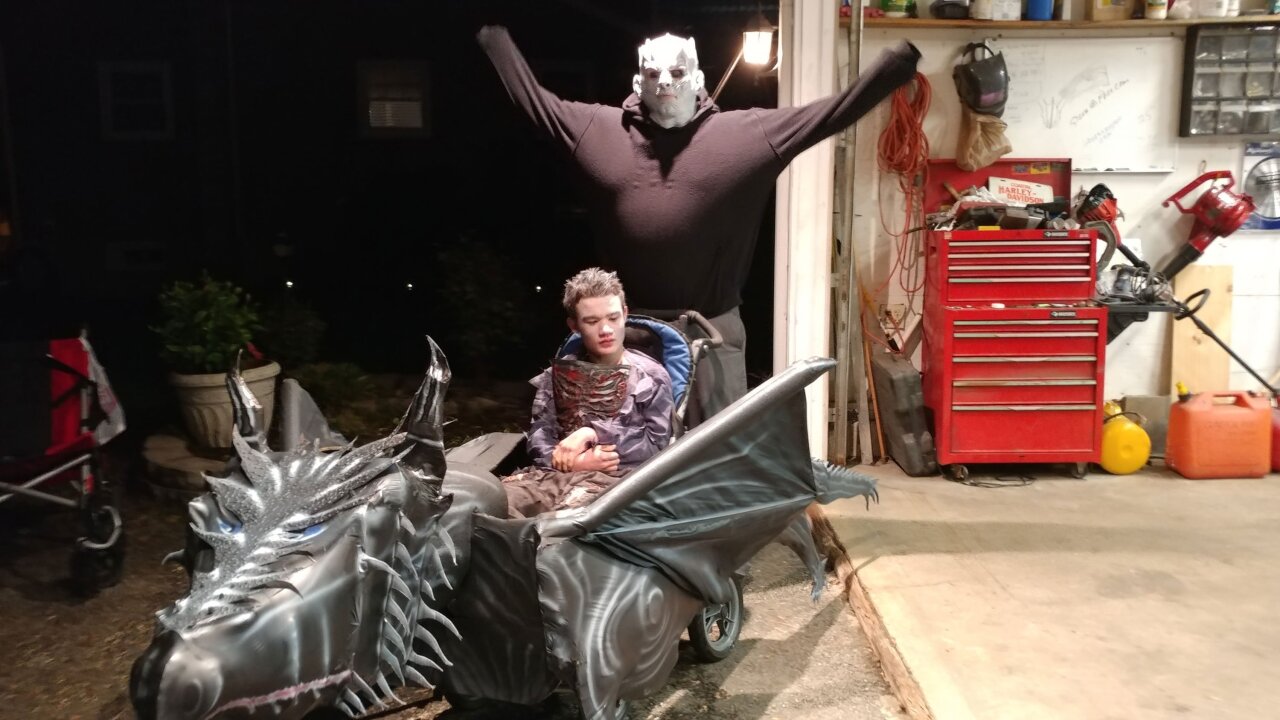 Tommy and Tom (dressed as the Night King from “Game of Thrones”) often dress as a duo for Halloween, with Tom pushing his son’s costume.

When his son was born, Tom Hardy and his wife pledged to treat him like any other kid.

But not every kid gets to rock Halloween costumes that would fit in nicely on a Hollywood set.

Hardy custom-builds elaborate costumes that fit his 15-year-old son Tommy’s wheelchair. And rather than stare at Tommy because of his chair, trick-or-treaters in Haverhill, Massachusetts, admire his awe-inspiring ensembles.

“No kid is looking at him like he’s in a wheelchair,” he told CNN. “It’s an amazing feeling for him, just to be seen as a typical kid.”

Tommy has cerebral palsy and autism. He’s legally blind and nonverbal, too, but none of that has stifled his love of trick-or-treating, his father said.

The tradition was borne out of necessity: No major chains sold wheelchair-inclusive costumes seven Halloweens ago when he first started, Hardy said.

So, he took a page from fellow parents of disabled children, who cooked up costumes that turned their kids’ chairs into race cars and princess carriages. While retailers like Target and Amazon now offer decorative wheelchair covers for children, progress Hardy welcomes, he won’t quit dreaming up stuff you’d never find in stores.

Tommy’s wheelchair has been a dragon and SpongeBob’s home

Tommy and Tom (dressed as the Night King from “Game of Thrones”) often dress as a duo for Halloween, with Tom pushing his son’s costume.

For the last seven Halloweens, he’s transformed Tommy’s chair into SpongeBob SquarePants’s pineapple dwelling (Tommy dressed as the titular sponge), a menacing dragon from “Game of Thrones” and an X-wing fighter straight out of “Star Wars.” CNN affiliate WFXT has highlighted the father-son duo’s Halloween hijinks for years, to Tommy’s glee.

This year, Tommy will pilot the world’s fastest aircraft, a U.S. Air Force SR-71 Blackbird jet. The costume is an homage to his grandparents, both Air Force veterans, who died this year.

For less than $100, Hardy and two buddies spent 100 hours handcrafting the jet out from wood. Photos of Hardy’s mother and father in their Air Force uniforms sit on Tommy’s dashboard — they always loved to see their grandson’s Halloween duds, he said.

Tommy took the jet out for a trick-or-treat test run last weekend. Some early Halloween revelers were so captivated by the outfit they didn’t even realize he was riding in a wheelchair. That’s the highlight for Hardy.

“We used to get frustrated, walking around with him in his chair,” he said. “But on trick-or-treat night, kids just look at him, laughing, like, ‘Wow, that’s amazing!’ He’s a typical kid that day.”