How the al-Baghdadi raid unfolded 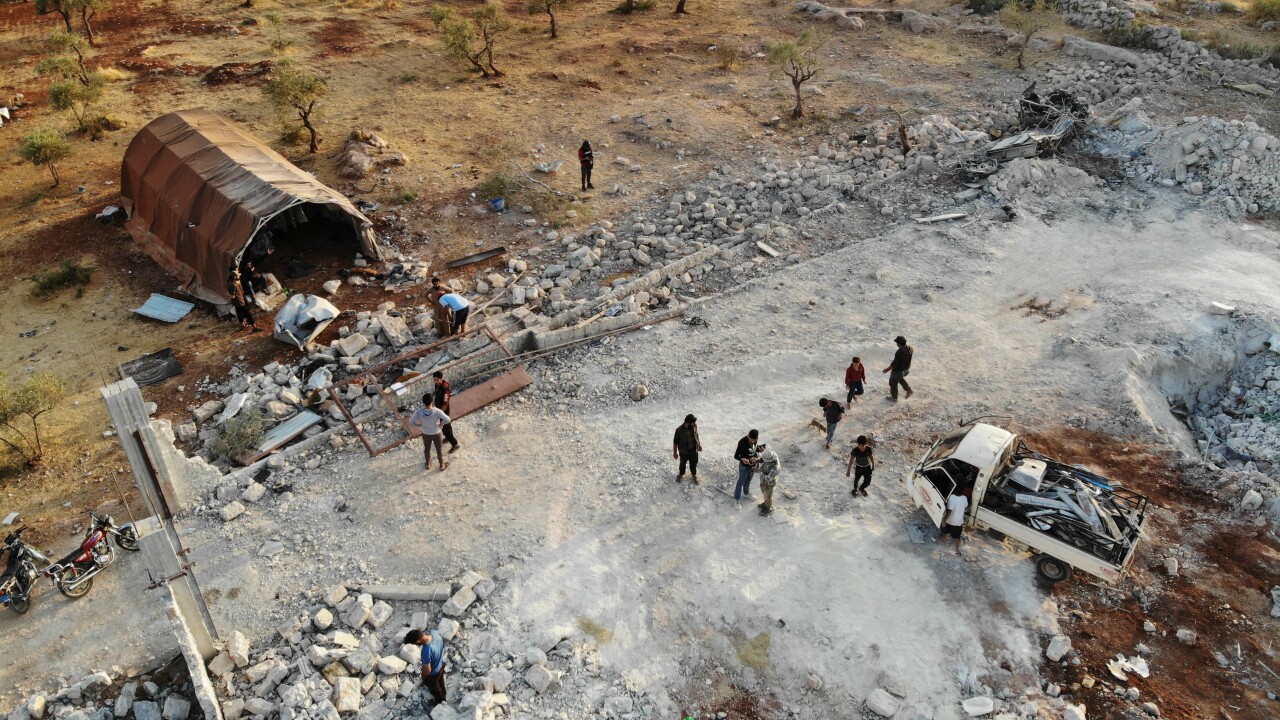 An aerial view taken on October 27, 2019 shows the site that was hit by helicopter gunfire which reportedly killed nine people near the northwestern Syrian village of Barisha in the Idlib province along the border with Turkey, where “groups linked to the Islamic State (IS) group” were present, according to a Britain-based war monitor with sources inside Syria. – The helicopters targeted a home and a car on the outskirts of Barisha, the Syrian Observatory for Human Rights said, after US media said IS leader Abu Bakr al-Baghdadi was believed to be dead following a US military raid in the same province. Observatory chief Rami Abdel Rahman said the helicopters likely belonged to the US-led military coalition that has been fighting the extremist group in Syria. (Photo by Omar HAJ KADOUR / AFP) (Photo by OMAR HAJ KADOUR/AFP via Getty Images)

President Donald Trump announced Sunday morning in a televised address at the White House that the “world’s number one terrorist leader” is dead.

ISIS leader Abu Bakr al-Baghdadi “blew himself up” when cornered by US forces who conducted a daring, two-hour nighttime raid on his compound in northern Syria, Trump said, providing a detailed account of the mission.

“Last night was a great night for the United States and for the world. A brutal killer, one who has caused so much hardship and death, has violently been eliminated,” he added.

Baghdadi’s death marks the end of a years-long hunt to find one of the most wanted terrorists in the world and the man who declared a so-called Islamic caliphate in Iraq and Syria in 2014.

It was the most significant announcement of the death of a terror leader since President Barack Obama revealed al-Qaeda leader Osama bin Laden had been killed by US Navy Seals in a dramatic late night address in May 2011.

“This is a devastating blow. This is not just their leader, it’s their founder. He was an inspirational leader in many ways. He formed ISIS in 2014, he led to establishing the physical caliphate throughout the region, so this is a major blow to them,” Defense Secretary Mark Esper told Jake Tapper Sunday on CNN’s “State of the Union.”

An aerial view taken on October 27, 2019 shows the site that was hit by helicopter gunfire which reportedly killed nine people near the northwestern Syrian village of Barisha in the Idlib province along the border with Turkey, where “groups linked to the Islamic State (IS) group” were present, according to a Britain-based war monitor with sources inside Syria. – The helicopters targeted a home and a car on the outskirts of Barisha, the Syrian Observatory for Human Rights said, after US media said IS leader Abu Bakr al-Baghdadi was believed to be dead following a US military raid in the same province. Observatory chief Rami Abdel Rahman said the helicopters likely belonged to the US-led military coalition that has been fighting the extremist group in Syria. (Photo by Omar HAJ KADOUR / AFP) (Photo by OMAR HAJ KADOUR/AFP via Getty Images)

How the raid unfolded

The covert operation started around 5 p.m. on Saturday evening as eight helicopters carrying teams of elite US troops, including Delta Force operators, flew exactly one hour and ten minutes over “very, very dangerous territory” towards the compound, according to Trump. Numerous other US aircraft and ships were also involved in the mission.

Some of the US forces originated from various locations inside Iraq, according to a US official.

“We flew very, very low and very, very fast. It was a very dangerous part of the mission. Getting in and getting out, too. Equal. We wanted an identical — we took an identical route,” Trump told reporters on Sunday while providing a detailed account of the secret mission.

While in transit, the helicopters were met with local gunfire. US aircraft returned fire and eliminated the threat, Trump said.

After arriving at the compound, US troops breached a wall to avoid a booby trapped entrance and that’s when “all hell broke loose,” the President added.

While clearing the compound, US forces killed a “large number” of ISIS fighters during a gun battle without suffering casualties, according to Trump.

At least two ISIS fighters were captured and 11 children were taken into custody. Two of Baghdadi’s wives were killed during the operation and their suicide vests remained unexploded.

Ultimately Baghdadi, who was also wearing a suicide vest, took refuge in a “dead end” tunnel with three children.

“He reached the end of the tunnel, as our dogs chased him down. He ignited his vest, killing himself and the three children. His body was mutilated by the blast. The tunnel had caved in on it in addition,” Trump said.

DNA tests that positively confirmed Baghdadi’s identity began “about 15 minutes after he was killed” and US teams on the ground “brought body parts back,” sources told CNN.

The President also said US forces obtained “highly sensitive material and information from the raid, much having to do with ISIS — origins, future plans, things that we very much want.”

“The raid was successful. We pulled our troops out. We had two minor casualties, two minor injuries, to our soldiers but a very successful, flawless raid,” Esper told CNN’s Jake Tapper Sunday.

President Donald Trump announced Sunday morning in a televised address at the White House that the “world’s number one terrorist leader” is dead.

How Baghdadi was found

While the military operation took place over the course of just two hours Saturday night, Baghdadi had been under surveillance for a couple of weeks, Trump told reporters, adding that two to three planned missions were scrapped before the successful one was launched.

Mazloum Abdi, the commander in chief of the Kurdish forces in Syria, said in a tweet the intelligence operations that led to the US military raid in Syria that killed Baghdadi began five months ago.

The CIA ultimately located Baghdadi and shared that intelligence with the Department of Defense, sources told CNN.

Trump and Vice President Mike Pence were notified about Baghdadi’s possible location “earlier in the week” and told Thursday that there was a high probability he was in the compound.

That is when the President ordered military commanders to begin drawing up specific options, which were presented on Friday, according to Pence.

“We knew a little bit about where he was going, where he was heading. We had very good information that he was going to another location. He didn’t go. Two or three efforts were canceled because he decided to change his mind, constantly changing his mind. And finally we saw that he was here, held up here,” Trump said.

“This was one where we knew he was there, and you can never be 100% sure because you’re basing it on technology more than anything else. But we thought he was there and then we got a confirmation,” he added.

In an interview with ABC on Sunday, Esper also offered additional details related to the decision-making timeline.

“Well the stars started lining up some time ago and in the past couple of weeks — week or so, the operational forces, which would — which were one of several options available to the President, started rehearsing and practicing and doing what they would have to do on the objective,” he said.

“And it wasn’t until Thursday and then Friday the President chose his option and gave us the green light to proceed as we did yesterday,” Esper added.

But the decision to move forward with the mission was not made until Saturday morning when the White House received actionable intelligence, Pence said.

White House National Security Adviser Robert O’Brien said Sunday that the US military operation was named after American Kayla Mueller who was held hostage by ISIS and killed in 2015.

Drama unfolded behind the scenes in the hours leading up to the raid as US military and intelligence officials scrambled to prepare before President, Pence, Esper, Chairman of the Joint Chiefs of Staff Mark Milley and other military officials gathered in the Situation Room around 5 p.m. Saturday, moments before the helicopters lifted off.

From there, Trump said he watched the raid unfold in real time, a moment that was documented in an image released by the White House on Sunday showing Trump surrounded by top military officials.

While the operation appears to have been led by the Pentagon, CIA director Gina Haspel and acting Director of National Intelligence Joe Maguire were also heavily involved throughout the process and were well aware of events as they unfolded on Saturday despite not being present in the Situation Room at the time of the raid, CNN has been told.

An ODNI spokesperson said Maguire was “fully aware and engaged in the planning. For the operation itself, he was out of town due to a pre-arranged engagement but watched with the CENTCOM commander.”

Haspel would have been monitoring from CIA headquarters and in touch with the Situation Room, similar to how former CIA Director Leon Panetta was positioned during the raid that killed al Qaeda leader Osama bin Laden in 2011.

The President thanked both Maguire and Haspel by name while answering questions from reporters on Sunday.

US officials kept details related to the mission close to the vest prior to the raid and didn’t notify key congressional Democrats that it was taking place.

The only hint that something may have occurred came in the form of a cryptic tweet from Trump at 9:23 p.m. on Saturday when most of Washington was focused on the baseball World Series taking place a few miles from the White House, saying: “Something big has just happened.”

Trump said Sunday that the some foreign nations, including Russia and Turkey, were notified ahead of time that the US was launching an operation but were not told the details of the mission itself or who the target was.

“Russia treated us great. They opened up. We had a fly over certain Russia areas, Russia-held areas. Russia was great. Iraq was excellent. We really had great cooperation,” the President told reporters Sunday.

“Turkey — we dealt with them. They knew we were going in. We flew over some territory. They were terrific. No problem,” he added.