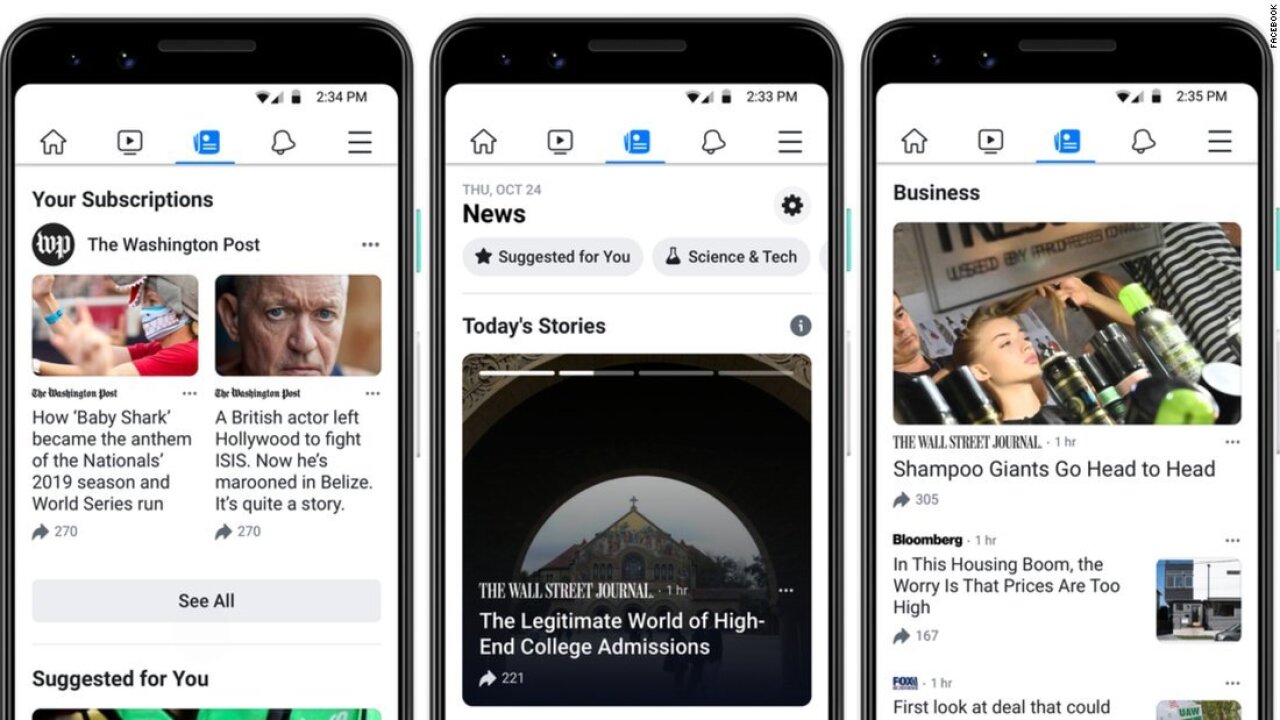 Facebook has a message for the skeptical news industry: We’re here to help. On Friday, the company is publicly introducing Facebook News, a new section of the app that will promote a wide variety of stories.

Facebook has a message for the skeptical news industry: We’re here to help.

On Friday, the company is publicly introducing Facebook News, a new section of the app that will promote a wide variety of stories.

The section is in a testing phase now, and it will become widely available to all Facebook users in a few months.

“This is a huge moment for our relationship with the news industry,” Facebook’s head of news partnerships Campbell Brown said in an interview with CNN Business.

“I know people have doubted us and our commitment to the news business,” she said. “This should signal that we truly want to be a champion for great reporting.”

Facebook has hired a handful of journalists to choose “today’s stories,” a top layer of important headlines that will appear when users first open the News section.

Algorithms will come up with personalized recommendations for further reading, tailored to the news “you read, share and follow,” the company says.

All of the stories come from outside sources -— Facebook isn’t producing any of its own news coverage.

Some publishers will be paid for opening up their content to Facebook, but others will not. It’s complicated.

And some local newsrooms, already struggling, are worried about being left behind.

“It’s great that Facebook is willing to pay the New York Times and Washington Post, among other national news organizations, but while the tech giant is doing that, newspapers in smaller markets across the country are closing up shop and every day more of America is becoming a news desert,” said Larry Gilbert, Jr., the audience engagement editor for the Sun Journal newspaper in Lewiston, Maine.

Gilbert said Facebook has not contacted any of the sister papers, which represent most of Maine’s big titles, about a distribution deal.

Like many other journalists, Gilbert said he worries about the stories that won’t be covered without local newspapers. “What happens to rural states and small market cities when there’s no one to cover them?” he asked. “Will there be none 10 or 15 years down the line because Facebook decided ‘we’re too small’ for them?”

Facebook has anticipated the concern. The company says it intends to include a greater number of publishers in the future.

For now, Brown said, “it’s a range, from big publishers like CNN to more niche publishers that cover specific interests.”

The payments — millions of dollars per year in some cases — are designed to make sure Facebook has access to all sorts of news coverge to fuel its algorithms.

The participation of two Rupert Murdoch properties — News Corp and Fox — is noteworthy because Murdoch and News Corp CEO Robert Thomson have been incredibly critical of tech giants like Facebook. The company is reportedly developing its own news aggregator to compete with Big Tech.

“If Facebook wants to recognize ‘trusted’ publishers then it should pay those publishers a carriage fee similar to the model adopted by cable companies,” Murdoch said in January 2018.

Thomson will be at an event in New York City with Mark Zuckerberg on Friday in a show of public support for Facebook’s News section.

Brown, a former CNN anchor, declined to get into the details of the publisher payments.

“We want to make sure we are supporting their businesses,” she said.

The potential upside for Facebook is obvious: A News section could make Facebook more valuable to its users.

“We think people can have a better news experience on the platform,” she said. “We also want to connect publishers with the people who are most interested in their content.”

The addition of the new section also may mitigate some of the criticism that is constantly directed Facebook, from detractors who say the company’s ad business has done untold damage to the news industry.

Regarding Gilbert’s concern about Maine, Facebook said in a Friday blog post that the initial test phase will include “local original reporting by surfacing local publications from the largest major metro areas across the country, beginning with New York, Los Angeles, Chicago, Dallas-Fort Worth, Philadelphia, Houston, Washington DC, Miami, Atlanta and Boston.”

“In the coming months,” Facebook said, “we’ll include local news from Today In, our local news and community information tab, which recently expanded to over 6,000 US towns and cities.”