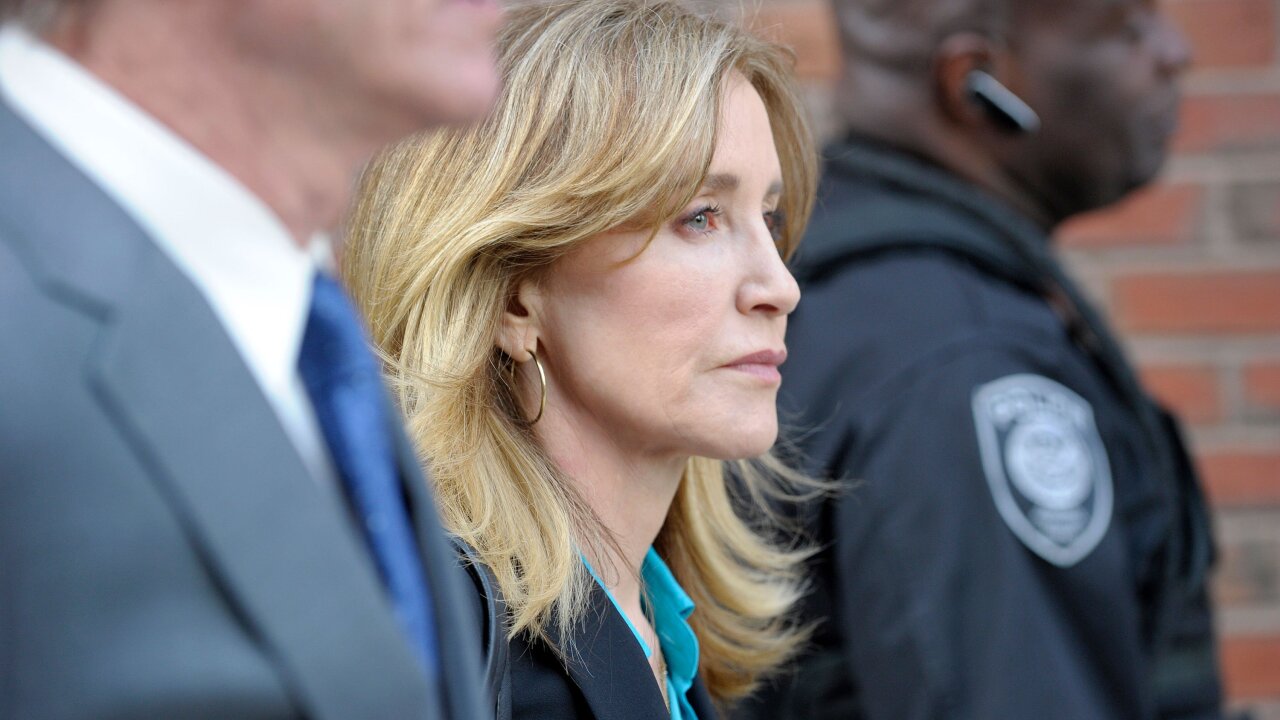 The public got its first look at actress Felicity Huffman’s life in prison as photos and a video taken Saturday showed her walking in a green prison uniform.

DUBLIN, Calif. — The public got its first look at actress Felicity Huffman’s life in prison as photos and a video taken Saturday showed her walking in a green prison uniform.

The “Desperate Housewives” star was spotted in a dark green jumpsuit in the low-security federal prison in Dublin, California, five days into her two-week prison sentence for her role in the college admissions scam. In the photos and video, Huffman is wearing glasses, a white hat, black sneakers and a watch on her right wrist.

Huffman reported to FCI Dublin on Tuesday and is the first of more than 30 parents charged in the case to begin serving a prison sentence.

The actress pleaded guilty to conspiracy to commit mail fraud and honest services mail fraud for paying $15,000 as part of a scheme to cheat on her daughter’s SAT test scores.

Actress Felicity Huffman has been spotted in a dark green jumpsuit in the low-security federal prison in Dublin, California, five days into her two-week prison sentence for her role in the college admissions scam https://t.co/nXCnMXfl3Z

She will ultimately serve 13 days in prison because of time credited for the day she spent in federal custody after being arrested in March, according to a Federal Bureau of Prisons spokesperson. She was also sentenced to a year of supervised release, ordered to do 250 hours of community service and fined $30,000.

“In my desperation to be a good mother I talked myself into believing that all I was doing was giving my daughter a fair shot,” Huffman said in a letter to the court. “I see the irony in that statement now because what I have done is the opposite of fair. I have broken the law, deceived the educational community, betrayed my daughter and failed my family.”

In court during her sentencing, Huffman apologized to the judge, her daughters and her husband, actor William H. Macy.

“I am deeply ashamed of what I have done,” she told the judge. “At the end of the day I had a choice to make. I could have said, ‘no.'”

Huffman also echoed that sentiment in a statement released to the media, saying, “There are no excuses or justifications for my actions. Period.”

“And I especially want to apologize to the students who work hard every day to get into college, and to their parents who make tremendous sacrifices supporting their children,” she said in her statement.

The federal correctional institution in Dublin is considered a “low security” prison with 1,235 female inmates in Alameda County, about 35 miles outside of San Francisco.

So far, 10 parents who pleaded guilty to conspiracy fraud have been sentenced for their roles in the college admissions scam.

The punishments have ranged from five months in prison for Agustin Huneeus Jr., who participated in both the test-cheating and athlete-recruitment aspects of the scheme, down to no prison time for Peter Jan Sartorio, who paid $15,000 to have answers corrected on his daughter’s exam.