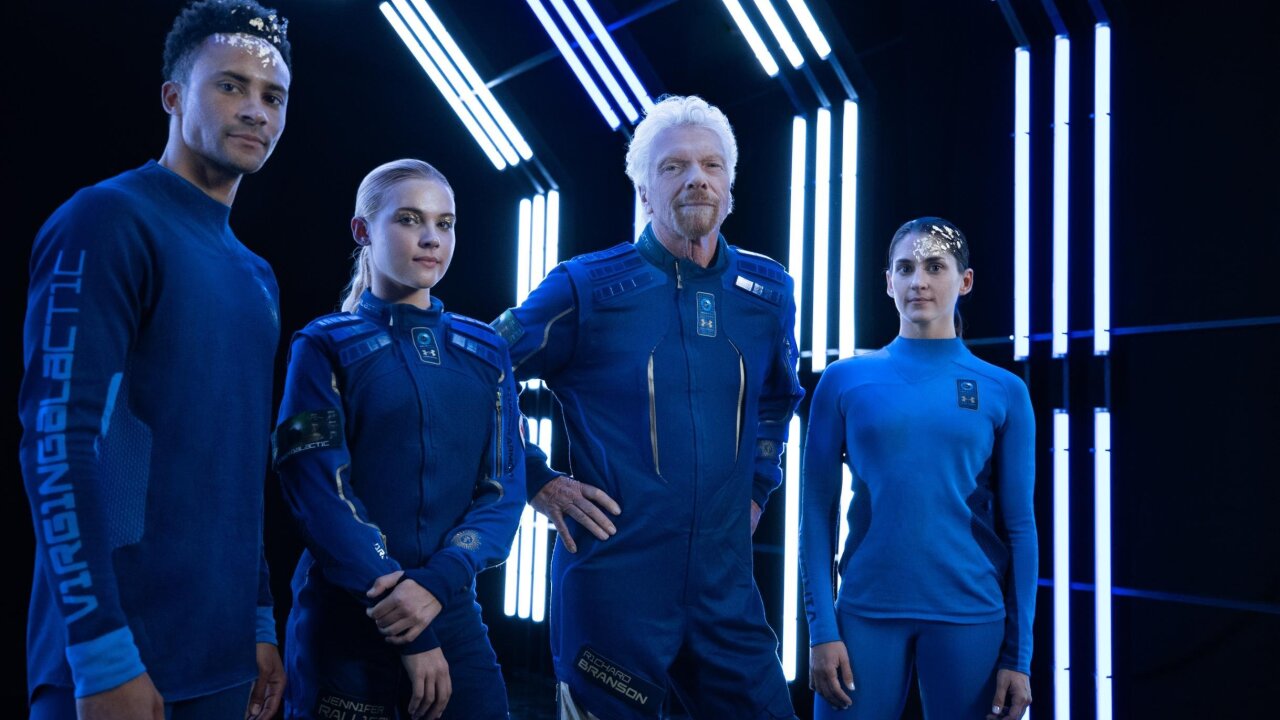 Virgin Galactic, the space tourism startup that could be months away from its first commercial flight, unveiled its line of Under-Armour-made spacesuits for passengers.

Virgin Galactic, the space tourism startup that could be months away from its first commercial flight, unveiled its line of Under-Armour-made spacesuits for passengers.

The royal blue jumpsuits are made of lightweight “flight-grade” fabric designed to keep customers comfortable as they hurtle more than 50 miles into the atmosphere at up to three times the speed of sound. The material is made from special yarn that Under Armour says can help regulate body temperature.

The Under Armour space gear includes a base layer, spacesuit, footwear, a training suit and a jacket.

At a press conference Wednesday morning in Yonkers, Galactic’s CEO, British billionaire Richard Branson, put on one of his signature PR stunts, with dancers wearing the spacesuits inside a zero-gravity simulation chamber. Branson also donned his own spacesuit, which he plans to wear as Virgin Galactic’s first passenger after the company finishes its test flights. Commercial service is expected to begin next year.

Flight suits, like those worn by Galactic’s test pilots or Air Force pilots, are not known to be particularly comfortable or easy to move around in. But Branson told CNN Business that he found his Under Armour suit to be “ridiculously comfortable.”

Even for a company that regularly outfits professional athletes, executives at Under Armour said there was a steep learning curve to design an ensemble fit for spaceflight. The company had to create something that would meet safety requirements, such as ensuring the suits aren’t flammable and would keep passengers safe during intense G forces. They also wanted to design for comfort and aesthetics. Under Armour designer Nick Cienski said he watched “Battlestar Galactica” and other sci-fi TV shows and movies for design inspiration.

“Going to space presents an entirely new challenge for us,” Under Armour CEO Kevin Plank said. “We’ve had to put a dedicated team at the very best at Under Armour that’s been working day and night.”

Plank told CNN Business that a few items, including a limited number of space boots and Galactic T-shirts, will be sold to the public. But the spacesuits will be made specifically to fit Galactics individual customers, and Under Armour’s participation was not about creating the next must-have consumer product.

He said he’s frequently asked about the burgeoning athleisure market, “but what we keep coming back and saying is that we’re going to push the pinnacle of performance and pushing human performance as far as it can go,” Plank said. “That’s the basis of our brand”

The company researched what its passengers will endure aboard Galactic’s rocket-powered plane, called SpaceShipTwo, which will ride to about 40,000 feet while strapped to a massive mothership. Then, the space plane will detatch, fire up its engine and swoop straight up with its two pilots at the controls. At the peak of the flight, customers will experience a few minutes of weightlessness and can peer out the plane’s windows at Earth’s curved horizon and the blackness of outer space.

About 600 people already have reserved tickets to ride aboard a Virgin Galactic flight, at prices up to $250,000 apiece.

From takeoff to landing, the entire mission will last under two hours. That’s brief for a spaceflight, so the passengers won’t be have to wear the same type of protective gear required of NASA astronauts when they travel into Earth’s orbit.

Ondrej Doule, who works on spacesuit designs at Florida Tech, told CNN Business that suborbital flights present unique challenges, because the human body must endure rapid changes in G forces — from up to six times the normal weight of gravity to weightlessness and back, all within minutes.