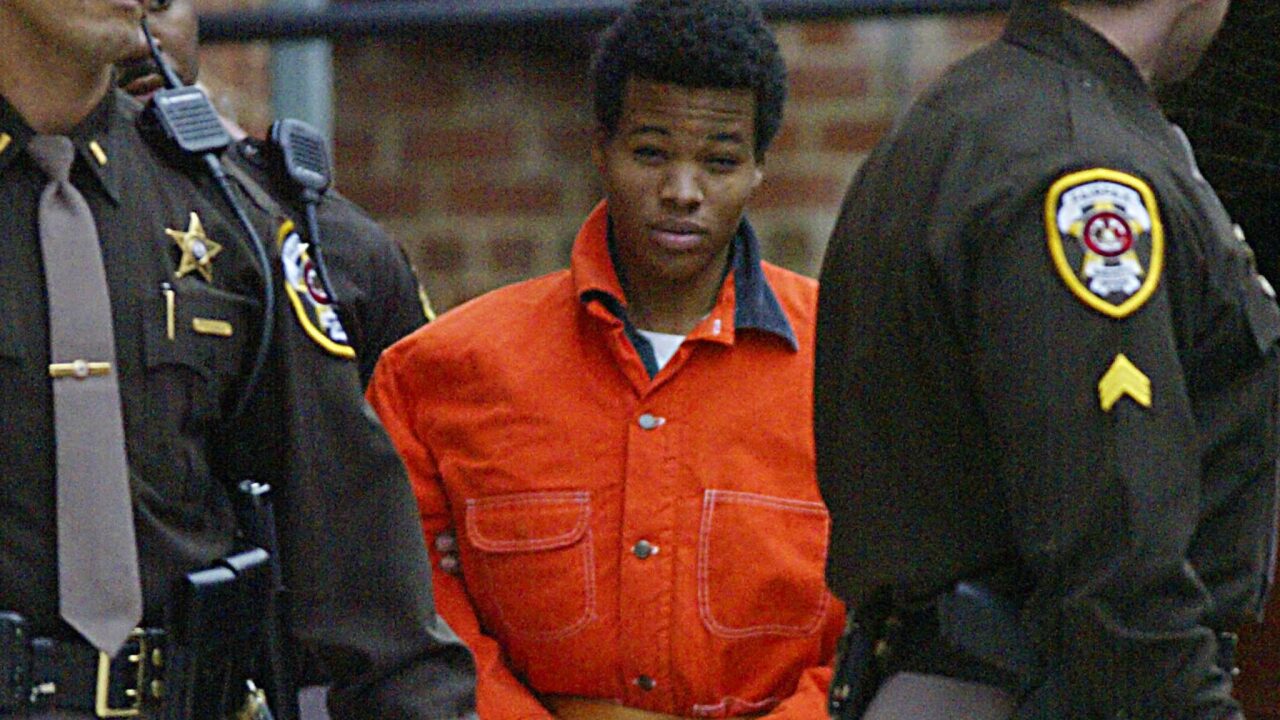 FAIRFAX, : Sniper suspect Lee Malvo (c) leaves a pre-trial hearing at the Fairfax County Juvenile and Domestic Relations Court 04 December 2002 in Fairfax, Virginia. Malvo is a suspect in a sniper style killing spree. It has been reported 02 July 2003 that a change of venue has been ordered by Fairfax County, Virginia, Circuit Court Judge Jane Marum Roush , who was worried about a fair trial for the suspect. The trial will be moved to Chesapeake, Virginia, about 200 miles south of Fairfax County. AFP Photo/Luke FRAZZA (Photo credit should read LUKE FRAZZA/AFP/Getty Images)

WASHINGTON – The United States Supreme Court will hear oral arguments Wednesday over whether to uphold Virginia’s life sentences without parole imposed on Washington sniper Lee Boyd Malvo for murders and other crimes committed when he was 17.

Malvo and his partner, John Allen Muhammad, terrorized Washington, Maryland, and Virginia in a series of shootings that killed 10 and wounded three others beginning Oct. 2, 2002. The infamous “D.C. snipers” were apprehended 22 days later at a rest stop near Myersville, Maryland.

The Supreme Court will decide whether Malvo’s life sentences without parole in Virginia – imposed for crimes he committed as a minor – violate Eighth Amendment protections against cruel and unusual punishment.

In 2012, the Supreme Court ruled that individuals who committed crimes as minors could not be given mandatory life sentences in prison without parole unless their crimes indicated “permanent incorrigibility.” Their ruling would also be applied retroactively.

Malvo’s attorneys contended in their brief to the high court that regardless of whether a state’s sentencing structure is “mandatory” or “discretionary,” the 2012 ruling protects a minor from life sentences without parole.

Attorneys for Randall Mathena, warden at the Red Onion State Prison in Virginia where Malvo is being held, argue that because Virginia doesn’t impose mandatory minimum sentences for capital murder, his sentences are exempt from the ruling’s review.

A federal judge in Virginia ruled Malvo’s sentences should be vacated due to the 2012 ruling. Upon appeal by Mathena, the Fourth Circuit also ruled Malvo was entitled to a new sentence. Mathena subsequently appealed to the Supreme Court.

Malvo’s accomplice, Muhammad, was 41 at the time of the attacks and sentenced to death by lethal injection in Virginia in 2004. He was executed in 2009.

Attorneys for Malvo had used an insanity defense, claiming he had been “indoctrinated” by Muhammad and operated under his control. A jury in Chesapeake, Virginia, rejected that defense and convicted him.

Malvo was illegally brought into the United States from Antigua by Muhammad – an ex-soldier and expert rifleman – who then trained him in military tactics for almost a year.

Virginia imposed on Malvo a total of four life sentences in prison without parole in 2004.

Malvo has spent years appealing his sentences on multiple fronts.

Greenberg wrote in his ruling that Judge James Ryan, who had sentenced Malvo in Montgomery County, “affirmatively considered all the relevant factors at play” and found Malvo “irreparably corrupted,” according to the Washington Post.

Malvo’s attorneys are appealing that decision.