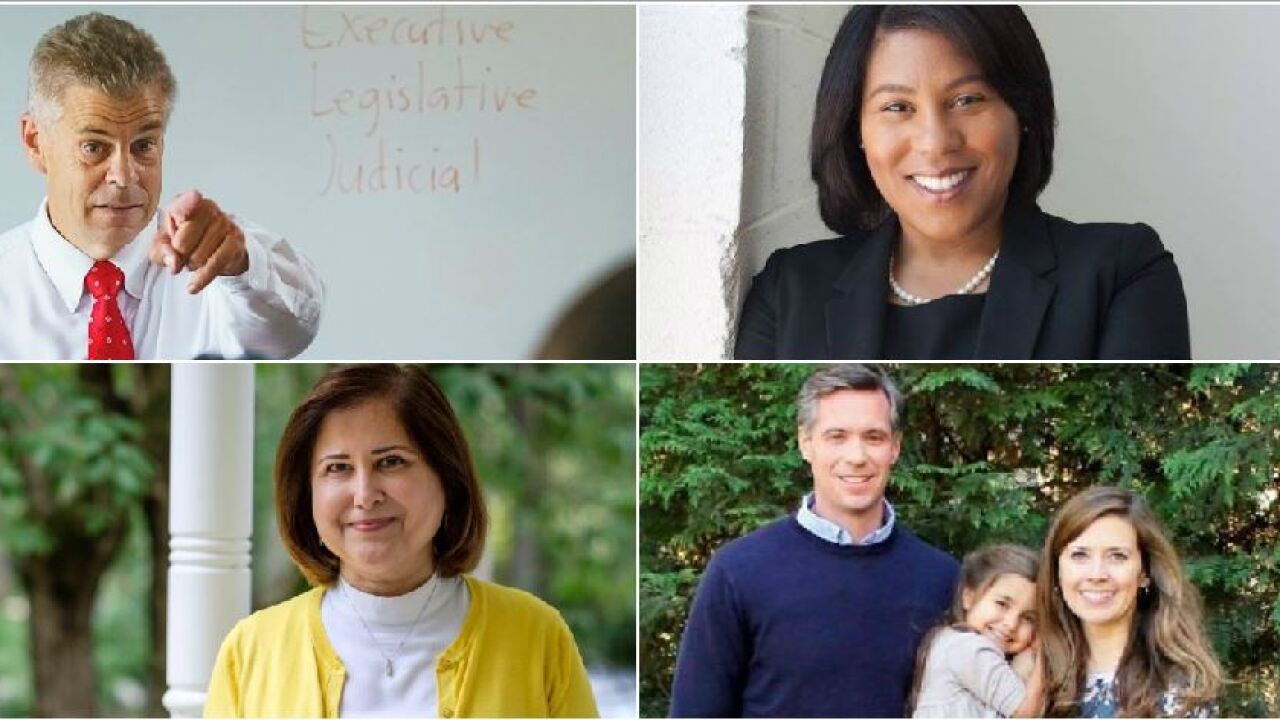 A crowd of around 100 people filled Studio A of Virginia’s home for Public Media, and more tuned in to hear the debate live on-air. The candidates answered questions submitted by the audience in addition to ones written by hosts ChamberRVA and VPM.

Cox, who was elected unanimously as Speaker of the House in 2018, and Bynum-Coleman, now in her fourth political bid for a House district win, fielded questions on a variety of issues including budget priorities, housing, health care, gun control, climate change and civil rights.

Bynum-Coleman, a small business owner, said she was inspired to run for office by her son, who has a learning disability.

Bynum-Coleman and Cox agreed that education is a top legislative priority. Bynum-Coleman seeks to increase teacher pay as well as funding for schools and trade programs.

Cox, a retired teacher, also wants to raise teacher salaries to the national average. He added that he would focus on building the state’s cash reserve — currently over $1 billion — in the 2020 budget session.

Both candidates agreed that Virginia should remain ranked No. 1 for business but Bynum-Coleman emphasized that the state should focus on workers.

“I’m a small business owner, and we also have to make sure that Virginia is No. 1 for workers,” Bynum-Coleman said. “We’re talking about corporations versus people.”

Cox said “discrimination should be against the law,” even though bills such as HB 2067 and HB 2677 to end anti-LGBTQ discrimination in work and housing did not make it past Republican-led House sub-committees in the regular legislative session. Cox said that state employment decisions should be merit-based.

On the same issue, Bynum-Coleman said legislators should put measures in place so no one is discriminated against based on gender or sexual orientation.

Candidates were asked if they believe in climate change.

Cox did not directly respond yes or no, but did say the state needs to be smart about alternative sources, that he has worked very hard on clean water and coastal flooding issues and that he’s against taxpayers absorbing costly energy tax policies.

Bynum-Coleman said she believes in climate change and wants the state to go beyond federal government requirements to ensure clean water and clean air. She talked multiple times about “stopping the chemicals that are going into our water.”

In response to defining common sense gun legislation and gun regulation, Cox recognized that gun violence is a “serious problem” but sidestepped a direct answer to the question on restrictions. He pointed to the “constitutional rights of law-abiding citizens” and that Virginia has a lower crime rate than states with “more aggressive measures” for gun control.

Bynum-Coleman, whose daughter was shot in 2016, “wholeheartedly” wants universal background checks, which she said has support across the political spectrum and even among “a group of National Rifle Association members.” She also said she wants to ban bump stocks.

About two-thirds of the crowd remained for the second debate between Sturtevant and Hashmi.

Sturtevant began by stating that his main priority is “continuing to be an independent voice for this district.” Sturtevant referenced a $25,000 donation that Gov. Ralph Northam made to Hashmi’s campaign via The Way Ahead PAC, saying that the donation “bought her silence” during the governor’s blackface scandal earlier this year.

Hashmi and Sturtevant had different views on whether Richmond’s Confederate statues should remain in place along Monument Avenue. Sturtevant supports leaving the monuments, but adding historical context.

“I don’t think that just tearing down statues is the right way forward,” Sturtevant said. “Future generations will forget what was done here — and why — and America’s original sin of slavery.”

Hashmi, a professor at Reynolds Community College, countered his point by saying she teaches history through facts, but she doesn’t “teach history through Confederate monuments.”

“What kind of a message do we send to visitors to our city when we have edifices that glorify a Confederate past?” Hashmi said.

The Senate candidates differed on Medicaid and gun control but both acknowledge climate change.

Sturtevant cited taxes as a reason he was opposed to Medicaid expansion, but he does not support rolling it back. Hashmi said expanding access to Medicaid is “an important first step” on lowering the costs of health care and wants to ensure access to health care “for all Virginians.”

Sturtevant said he also believes in climate change, but said that there is no need to “destroy Virginia’s economy” while addressing climate change.

The 66th District was one of 25 House districts redrawn earlier this year after the U.S. Supreme Court upheld a lower court’s ruling that the previous map was racially gerrymandered. Chesterfield County voters account for 78% of the district, which also includes the cities of Colonial Heights and Richmond.

The 66th District is projected to be 32% more favorable to Democrats than in the past, according to the Virginia Public Access Project. Republicans have held the 10th District — which voted for Democrats in the 2018, 2017 and 2016 elections — since a special election in 1986 — 33 years. Chesterfield and Richmond voters make up the bulk of the district, in addition to Powhatan County.

Cox has accrued the largest war chest of all House candidates, raising over $1.1 million. Bynum-Coleman has raised $470,308 in the same period.