How these wild horses are helping firefighters after Lt. Brad Clark’s death 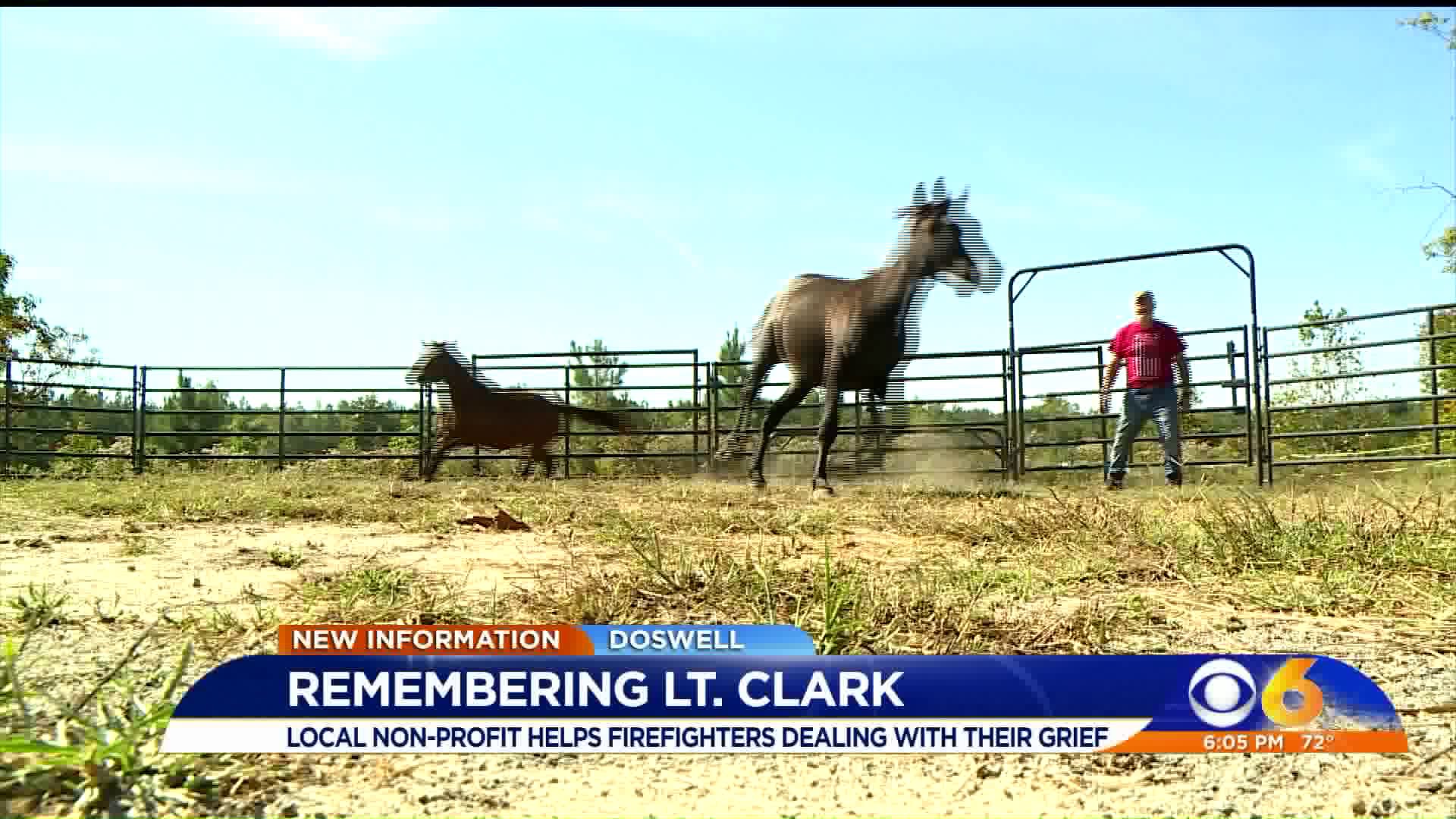 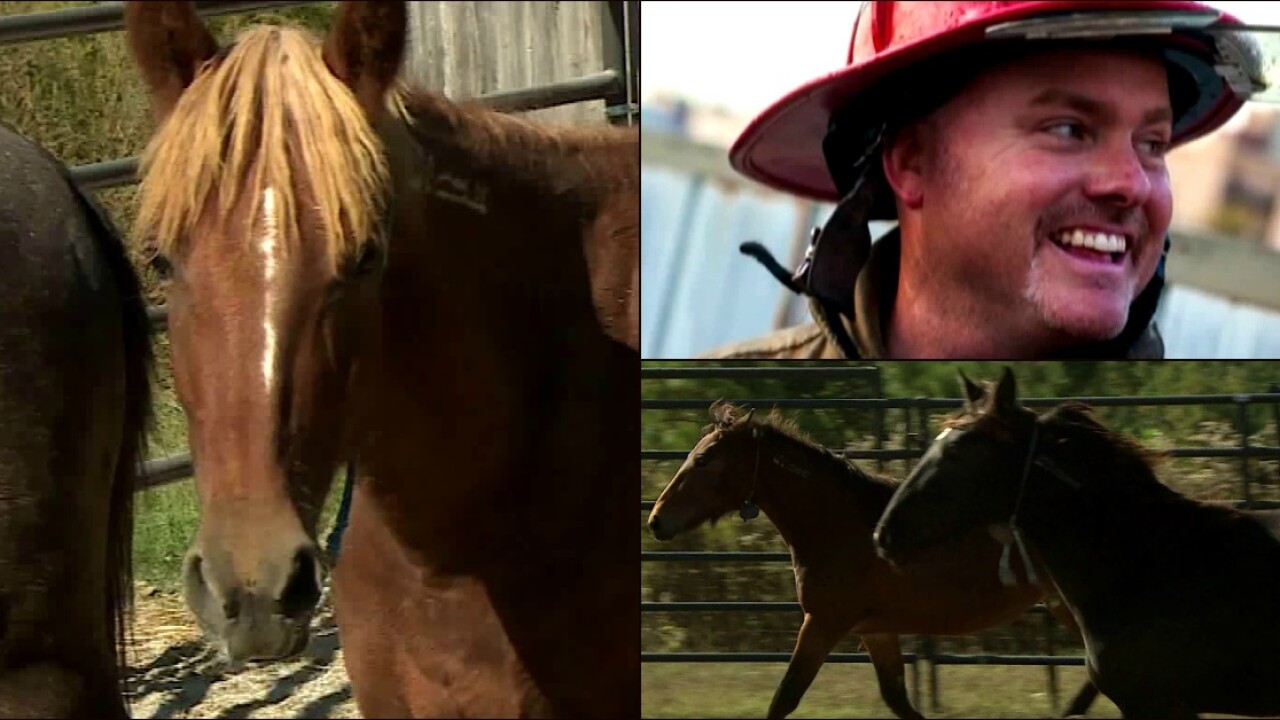 DOSWELL, Va. -- Friday marked one year since Hanover County Fire-EMS Department (HCFD) Lt. Brad Clark was hit and killed by a tractor-trailer while responding to an accident along I-295 in the middle of Tropical Storm Michael.

To mark the anniversary, the fire department wanted to raise awareness about a non-profit that it said helped them cope with not only the loss of Lt. Clark, but also the help ensure the mental health of the firefighters still serving.

The organization, Checkpoint One, specializes in helping first responders, active-duty or retired military members, and their immediate families deal with the stresses of their career, such as post-traumatic stress or anxiety, through “non-riding Equine Assisted Therapies” along with stress-management tactics "at no cost and no insurance requirements.”

Checkpoint One Executive Director Andrew Kaufman said the non-profit was born out of his own journey after a 20-plus year career in the U.S. Army, which included being injured in Iraq in 2004.

“I was in the V.A. [Veterans’ Affairs] system, I was on all the drugs, I was drinking, my family had alienated me, I had alienated all my friends and family and was introduced to a program called Boulder Crest Retreat up in Bluemont, Virginia,” said Kaufman. He said that program introduced him to horses in a non-riding way. “And as a result of that program, I knew that when I was very calm and relaxed.”

Kaufman, along with several others, co-founded the non-profit in October 2016 and by January 2017 they started on their property in Doswell.

“Horses is our primary mode of allowing to explore and work through what they need to, but we do yoga, we do mindfulness, we do meditation, we teach breathing,” said Kaufman. He added the teach people to recognize the signs of symptoms that bring them to whatever triggers their trauma or anxiety. “Understand it and be able to put these piles back together from whatever exploded in their head, put them back in these Tupperwares and be able to access them and understand and know that they were in a situation that they had no control over and how they deal with it now. And how they learn to respond to different situations instead of to react to certain situations.”

The non-profit first connected with the HCFD in 2018, when it helped develop the department’s PEER Support Team.

HCFD Battalion Chief Gregory Martin said the team is a group of firefighters trained to assist with identifying and talking about mental health with other firefighters. He added while they are not certified counselors, they can identify these issues and help connect someone with resources to get further help.

“What happens is, if that is able to, actually, assist the person or individual that needs help then that’s a great opportunity to just, kind of, talk and be able to get some of that off your chest, but, if not, it allows us to find resources that are outside of the fire department in the clinical field so that our members can further assist with whatever mental issues they may have,” said Martin.
Martin said since the team was already in place by the time Lt. Clark’s death occurred, they were able to assist in supporting those HCFD firefighters reeling from it.

“We were able to bring in outside resources almost immediately so that we could make sure that everyone in the department could be touched and checked on and maintained,” said Martin. “And one of the things that really was put in place was we had a system where we could find and provide continued care to our personnel even afterwards, that we still utilize today.”

Martin said one year removed from his death, it has not gotten easier, but the department has moved forward together.

"Not an average thing, not something that happens to every fire department. However, our personnel have been working very close and very hard to deal with that and the resources we have been given through Checkpoint One and through some of the other outside agencies have really helped and made a difference,” said Martin. "We are a strong organization and we remain that way due to the hard work and commitment of the men and women who serve in our ranks. Each day we continue to heal and find strength in one another.”

Along with honoring Clark (and retired HCFD Lt. James Kegley) last weekend at the 38th National Fallen Firefighters Memorial Weekend in Maryland, Martin said the PEER Support Team was holding a luncheon Friday for HCFD members to allow them to come together.

Martin added that along with helping get the PEER Support Team established, the non-profit has also hosted HCFD firefighters for team building exercises and individual therapy sessions. He said for the individual sessions, it lets the firefighters spend time offline, doing something they normally wouldn’t do, and work through emotional issues.

“Which kind of gives them a break from those settings while working with other team members, with the clinicians to allow them to work through their emotions and understand their feelings as far how things have taken place over time and how they’re dealing with that,” said Martin. Martin added that he has taken part in the team building program. “It was a great experience to be able to, kind of, let your guard down and let them interact with you and allow you to, kind of, just be who you are, which a lot of times is difficult. You know, we have this persona of who we are and what we are and what we want to project and when it comes to horses and equine therapy, you have to let all that go and just let things happen. And, you know, for an ‘A-type’ personality of a firefighter and so forth, that’s a little difficult a lot of times.”

And come this November, HCFD and Checkpoint One will be teaming up together to help launch a new program at the non-profit: Mustang Gentling.

The non-profit received four wild horses, mustangs, from Nevada from Lifesavers Wild Horse Rescue and over a three-day event, eight participants, including two from HCFD, will work with professional gentler to help tame the horses.

“And what they’ll have the experience to do is go into a round pen with an experience, professional gentler and work one-on-one with the mustang to get them started on their gentling journey,” said Kaufman, who added this will not be done using whips, ropes, or other methods people may recall seeing the movies. “Everybody thinks that a wild mustang, ‘I gotta get that first touch’, they’re going to be yelling and screaming and all that. What is boils down to is the experience between the individual and the horse, helps them gentle themselves. It’s a lot of communication, it’s a lot of body language. It can be a very emotional event. But it allows them to see themselves in a horse.”

The event is also working as a fundraiser for the non-profit and the public is invited to buy tickets and watch the taming/gentling take place. The three-day event will conclude with a screening of the movie, “The Mustang,” and a discussion with one of its actors, Thomas Smittle.

After the three days, the horses will be put up for adoption. The participants will be given the first opportunity, followed by members of the public (who meet certain criteria). If no one adopts the horses, they will remain at Checkpoint One to work in the equine therapy program.

The event runs from Nov. 8-10 at the Meadow Event Park in Doswell.