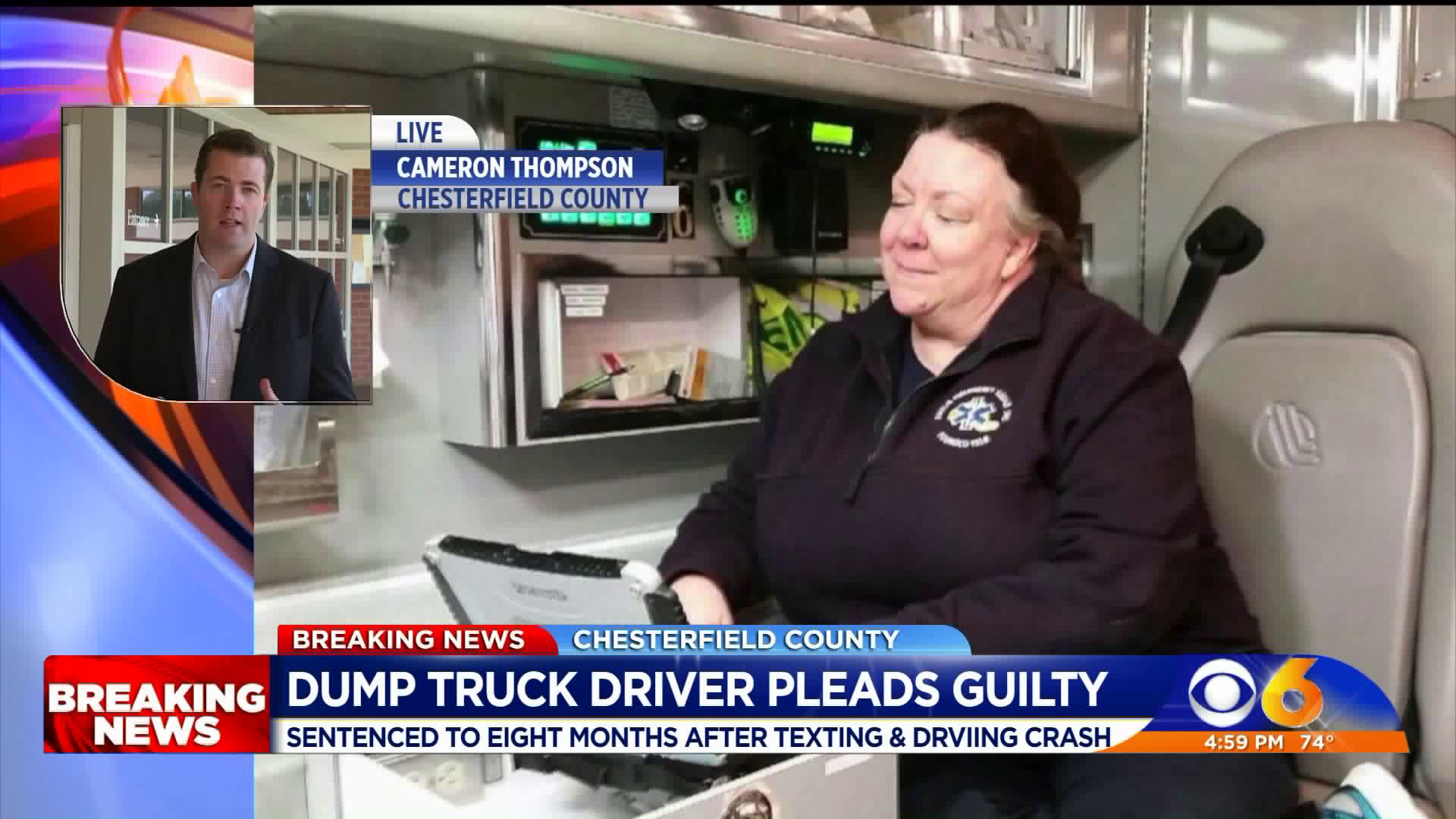 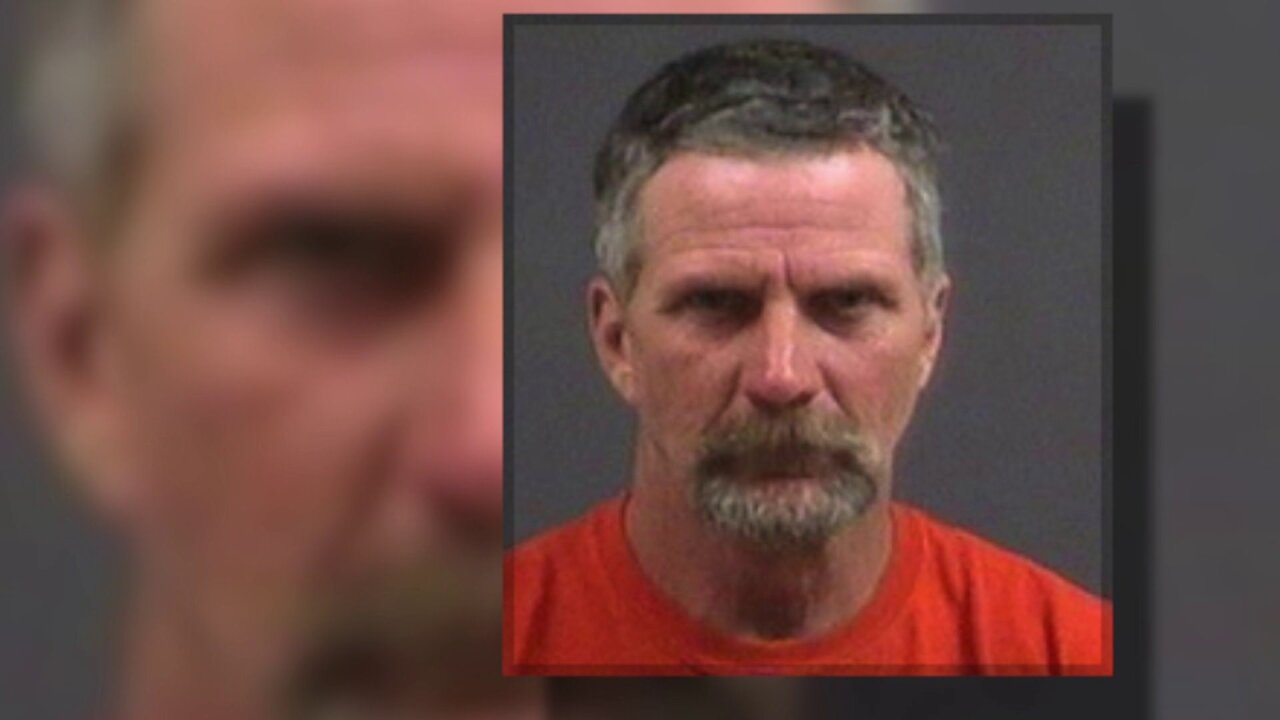 CHESTERFIELD COUNTY, Va. -- A dump truck driver who was texting his girlfriend about Valentine's Day before a fatal February 13 crash pleaded guilty to involuntary manslaughter inside a Chesterfield courtroom Thursday.

Samuel Allebaugh II, 58, admitted he was texting while driving when his dump truck crashed into a Honda driven by 56-year-old Karen Giles. Giles was pronounced dead at the scene.

The guilty plea was part of an agreement that would see Allebaugh sentenced to nine years in prison with all but eight months suspended.

Allebaugh was texting while driving when his dump truck crashed into Giles’ car.

Sentenced to 9 years, all but 8 months suspended. @CBS6 pic.twitter.com/jg1ntAON5R

In court, prosecutors laid out the facts of the case as agreed upon by both parties.

They said that on February 13, 2019, Allebaugh was driving in the 17200 block of Genito Road. Immediately before the crash, they said Allebaugh was texting with and receiving texts from his girlfriend.

Prosecutors said the distraction caused him to veer off the road to the right. He then over corrected and went into oncoming traffic, hitting Giles’ car at almost a right angle.

Prosecutors added that when Allebaugh was first interviewed by police at the scene of the crash, he told them he had been texting, but not when the crash happened.

They said Allebaugh referenced some text messages he had sent to his girlfriend, but when he handed his phone over to police, they could not find those texts. Prosecutors said police asked Allebaugh if he deleted any texts and Allebaugh said he could have.

Prosecutors said when police did a digital forensic scan of the phone, they found two messages had been deleted that showed Allebaugh was texting and getting texts immediately before the crash happened.

The family of Giles was in court for the plea hearing and her daughter, Meredith Spies, said the crash was “so incredibly senseless and preventable,” and it has left her in a “cloud of sadness.”

“She was always there for me. It didn’t matter what she had going on. If I called her she would drop everything to help me or do whatever she can for me,” Spies told CBS 6 afterwards. “I know she loved me and my husband and our kids.”

In court, Spies told Allebaugh that she forgave him and was praying for his recovery.

“I don’t think it was ever anything intentional on his part, so, for me to forgive him wasn’t anything that was difficult.” added Spies. “That’s forgiveness that we all have through Christ and it’s something that I was so glad that I was able to share with him today.”

When given a chance to speak, Allebaugh turned to Giles’ family and apologized, but said he knew that “no words I can say to express my sorrow and remorse.”

"It was so nice to hear it face to face. It’s hard, but it’s good at the same time,” said Spies.

Giles was a paramedic for the Amelia Emergency Squad with more than 30 years of experience.

“She was a leader and kind of like a pioneer for women in that field, so a lot of people looked up to her and she had a lot of influence,” said Spies. “I’m glad that she did so much with her life while she was here.”

Spies said she was happy with the plea agreement, adding she wanted to ensure Allebaugh was charged with a felony.

"Not a slap-on-the-wrist misdemeanor of reckless driving, but something that has serious consequences to the lives of those around you and since this has happened I’ve seen so many people texting and driving and it makes me so mad because of what happened to my mom and we’re hoping that this sets precedent for future cases of texting and driving where someone is hurt or potentially killed, too,” added Spies.

Another aspect of the plea deal is that once released, Allebaugh must complete 125 hours of community service related to raising awareness about distracted driving/texting while driving and sharing his story.

"And hopefully deter them from repeating the same mistakes as him. That was something that was important to us because it could have a lasting impact,” said Spies.

Spies added that she plans on becoming active in preventing texting and driving and distracted driving incidents.

“I want to speak out about it and get people just aware of the consequences and change the legislation in Virginia so that it’s something, like I said, that’s seen as important,” said Spies.