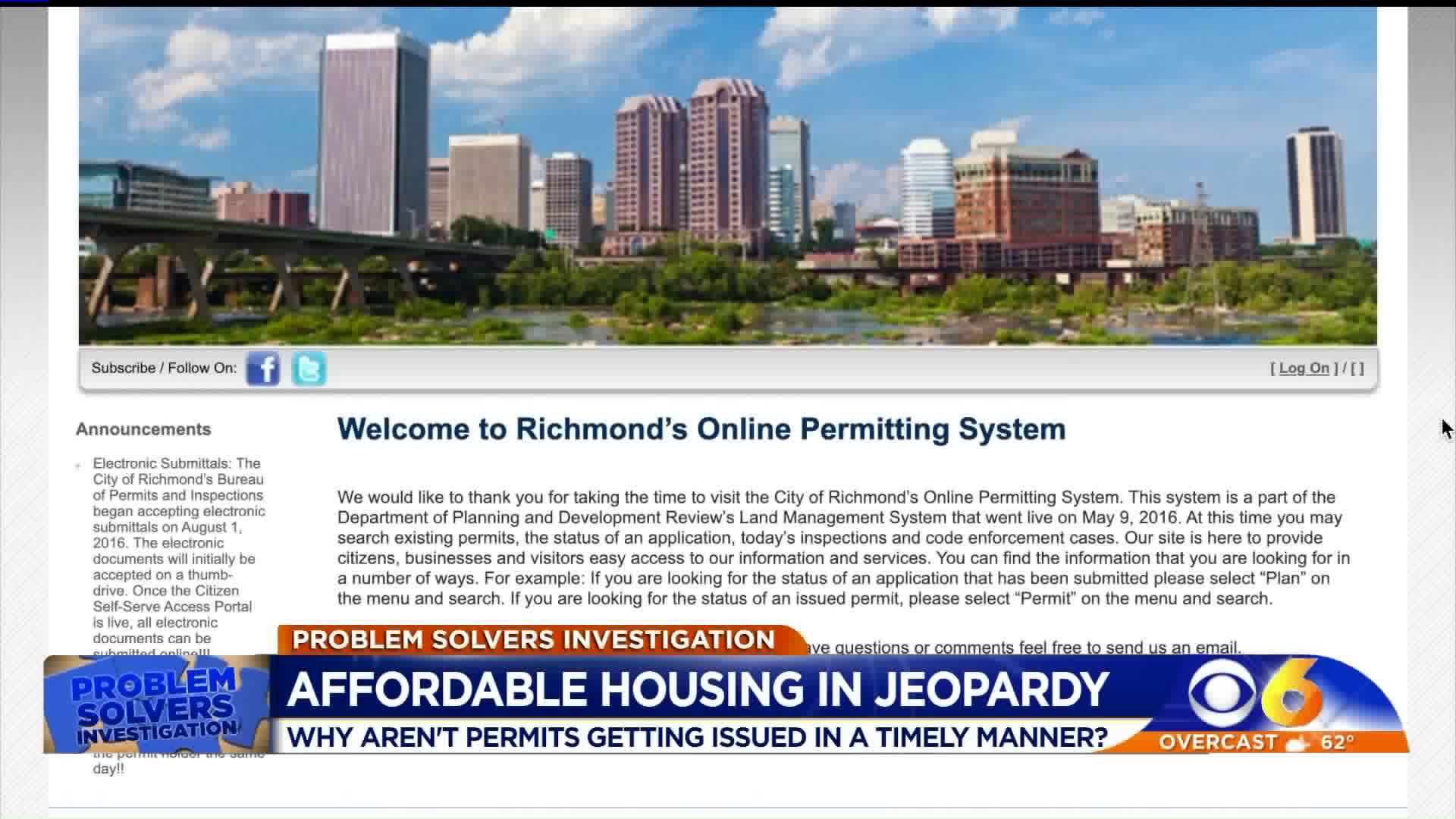 RICHMOND, Va. -- An area builder says his plans to bring affordable housing options to Southside Richmond are in jeopardy thanks to major delays out of the city’s Permits and Inspections office.

“I’ve never seen anything like this,” said developer Jackie Coalson.

Jackie Coalson purchased property off Walmsley Boulevard back in March.

The developer submitted plans to Richmond’s Permits and Inspections office for the future Governor’s Retreat subdivision June 3. The proposed 37 home development would offer FHA financing to new homeowners. More than three months later, construction equipment is parked where Coalson says homes should already be going up.

“Everything is sitting because the city didn’t do their job. We’ve spent 560 some thousand dollars in cash on this property since March cleaning up trash, taking out unsafe structures, trying to clean this area up getting it ready to go and I still don’t have a timeline right now from the city not even a projection,” said Coalson.

“When Chesterfield and Henrico and Hanover treat those developers as family and we treat them as what outsiders we don’t want you. This is the message that the mayor is sending we don’t want you,” said 8th District City Councilwoman Reva Trammell.

Every month that passes, Coalson says is a loss of close to $100,000 in overhead expenses, contracts falling through and his employees without work.

“A lot of city people government people work on a salary we don’t. We’re only as good as our last deal and if the deal don’t go down we’re no good we don’t eat,” said Coalson. I’ve got people facing financial difficulties who work for us because they can’t get full work because of what the city has done to us.”

Coalson also is concerned about the delay pushing construction into the winter months.

“You run into a bad winter it could be six to eight months behind with everything which is going to cost a lot more money in the long run and we’re trying to develop affordable homes,” said Coalson.

An audit of the Richmond Permits and Inspections office released August 13, 2019 showed the office did not reach its permitting issuance goals last year and auditors determined that it needed ‘significant improvements.’ Of the 100 permits analyzed, inspectors found that 18 percent took more than 30 days to issue.

Auditors also found the office was only fully staffed 14% of the time in the 12 month period.

The Homebuilding Association of Richmond says the industry is frustrated with the decade old problem.

“They’re extremely frustrated, this is the same issue that we’ve seen for over a decade so the city auditor report actually mirrors the conclusions that were released in a report over a decade ago to the same tune and no action has been taken so it’s been a decade of inaction.” said Homebuilding Association of Richmond CEO Danna Markland. “These builders are providing investments in the city they’re revitalizing communities they want to provide affordable housing and the more added time the more added cost of labor that is a direct result of the inefficiencies and delays in the cities permits and inspections office that adds to the cost of the home which doesn’t help anyone.”

“It is a systemic problem of we are now out of the recession we have been booming for the last four or five years the number of our permits have doubled since just two years ago and we’ve not kept pace with that from a staffing stand point so we’ve been starting to add new staff,” said Richmond Deputy Chief Administrative Officer Sharon Ebert.

"We clearly are understaffed we had a low morale issue Jason's trying to address the morale issue we're trying to bring on more staff in a provisional and temp as we get to filling the backlog of vacancies so we’ve brought on five new people getting the online portal open so that should take away a lot of the foot traffic and waiting unnecessarily for permits,” said Ebert.

The city also plans to revamp its website to make it more user-friendly.

“We should have separate processes and steps on what you have to do to get your permit,” said Ebert. “It should be very very clear very very simple it’s not clear to me so I don’t know how it can be clear to our customer so that’s the first thing I am trying to fix.”

The city acknowledges what took a decade to get to this point won`t get fixed overnight but Ebert hopes to make significant improvements in the next six months.

“We are chipping away at it,” said Ebert. “We are focused on the fix,” she added.

Ebert says she has investigated Coalson’s case and says he has a legitimate complaint.

“We’re trying to resolve the open issues we’re trying to work through it as quickly as possible and that’s where the communication piece comes in we don’t have a coordinator that coordinates the review it’s one of things I am working on trying to set up,” Ebert said.

“We can get these communities working but we can`t do it unless we get the permits so we can work and that`s the bottom line,” said Coalson.

Coalson says if he doesn’t get his permits soon he could lose his financing for the project.