How depression prevented Richmond woman from realizing she was pregnant: ‘He makes me want to fight’ 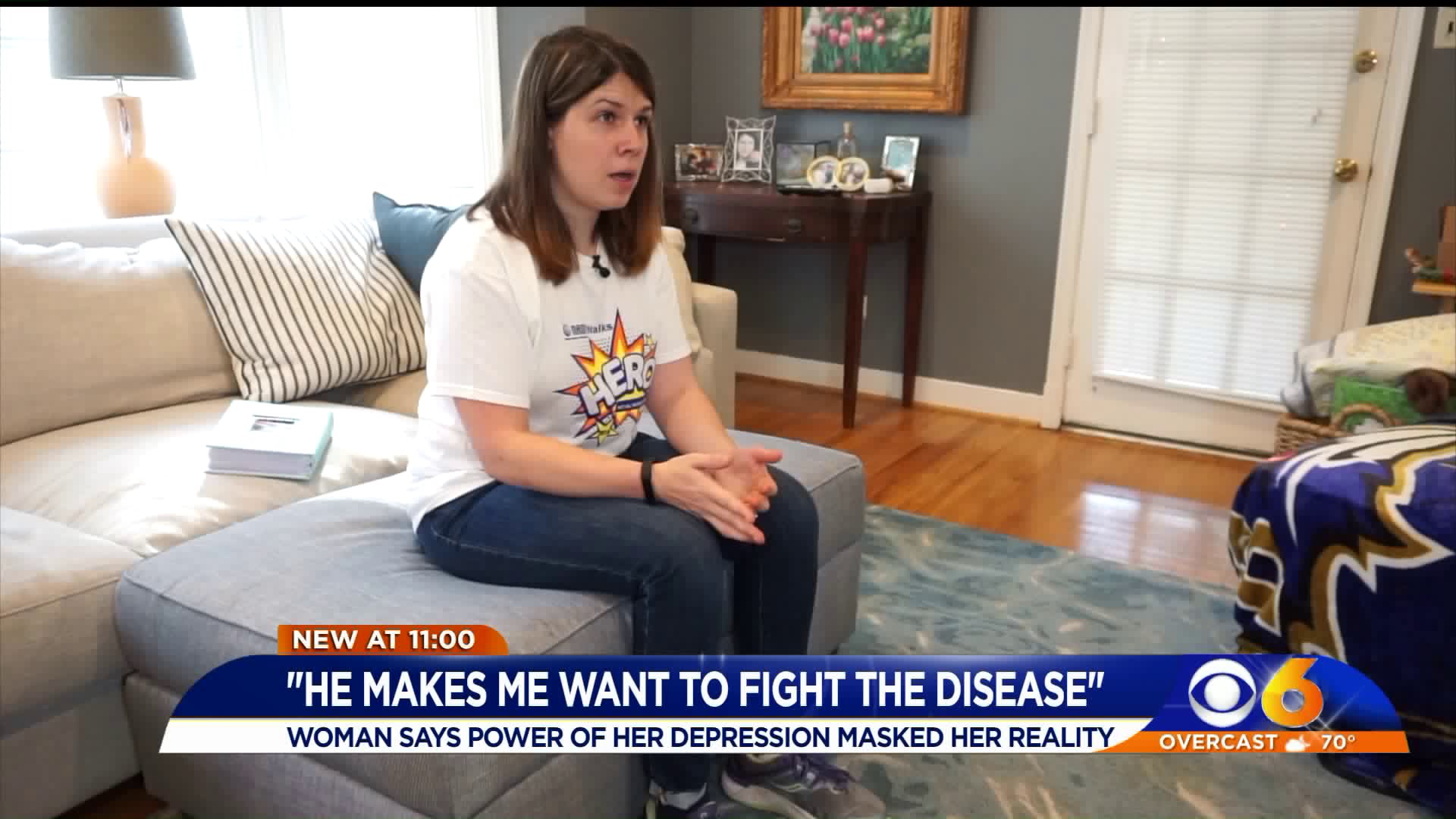 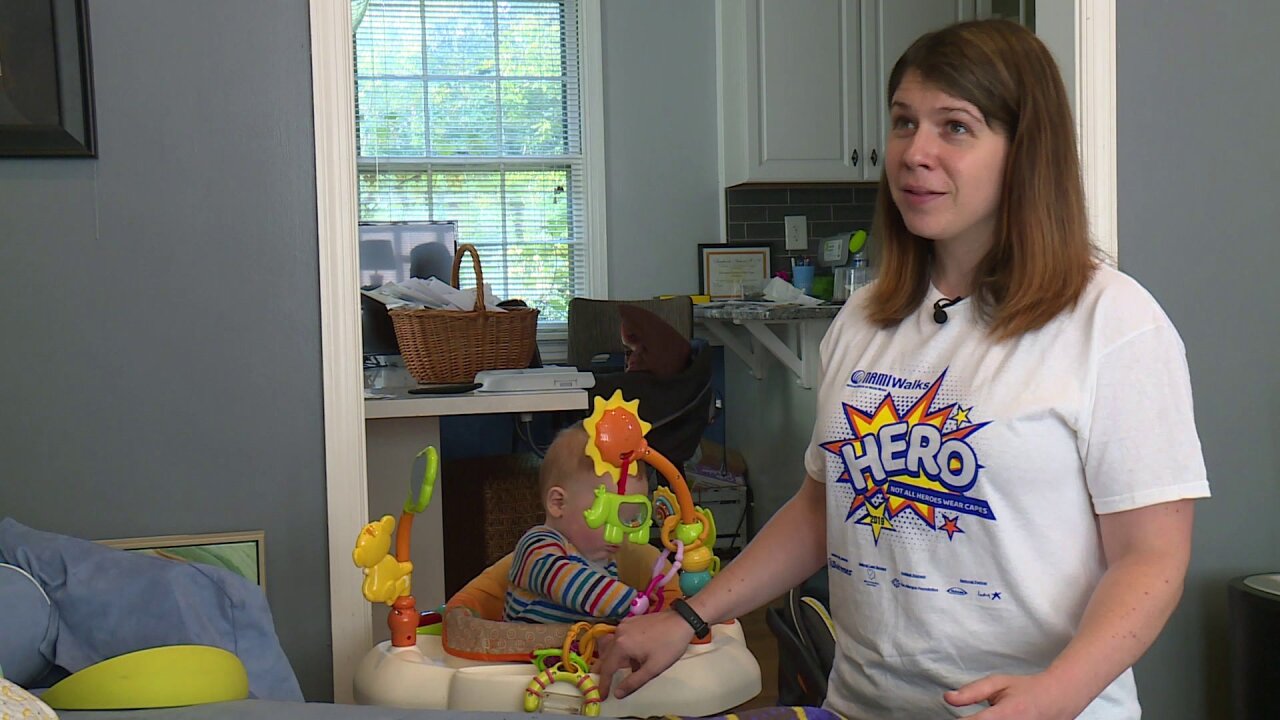 RICHMOND, Va - Lying on the floor of a local Gold's Gym last year, Caitlin Reynolds realized for the first time something was wrong.  For months, Reynolds had been suffering a depressive state after a recent diagnosis of bipolar disorder, but until that gym class, she did not know she was seven months pregnant.

"I had a certain reality that I was focused on.  It didn’t even pop into my mind that I could have been pregnant," Reynolds said.

Now the mother of a bubbly, happy nine-month-old boy, Reynolds is sharing her story to show the true power of mental illness, and how the disease can mask itself from even those who are experiencing it.

In early 2017, Reynolds had recently married her longtime boyfriend and was working her "dream job" as a grant writer for the Maymont Foundation.  It was during that timeframe Reynolds said she had sleepless nights that would last weeks on end and had trouble focusing on her work.  She did not realize at the time she was experiencing a manic episode.

"You think that you’re on top of the world, and you can become obsessed with particular ideas or causes like I painted this entire living room one night," Reynolds said during an interview at her south Richmond home.  "During that time I was dropping the ball at my job, and it was causing a lot of discord in my marriage."

Reynolds was forced to leave her job and found out the manic episode was related to bipolar disorder.

According to National Institute on Mental Health, bipolar disorder causes unusual shifts in mood, energy, activity levels, and the ability to carry out day-to-day tasks.  The NIMH reports bi-polar episodes can include manic and depressive swings that can last years in some cases.

"Once I came down from the manic episode, I went into the depressive episode," she said.  "It’s kind of like, once you’re in the depressive state, having blinders on like a horse.  "You can only see through a lens that is very foggy.”

During the months after her diagnosis, Reynolds said her depression caused her to develop some bad habits, and she gained about ten pounds.

"When I stopped working out and was eating cake every day, I naturally thought the weight I was gaining was from the depression and also I was on birth control," she said.

Then, she attended the gym class.

"I touched my stomach, and it was hard.  I thought to myself either this class is really effective and I have six-pack abs or something is up," Reynolds said.  "I thought I was maybe a few months along, but when I went to the doctor the next day, they told me I was seven months pregnant."

Two months later, her son Rowan was born.  It was December 2018, and Reynolds had emergency cesarean section surgery after getting into a car accident on Chippenham Parkway.

"I remember that morning because the depression I was in was so thick," Reynolds said.  "Rowan came into the world in a very dramatic fashion, but he really did help snap me out of that very depressive state when he was born."

Rowan's doctors told Reynolds and her husband he shows no signs of developmental issues or any other health concerns.  During his mother's interview with CBS 6, Rowan giggled and cooed while playing with his baby rattle.

Reynolds now works for NAMI Virginia, a mental illness awareness and advocacy group.  Although she still struggles with depression occasionally, Reynolds credits support from her family and NAMI Virginia with helping in her healing.

"I didn’t feel so much judgment once I decided I wasn’t going to let what other people thought of me affect me, and I think that’s extremely important when dealing with mental illness because it is such a stigmatized disease that people do not understand," she said.

More than 46 million Americans suffered from a mental illness in 2017, according to the CDC, and more than 11 million people suffered a severe mental illness during that same timeframe.

Reynolds said she wanted to share the story of her pregnancy to show the powerful effects of mental illness and to help remove the stigma that surrounds it.

The biggest factor in her path toward healing was Rowan, Reynolds said.

"I call him my little baby spy.   He was working within me when I was in my lowest state and was determined to be this ray of sunshine coming into my life," she said.  "He is my motivation, and I can’t wait for every single stage of life that he goes through, be able to walk him through.  He makes me want to fight the disease so that I can be there for him."

Registration for the 5k is free and the event is open to the public.  Reynolds is a big-time fan of the event's slogan this year, which is "not all superheroes wear capes."

"People with mental illness really are superheroes because they are fighting a secret, invisible battle that other people can’t see," she said.